Dismantling these fallacies might be especially challenging in America, in whose young mind Emerson’s cry of rugged individualism still reverberates: “Trust thyself: every heart vibrates to that iron string.” But half a century of quiet, empirically unassailable research into the nature of nature — of which, lest we forget, we are a (frequently reluctant) part — indicates that the symphony orchestra of life is only sonorous when we trust one another.
A generation after one of humanity’s deepest-seeing poets insisted that “anyone who hasn’t been in the Chilean forest doesn’t know this planet,” Benyus illustrates the delicate mutualisms that make our rocky planet a living world with studies of Chilean mountain plants, which huddle together for protection from ultraviolet rays and harsh weather, forming complex relationships of support. A single six-foot cushion plant, or yareta, can house a multitude of wildflowers in its thousand-year-old mound. Farther down the mountain, resilient trees take root on rockfalls to create tear-shaped “tree islands” that shelter seedlings from the wind, carpeted with leaves and needles from nearby trees that decompose into moisture reservoirs for the dry summer days. These tree islands grow as mammals come for shelter and birds come to roost, depositing other seeds with their metabolic output. As the islands drift over the centuries, they carry fertile new soil across the mountainside, leaving new communities of life in their wake. Benyus distills the lesson of this living lee:
Now we know that it’s not just one plant helping another; mutualisms — complex exchanges of goodness — are playing out above- and belowground in extraordinary ways.
One of the fallouts of our fifty-year focus on competition is that we came to view all organisms as consumers and competitors first, including ourselves. Now we’re decades into a different understanding. By recognizing, at last, the ubiquity of sharing and chaperoning, by acknowledging the fact that communal traits are quite natural, we get to see ourselves anew. We can return to our role as nurturers, each a helper among helpers in this planetary story of collaborative healing.

In a passage that strikes me as the ecological counterpart to Chinua Achebe’s lovely notion of art as “collective communal enterprise,” she envisions an alternate possible future and considers what it asks of us:

The more stressful the environment, the more likely you are to see plants working together to ensure mutual survival.

Alongside activists, poets, policymakers, and other scientists, Benyus is one of the frontier-women decolonizing climate leadership — visionaries united by a fierce willingness to contend with the big, unanswered, often unasked questions that leaven our possible future and to begin answering them in novel ways worthy of a world that prizes creativity over consumption and pluralism over profiteering. Their voices and visions rise from the pages of All We Can Save: Truth, Courage, and Solutions for the Climate Crisis (public library) — Ayana Elizabeth Johnson and Katharine K. Wilkinson’s altogether inspiriting anthology, composed as “a balm and a guide for the immense emotional complexity of knowing and holding what has been done to the world, while bolstering our resolve never to give up on one another or our collective future,” and titled after the final verse of Adrienne Rich’s immense poem “Natural Resources,” written the year the young Benyus faced the ironwood tree with her uneasy spray can:
Whether it comes in the form of shading, shielding, nourishing, or defending, facilitation allows plants to expand their niches, to thrive where they would normally wither. Landscapers, farmers, and foresters may want to mimic these moves by planting for partnership, including wind blockers, soil holders, water lifters, and nutrient boosters in their mixtures. As plants deal with shifting growing zones, a facilitation partner could make all the difference. 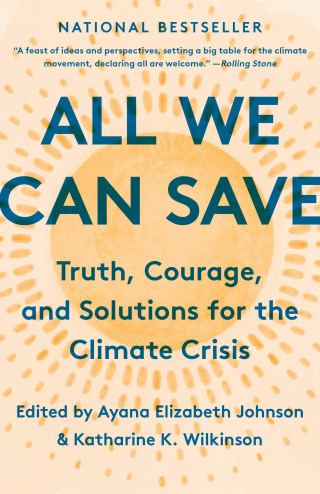 With an eye to Suzanne Simard’s epoch-making research into the “wood-wide web” through which trees communicate, she adds:

To read these strategies is to discover a manual for how life evolved on a challenging planet and how natural communities heal and overcome adversity — essential reading for a climate-changed world.
She was told not to question the dogma, not to be “so Clementsian” — an allusion to the visionary work of ecologists Edith and Frederic Clements, a century ahead of their time in the empirically grounded insistence that plants are not rugged individuals in combat for biological capital but a collaborative community of life.
In the second essay from the anthology, titled “Reciprocity,” Benyus recounts her early reckoning with the misguided model of ecological relationships and reflects on the half-century of research into the strategies plants actually use to thrive — research revealing cooperation rather than competition as the animating force of life:

My heart is moved by all I cannot save:
so much has been destroyed
But while the vast majority of terrestrial plants are entwined in such underground mycelial networks of mutualism, these relationships are severed in agricultural fields, where plowing savages the delicate underground network of resource-sharing, while the regular infusions of nitrogen and phosphorus fertilizers decimate the vital bacterial and fungal members of that microcommunity. Benyus considers the heedless tradeoff between the immediate rewards of seasonal crops and the deep, rich sustainability of ecosystems across the sweep of time:

When communities of vegetation breathe in carbon dioxide, turn it into sugars, and feed it to microbial networks, they can sequester carbon deep in soils for centuries. But to do that, the communities need to be healthy, diverse, and amply partnered. If we’re to encourage wild and working landscapes to recoup the 50 to 70 percent of soil carbon that has been lost to the atmosphere, we’ll want to pause before plowing a field, opening a bag of fertilizer, or marking a sapling for removal. We wouldn’t want to interrupt a vital conversation.

That young forester grew into the biomimicry pioneer Janine Benyus. Now swimming in the ever-growing sea of studies that defy the dogma of competition by illuminating how plants succor and sustain each other’s survival, she reflects:

In 1977, a young forestry student tasked with marking an ironwood tree for “release cutting” — the logging or poisoning of particular trees on the dogmatic premise that their demise would release more commercially valuable nearby trees from competition for light and nutrients — suddenly felt uneasy holding the can of orange spray paint, disquieted by the awareness that old-growth forests have thrived for millennia without such amputations, intuiting that something far more complex and mutualistic might be at work beneath the surface story of resource rivalry.

Drawing on the spirit of biomimicry — the borrowing of processes and principles from nature to make our endeavors in the human world more effective and elegant — Benyus intimates the obvious analogy to the zero-sum fallacy upon which the modern world is built: The scarcity model underpinning capitalism might be just as unrealistic, unsustainable, and damaging as the forestry dogma that until recently brutalized wildernesses with the premise that trees are separate individuals hogging resources for themselves.

Complement this fragment of the wholly galvanizing All We Can Save with the visionary ecologist and conservationist William Vogt’s unheeded long-ago manifesto for course-correcting our ecological trajectory, then revisit “The Big Picture” — Ellen Bass’s immense and intimate poem of perspective and persistence, which also appears in the anthology.
I have to cast my lot with those
who age after age, perversely,

Here is what I love about the scientific method. Though culture seeps into science and sometimes holds its finger on the scale, it cannot stop the restless search for measurable truth. Un-American or not, the math has to work. When fifty years of wall-to-wall research into competition proved inconclusive, researchers went back to the field to find out what else was at play.

If humans are to help reverse global warming, we will need to step into the flow of the carbon cycle in new ways, stopping our excessive exhale of carbon dioxide and encouraging the winded ecosystems of the planet to take a good long inhale as they heal. It will mean learning to help the helpers, those microbes, plants, and animals that do the daily alchemy of turning carbon into life. This mutualistic role, this practice of reciprocity, will require a more nuanced understanding of how ecosystems actually work. The good news is that we’re finally developing a feeling for the organismic, after years of wandering in the every-plant-for-itself paradigm.

with no extraordinary power,
reconstitute the world.