Looking back on her own barren-branched seasons of the soul, she reflects:
Drawing on the analogy of tress — these most fertile metaphors for our humanity, in which we see ourselves and see quiet wisdom on how to live with ourselves, on how to live with each other, on the root of authenticity, on what it means to be an artist and what it means to be human — she writes:
The tree is waiting. It has everything ready. Its fallen leaves are mulching the forest floor, and its roots are drawing up the extra winter moisture, providing a firm anchor against seasonal storms. Its ripe cones and nuts are providing essential food in this scarce time for mice and squirrels, and its bark is hosting hibernating insects and providing a source of nourishment for hungry deer. It is far from dead. It is in fact the life and soul of the wood. It’s just getting on with it quietly. It will not burst into life in the spring. It will just put on a new coat and face the world again.

I have always cherished the bare beauty of winter trees, so fractal and pulmonary against the somber sky — so skeletal, yet so alive. Anyone willing to look closely — and why be alive at all if not to relish the ecstasy of noticing, that crowning glory of our consciousness? — is rewarded with the gasping recognition that the branches are already covered in tiny dormant buds encoding the Braille promise of spring. 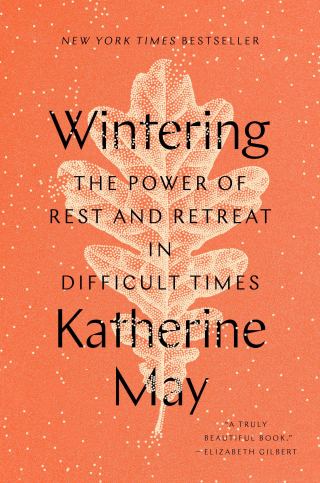 […]
The dropping of leaves by deciduous trees is called abscission. It occurs on the cusp between autumn and winter, as part of an arc of growth, maturity, and renewal. In spring and summer, leaf cells are full of chlorophyll, a bright green substance that absorbs sunlight, fueling the process that converts carbon dioxide and water into the starch and sugar that allow the tree to grow. But at the end of the summer, as the days grow shorter and the temperature falls, deciduous trees stop making food. In the absence of sunlight, it becomes too costly to maintain the machinery of growth. The chlorophyll begins to break down, revealing other colours that were always present in the leaf, but which were masked by the abundance of green pigment: oranges and yellows, derived from carotene and xanthophyll. Other chemical changes take place to create red anthocyanin pigments. The exact mix is different for each tree, sometimes producing bright yellows, oranges, and browns, and sometimes displaying as reds or purples.
Like happiness — which, as George Eliot well knew, is a skill we incrementally master as we grow older — sadness, May reminds us, is also a skill: There are self-punishing ways to be sad, and self-salving ways to be sad. In skillful wintering, we learn the difference between the two. Rilke, who wintered amply and wisely, knew that great sadnesses clarify us to ourselves — winters of the spirit come in various sizes and cycles, each meaningful, all cumulative in their soul-sculpting beneficence. May writes:

To get better at wintering, we need to address our very notion of time. We tend to imagine that our lives are linear, but they are in fact cyclical.

In one of the book’s wonderful portals into the world of science as a means of comprehending our elemental humanity, May considers the astonishing actuality of trees beyond the merely metaphorical:

That is what Katherine May explores in Wintering: The Power of Rest and Retreat in Difficult Times (public library) — a gorgeous book, a generous book, a layered book of uncommon sensitivity and substance, drawn from May’s own experience of living through a deep and disquieting winter of life. She writes:

The whole of Wintering — which explores the biological, psychological, neurochemical, and philosophical subtleties of our state of being in winter the season and winter the metaphor — is a splendid and soul-salving read. Complement it with Thoreau’s transcendentalist strategy for finding inner warmth in the cold of life, Annie Dillard on how winter awakens us to life, Adam Gopnik’s lyrical love letter to the white season, and D.H. Lawrence on trees, solitude, and how we root ourselves when our worlds collapse, then savor more of May’s writing and the personal story from which it springs in her wonderful On Being conversation with Krista Tippett.
This cyclical nature of the seasons of the spirit is counter to our dominant cultural narrative of self-improvement, with its ethos of linear progression toward states of ever-increasing flourishing. It is counter, too, to the world’s major spiritual traditions, with their ideas of salvation and enlightenment. (Any longtime practitioner of Zen or metta meditation, for instance, knows that while we do reach moments of so-called enlightenment — a gladsome dissolution of the self into an all-pervading lovingkindness — these moments are inevitably punctuated by visitations of our habitual tendencies toward egoic shortness of temper, the self-absorption we call melancholy, and other conditioned modes of unenlightened conduct.) And yet befriending this cyclical rhythm of our inner lives, May observes with life-tested clarity, is the key to wintering — to emerging from the coldest seasons of the soul not only undiminished but revitalized.

But while this is happening, a layer of cells is weakening between the stem and the branch: this is called the abscission zone. Gradually it severs the leaf from access to water, and the leaf dries and browns and in most cases falls off, either under its own weight or encouraged by wintery rains and winds. Within a few hours, the tree will have released substances to heal the scar the leaf has left, protecting itself from the evaporation of water, infection, or the invasion of parasites.
Here is another truth about wintering: you’ll find wisdom in your winter, and once it’s over, it’s your responsibility to pass it on. And in return, it’s our responsibility to listen to those who have wintered before us. It’s an exchange of gifts in which nobody loses out. This may involve the breaking of a lifelong habit, one passed down carefully through generations: that of looking at other people’s misfortunes and feeling certain that they brought them upon themselves in a way that you never would. This isn’t just an unkind attitude. It does us harm, because it keeps us from learning that disasters do indeed happen and how we can adapt when they do. It stops us from reaching out to those who are suffering. And when our own disaster comes, it forces us into a humiliated retreat, as we try to hunt down mistakes that we never made in the first place or wrongheaded attitudes that we never held. Either that, or we become certain that there must be someone out there we can blame. Watching winter and really listening to its messages, we learn that effect is often disproportionate to cause; that tiny mistakes can lead to huge disasters; that life is often bloody unfair, but it carries on happening with or without our consent. We learn to look more kindly on other people’s crises, because they are so often portents of our own future.

We are in the habit of imagining our lives to be linear, a long march from birth to death in which we mass our powers, only to surrender them again, all the while slowly losing our youthful beauty. This is a brutal untruth. Life meanders like a path through the woods. We have seasons when we flourish and seasons when the leaves fall from us, revealing our bare bones. Given time, they grow again.
When you start tuning in to winter, you realise that we live through a thousand winters in our lives — some big, some small… Some winters creep up on us so slowly that they have infiltrated every part of our lives before we truly feel them.

[Since childhood] we are taught to ignore sadness, to stuff it down into our satchels and pretend it isn’t there. As adults, we often have to learn to hear the clarity of its call. That is wintering. It is the active acceptance of sadness. It is the practice of allowing ourselves to feel it as a need. It is the courage to stare down the worst parts of our experience and to commit to healing them the best we can. Wintering is a moment of intuition, our true needs felt keenly as a knife.

Most trees produce their buds in high summer, and the autumn leaf fall reveals them, neat and expectant, protected from the cold by thick scales… from the sharp talons of the beech to the hooflike black buds of the ash. Many trees also display catkins in the winter, like the acid-green lambs’ tails of the hazel and the furry grey nubs of the willow. These employ the wind or insects to spread pollen, ready for the new year.

Rilke reverenced winter as the season for tending to the inner garden of the soul: “Suddenly to be healed again and aware that the very ground of my being — my mind and spirit — was given time and space in which to go on growing,” he wrote to a grief-stricken young woman who had reached out to him for consolation. “In the depths of winter, I finally learned that within me there lay an invincible summer,” Albert Camus wrote a generation later in his stunning essays about travel, which are really meditations on homecoming to our strength. Camus was soon to become the second-youngest Nobel laureate of all time and soon to die in a car crash with an unused train ticket to the same destination in his pocket. We are not invincible. But in how we garden the winters of the soul, we find the summer of our strength and the bloom of our fragile aliveness.