The Aygo X’s interior is cute too.
The Aygo X will go on sale in Europe at the beginning of 2022. It will likely carry a starting price equivalent to ,000, with fully loaded models topping out at around ,000. 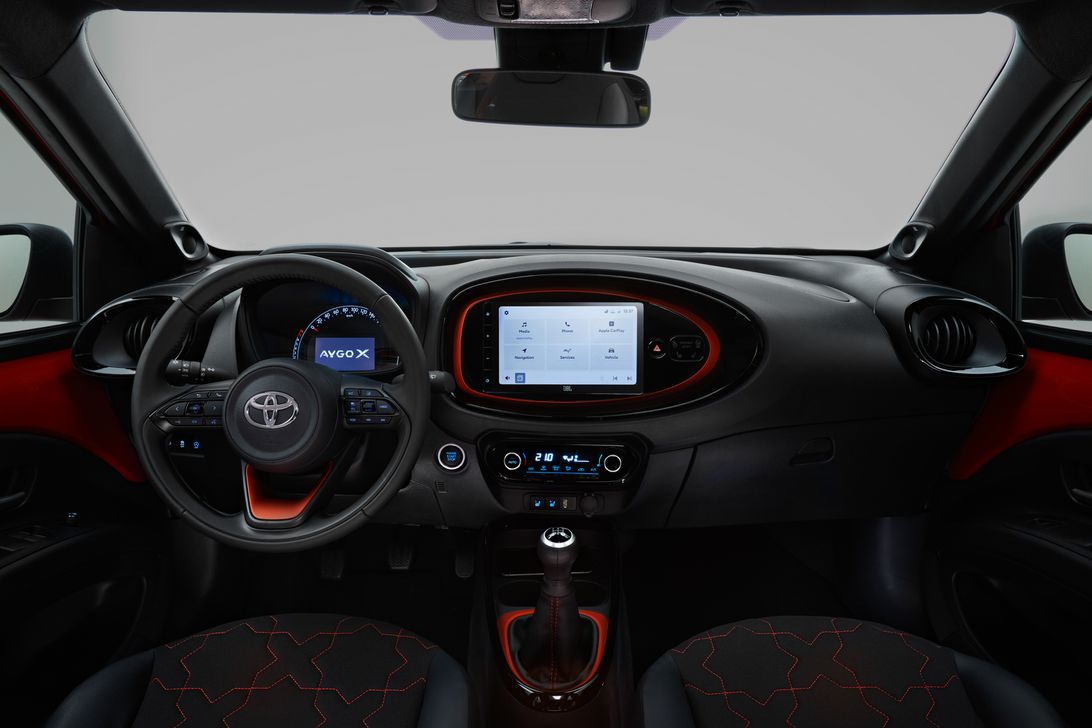 Earlier this year Toyota showed off the Aygo X Prologue concept, a high-riding hatchback that previewed an upcoming model that will be sold in Europe. Well, the Aygo X production car debuted Friday, and it’s honestly even cuter than the concept.
The Aygo X’s interior is just as cute as the outside. The door surrounds are exposed metal, a cost-saving measure that brings big pops of color inside, and color-matched accents are found on the the oval infotainment surround, shifter and steering wheel. I love the oval theme of the interior, especially the surrounds for the dashboard air vents. Every Aygo X has a 9-inch central touchscreen and a screen in the gauge cluster, and there are physical climate controls. The front seats get interesting stitching patterns and colored accents with an X motif, while the back seats are sparer. (Rear passengers don’t even get roll-down windows.)

When it comes to powertrains there’s only one option: a 72-horsepower naturally aspirated 1.0-liter 3-cylinder shared with the Yaris, paired with either a five-speed manual or a continuously variable transmission. Front-wheel drive is standard, with all-wheel drive not even on offer. Toyota says the Aygo X has one of the tightest turning circles in its class, and ride comfort and body roll have been improved. The Aygo X’s body in white is also the lightest of any A- or B-segment car, which Toyota says help provide “excellent” fuel economy. While a hybrid is unlikely, according to Autocar there’s a chance for a performance model in the future.
While the Aygo X Prologue was designed at Toyota’s European Design and Development facility in Nice, France, the production Aygo X was completed in the styling department at Toyota Motor Europe in Belgium. The Aygo X has an expressive front end with a prominent snout, large headlights and a big lower grille. Its rear overhang is absolutely miniscule and the C-pillar is raked forward, giving the Aygo X the impression of lunging forward, and the tall taillights flank a one-piece glass hatch. It’s available with wheels up to 18 inches in diameter, and the Aygo X has large plastic fender flares with a fun shape. Also, like the old Aygo, the Aygo X is offered with a rollback canvas roof.
Despite its diminutive size and entry-level status, Toyota packed the Aygo X with a ton of stuff. Available features include full LED lighting, wireless device charging, ambient interior lighting, over-the-air software updates, wireless Apple CarPlay and Android Auto, adaptive cruise control, pedestrian and cyclist detection, emergency steering assist and cloud-based navigation. Owners can download a smartphone app to monitor their Aygo X’s fuel level and other stats as well as track the vehicle.

The Limited edition gets orange accents. 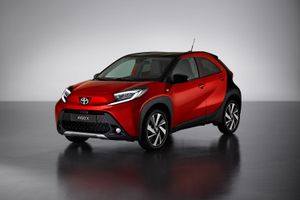