Complement On Immunity — a redemptive and salutary read in its entirety — with Virginia Woolf on illness as a portal to self-understanding and Bessel van der Kolk on the science of how our minds and our bodies converge in healing, then revisit Adrienne Rich on resisting capitalism through the arts of the possible.
Those who went on to use Wakefield’s inconclusive work to support the notion that vaccines cause autism are not guilty of ignorance or science denial so much as they are guilty of using weak science as it has always been used — to lend false credibility to an idea that we want to believe for other reasons.
For Biss — the daughter of a medical scientist and a poet — even her own biological inheritance as a universal donor with type O negative blood becomes a potent metaphor for the mechanism of vaccination, a lens through which to view the permeable membrane between the biological and social realities of immunity. With an eye to the blood banks that collect her donations to save other lives, she writes:

No one person has done more to undermine this vital mutuality of protection than Andrew Wakefield — the British gastroenterologist who, in the 1990s, infected the hive mind with his causal claims linking vaccines and autism. Preying on the understandable human impulse toward concretizing blame for amorphous and ambiguous problems, the theory went viral before multiple subsequent studies debunked his results, before it was exposed that Wakefield was paid for his research by a lawyer readying a lawsuit against a vaccine maker, before the General Medical Council of the United Kingdom concluded its investigation with the verdict that Wakefield had been “irresponsible and dishonest” in conducting and publishing his work.
The very expression herd immunity suggests that we are cattle, waiting, perhaps, to be sent to slaughter. And it invites an unfortunate association with the term herd mentality, a stampede toward stupidity. The herd, we assume, is foolish. Those of us who eschew the herd mentality tend to prefer a frontier mentality in which we imagine our bodies as isolated homesteads that we tend either well or badly. The health of the homestead next to ours does not affect us, this thinking suggests, so long as ours is well tended.
When Robert Hooke looked at a piece of cork through an early handcrafted leather-and-gold microscope in 1665, he named the strange irregular “pores” of its honeycomb-like tissue structure cells, after the small adjacent spaces in which monks spend their voluntary solitary confinement. It would take another two centuries for scientists to discover that cells are the basic biological units of life, that they are in constant osmotic communication with one another, and that they replicate themselves to become new cells, each a whispered word from the language in which life talks to the future.

Immunity is a public space. And it can be occupied by those who choose not to carry immunity. For some… a refusal to vaccinate falls under a broader resistance to capitalism. But refusing immunity as a form of civil disobedience bears an unsettling resemblance to the very structure the Occupy movement seeks to disrupt — a privileged 1 percent are sheltered from risk while they draw resources from the other 99 percent.

If we were to exchange the metaphor of the herd for a hive, perhaps the concept of shared immunity might be more appealing. Honeybees are matriarchal, environmental do-gooders who also happen to be entirely interdependent. The health of any individual bee, as we know from the recent epidemic of colony collapse, depends on the health of the hive.

Biss quotes a succinct summation by her father, a doctor:

Despite the scientific and ethical denunciation of Wakefield’s study, its ideological meme had already spread beyond retrieval. (Richard Dawkins coined the word meme in 1976 by borrowing from biology — a word that came alive anew a quarter century later in the context of “viral” content on the internet, which has its own roots in epidemiology.) A quarter century later, echoes of Wakefield’s disproven falsehoods bellow with formidable vocality. That group of voices is often referred to as the anti-vaccination movement, but I find the term movement extremely ill-suited — such groupthink is not in movement but static, frozen in time and frozen with fear, petrified in the cultural amber of a time before the Age of Reason and lashed about by the same errors of magical thinking, willful blindness, and confusion of causation and correlation that made our medieval ancestors take comets for indisputable omens of future events and left-handedness for indisputable evidence of possession by the Devil.

In a lovely antidote to the tragic human tendency toward cynicism — that touchingly misguided and ineffective effort at self-protection, that particularly virulent strain of cowardice to which our culture has grown increasingly hospitable as it has grown increasingly impatient with the slow and vulnerable work of nuance — Biss adds:

Herd immunity, an observable phenomenon, now seems implausible only if we think of our bodies as inherently disconnected from other bodies. Which, of course, we do.
Months after Rachel Carson’s Silent Spring awakened humanity to the delicate interdependence of nature, Dr. King awakened humanity to our delicate dependence on each other. “We are caught in an inescapable network of mutuality [and] whatever affects one directly, affects all indirectly,” he wrote from his cell at the Birmingham City Jail.
Writing shortly after the birth of the Occupy movement — the self-described “99%” launching “an ongoing global protest of capitalism” — she considers a friend’s half-joke, half-koan about vaccination as a matter of “occupy immune system,” and reflects on the basic moral syllogism of anti-vaccination as a political stance claiming to protest the capitalist forces behind modern medicine:

If we imagine the action of a vaccine not just in terms of how it affects a single body, but also in terms of how it affects the collective body of a community, it is fair to think of vaccination as a kind of banking of immunity. Contributions to this bank are donations to those who cannot or will not be protected by their own immunity. This is the principle of herd immunity, and it is through herd immunity that mass vaccination becomes far more effective than individual vaccination.

That delicate interdependence of life and lives, with its tangled roots in biology and cultural history, is what Eula Biss explores in On Immunity: An Inoculation (public library) — a book of penetrating and poetic insight, drawn with that rare scholarship capable of correcting the warped cultural hindsight we call history; a book of staggering foresight, conceived in the wake of the H1N1 flu pandemic, yet speaking with astonishing prescience to the complex epidemiological realities and social dynamics of the COVID-19 pandemic unfolding more than five years after its publication.

That so many of us find it entirely plausible that a vast network of researchers and health officials and doctors worldwide would willfully harm children for money is evidence of what capitalism is really taking from us. Capitalism has already impoverished the working people who generate wealth for others. And capitalism has already impoverished us culturally, robbing unmarketable art of its value. But when we begin to see the pressures of capitalism as innate laws of human motivation, when we begin to believe that everyone is owned, then we are truly impoverished.
We are justified in feeling threatened by the unlimited expansion of industry, and we are justified in fearing that our interests are secondary to corporate interests. But refusal of vaccination undermines a system that is not actually typical of capitalism. It is a system in which both the burdens and the benefits are shared across the entire population. Vaccination allows us to use the products of capitalism for purposes that are counter to the pressures of capital.

Biss is more generous in her own assessment of anti-vaccination: 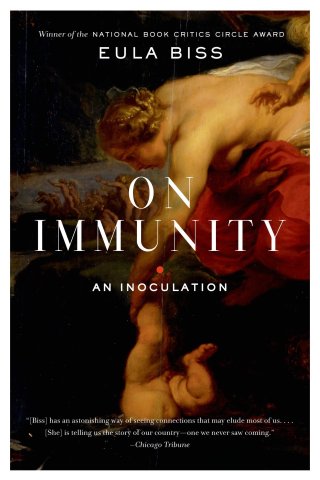 The unvaccinated person is protected by the bodies around her, bodies through which disease is not circulating. But a vaccinated person surrounded by bodies that host disease is left vulnerable to vaccine failure or fading immunity. We are protected not so much by our own skin, but by what is beyond it. The boundaries between our bodies begin to dissolve here. Donations of blood and organs move between us, exiting one body and entering another, and so too with immunity, which is a common trust as much as it is a private account. Those of us who draw on collective immunity owe our health to our neighbors.
With an eye to the origin of herd immunity theory — a theory developed in the 1840s by a doctor treating smallpox, which has taken manyfold more human lives than any other infectious disease in the history of our species and which has since been eradicated — Biss proposes an alternative, both more poetic and more precise, to the imperfect term that so perfectly describes the biosocial reality:
Biological and social, our interdependence is a defining feature not only of our civilization, not only of our species and all living species, but of life itself — life the physiological process and life the psychosocial phenomenon. “Every atom belonging to me as good belongs to you,” Walt Whitman exulted in the golden age of chemistry — the new science he saw as “the elevating, beautiful, study… which involves the essences of creation.” Meanwhile, the development of cell theory was revolutionizing biology, making of this philosophical field as old as Aristotle an even newer science that illuminated the essence of life. Cells became to biology what atoms were to chemistry. Biology ushered in the revelation that every cell belonging to me as good — as healthy, as vital, as fit for replication — belongs to you.

Vaccination works by enlisting a majority in the protection of a minority.

And yet inside the unfortunate linguistic container, an unfaltering biological reality resides: On large enough a scale, even a fairy ineffective vaccine that fails to produce immunity in some individuals will slow down the spread of infection in the community; as the virus fails to replicate itself in more and more new hosts, the vaccine will eventually halt it altogether. In consequence, even such a mediocre vaccine will protect all members of the community, even those for whom inoculation has not worked as intended on the individual level. This is why it is more dangerous to be the vaccinated animal amid a largely unvaccinated herd than the other way around. Biss writes:

It is a rather unfortunate term for an unassailable scientific principle — we humans, especially in this culture of rugged individualism nursed on the Emersonian ideal of self-reliance, bristle at thinking of ourselves as members of a herd. In our long history of thinking with animals, herd animals have been the butt of our derogatory metaphors for mindless conformity.