Are any of her three hearts breaking
for us
and our impossible blues?
These were the thoughts swimming through my point of mind while composing the poem I contributed to the 40th anniversary issue of the oasis of wonder that is Orion Magazine — a poem distilling in its handful of stanzas what The Universe in Verse has been inviting and celebrating all these years: the poetry of perspective.

shades of blue we cannot conceive. 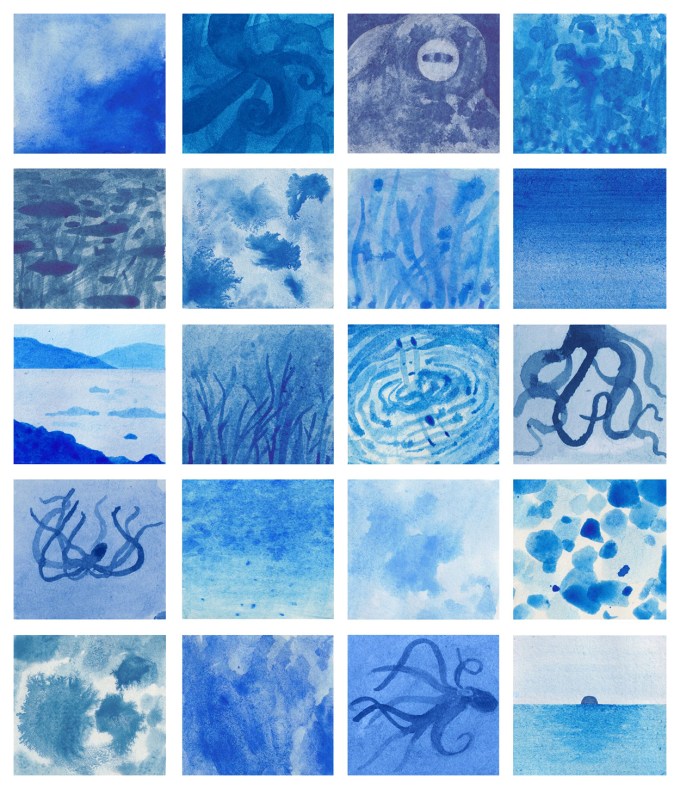 THE AGE OF THE POSSIBLE
by Maria Popova
to tell stories about
what is real and
what is possible,
and what it means to be.
And meanwhile,
up here,
we swim amid particles
we cannot perceive
folded into dimensions
we cannot imagine
To live wonder-smitten with reality is the gladdest way to live. But with our creaturely capacity for wonder comes a responsibility to it — the recognition that reality is not a singularity but a plane. Each time we presume to have seen the whole, the plane tilts ever so slightly to reveal new vistas of truth and new horizons of mystery, staggering us with the sudden sense that we had been looking at only a fragment, framed by our parochial point of view. The history of our species is the history of learning and forgetting and relearning this elemental truth.
can see
the octopus —
A blink of time ago
we thought the octopus
impossible,
we thought this blue world
lifeless
below three hundred fathoms
until in 1898 —
an epoch after Bach
scribbled in the margin
of a composition
“Everything that is possible is real” —
we plunged our prosthetic eye
deep into the blue
and found a universe of life.
Accompanying the poem in the magazine is a breathtaking watercolor interpretation by artist and immigrant rights activist TK, born in Vietnam and based in Philadelphia — my own first home in America as a young immigrant — who somehow summons, without ever having known it, the working title of the poem: “Octopus Blues.”
Call it god
if you must
lean on the homely
to fathom the holiness
of the fathomless whole.
There,
at the bottom of being,
where the water that makes
this planet a world
is the color of spacetime
with her body-shaped mind
and her eight-arm embrace
of alien realities,
with her colorblind vision
sightful of polarized light
and her perpetually awestruck
lidless eye —