More than a century later, with the Atlantic Coast oyster beds overfished to the brink of ruin and entire marine ecosystems devastated by pollution, Mark Kurlansky picks up the admonition and hones it on an edge of optimism in his fascinating book The Big Oyster: History on the Half Shell (public library). Lamenting that “the only thing New Yorkers ignore more than nature is history” — a statement as true if we substituted “Americans” (as a national identity) or “modern humans” (as a civilizational identity) for “New Yorkers” — he writes:
I suppose that when the sapid and slippery morsel — which is gone like a flash of gustatory summer lightning — glides along the palate, few people imagine that they are swallowing a piece of machinery (and going machinery too) greatly more complicated than a watch.

When puzzling about stratifications, etc., I feel inclined to cry “a fig for your big oysters, and your bigger megatheriums” [extinct prehistoric giant sloths].

By the final decade of the century, early voices of dissent and ecological wakefulness were being raised. In the 1891 book The Oyster: A Popular Summary of a Scientific Study, the Johns Hopkins University zoologist William K. Brooks cautioned:

A fresh oyster from a clean sea fills the palate with the taste of all the excitement and beauty — the essence — of the ocean. If the water is not pure, that, too, can be tasted in the oyster. So if someday New Yorkers can once again wander into their estuary, pluck a bivalve, and taste the estuary of the Hudson in all the “freshness and sweetness” that was once there, the cataclysm humans have unleashed on New York will have been at last undone. 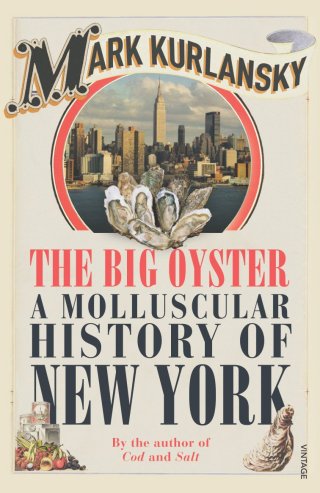 The fact, which for many years we strove to hide even from ourselves, [is] that our indifference and lack of foresight, and our blind trust in our natural advantages, have brought this grand inheritance to the verge of ruin. Unfortunately this is now so clear that it can no longer be hidden from sight nor explained away, and every one knows that, proud as our citizens once were of our birthright in our oyster-beds, we will be unable to give to our children any remnant of our patrimony unless the whole oyster industry is reformed without delay. We have wasted our inheritance by improvidence and mismanagement and blind confidence.

New York is a city that does not plan; it creates situations and then deals with them. Most of its history is one of greedily grabbing beautiful things, destroying them, being outraged about the conditions, tearing them down, then building something else even further from nature’s intention in their place.
From the dawning scientific knowledge of the oyster, a different kind of enjoyment arose — a kind consonant with Richard Feynman’s Ode to a Flower. Here was a creature at once rugged and tender, like life itself. Here was an emissary of a primordial Earth that carries the ancestral root of consciousness — that crucible of our capacity for enjoyment — in its tiny brain and nervous system fringed with a dark mantle of myriad nerve endings ceaselessly scanning the environment for threat and dispatching signals to the brain to slam the shell shut.

“Obviously, if you don’t love life, you can’t enjoy an oyster,” Eleanor Clark wrote in the book that won her the National Book Award, published exactly 100 years after On the Origin of Species. For Darwin, these strange and quietly wondrous creatures furnished a different kind of enjoyment. He had come under their spell as a college student, accompanying two of his mentors as they waded into tidal pools to collect oyster specimens. By twenty-five, having fused the enchantment of oysters with his growing passion for the deep time of geology, he was exulting to a friend:

Out of such simplicity arose cognition, consciousness, the emotional machinery of love. All these billions of years of evolution, and we still the same impulse animates our days and our songs — what to seal in, what to keep out, what to trust.
But the history of our species is the history of convenient delusions — those willful blindnesses that allow us to live with ourselves: By the end of the nineteenth century, oysters were being sold by the bushel at three for a penny and eaten by the dozen at fine restaurants and street foodcarts alike. An entire industry of shuckers employed a whole new labor force. There were oyster-eating championships and champions who could open and eat 100 oysters in three minutes. Travelers remarked that in New York, “oysters in every size and variety of flavor are as cheap as oranges are at Havana.”

As natural history, evolution, and anatomy began revealing the unsuspected complexity of this organism long perceived as incredibly simple — and, in consequence, treated more like a lifeless rock than like a creature — to “enjoy” an oyster in the culinary sense became a less carefree endeavor. The biologist and anatomist T.H. Huxley — Darwin’s greatest champion against the first tidal wave of dogmatic attacks on evolutionary theory — captured the dismantling of the convenient delusion:

Writing nearly a decade before the founding of the Billion Oyster Project — one of the most inspired and inspiring restoration, conservation, and ecological education endeavors of our time — Kurlansky regards the extraordinary resilience of the oyster against a century of overfishing and pollution to envision a future in which the restoration of the oyster is both a function of and a catalyst for the restoration of our humbler and more harmonious relationship with the natural world:

For a lovely real-life helping of actionable optimism, join me in supporting the noble work of the Billion Oyster Project with a donation, then revisit the great marine biologist and epoch-making voice of ecological conscience Rachel Carson on science as a portal to our spiritual bond with nature and how the ocean illuminates the meaning of life.