For more Star Wars movies and show release dates, take a gander at the calendar below.
As Obi-Wan Kenobi kicks off early on Disney Plus, we have a couple more dates to look forward to thanks to Star Wars Celebration Anaheim.
Season 3 of The Mandalorian also got a release window: February 2023. There’s no exact day to put in the calendar just yet.
The show revealed the release date for Andor, a 12-episode series starring Diego Luna reprising his role from 2016’s Rogue One. The first episode is slated to hit Disney Plus Aug. 31.
The Celebration also unveiled a brand-new show, a coming-of-age story starring Jude Law. Star Wars: Skeleton Crew doesn’t have a release window yet, but we do know it’s inspired by classic Stephen Spielberg movies. 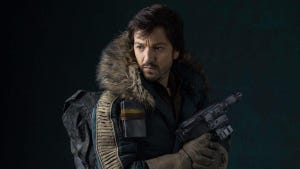