This story is part of War in Ukraine, CNET’s coverage of events there and of the wider effects on the world. A report Friday from The Washington Post details the expenditures, citing documents from the United States Agency for International Development. According to the Post, the US government and taxpayers have spent around million contributing to the effort. That money went toward purchasing close to 1,500 Starlink terminals at ,500 each, plus 0,000 for transportation costs to Ukraine, the newspaper reported.
In late March, SpaceX president Gwynne Shotwell told CNBC, “I don’t think the US has given us any money to give terminals to the Ukraine.” She also said that most of the funding came from private sources, and acknowledged some help from France and possibly Poland, according to CNBC.
Shortly after Russia invaded Ukraine in late February, Musk said that SpaceX would donate Starlink terminals to Ukraine so that citizens there could use the satellite internet service amid disruptions to other avenues of accessing the internet. He also urged people using the service to be careful to avoid detection by Russian forces.
Altogether, somewhat more than 5,000 Starlink terminals were tapped to be sent to Ukraine, according to the Post story.
A press release from USAID this week said that the agency “has delivered 5,000 Starlink terminals to the government of Ukraine through a public-private partnership with the American aerospace manufacturer, SpaceX.” USAID told CNET in an emailed statement that it “directly procured 1,333 terminals for the government of Ukraine and provided on-the-ground logistical support to facilitate their safe delivery.”
“While you try to colonize Mars — Russia try to occupy Ukraine! While your rockets successfully land from space — Russian rockets attack Ukrainian civil people! We ask you to provide Ukraine with Starlink stations and to address sane Russians to stand,” Fedorov tweeted at the time.
Unlock the biggest mysteries of our planet and beyond with the CNET Science newsletter. Delivered Mondays.
The Post additionally reported that SpaceX has donated 3,670 terminals, along with the internet service itself. Its story didn’t say how much that may have cost SpaceX out of pocket.
The delivery of the Starlink terminals was made possible by “a range of stakeholders,” according to a USAID spokesperson, adding that the combined contributions were valued at over million and facilitated a range of things including procurement, international flights, on-the-ground transportation and the satellite internet service.
SpaceX didn’t respond to CNET’s request for comment.
The SpaceX Starlink terminals were first sent in late February in response to a request from Mykhailo Fedorov, the vice prime minister of Ukraine and minister of digital transformation.
Starlink has launched around 2,000 satellites into orbit since 2018 to provide an internet system that’s accessible globally.

SpaceX’s contribution of Starlink internet terminals and service to Ukraine may be subsidized in part by the US government, according to a report, even though SpaceX, Elon Musk’s rocket company, has suggested it hasn’t received any money from the government. 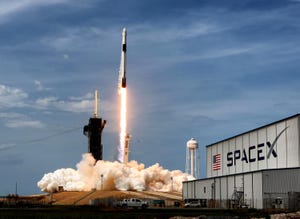