Again, there is the jurisdictional question here: if the website was not part of Professor Lawford-Smith’s work, to what extent is her university allowed to take it into account in its decisions regarding her? (If you’re familiar with how this issue has been dealt with in Australian instutions of higher education, please let us know about it in the comments.)
Near the end of the appendix to the letter, the authors cite student accounts of how Professor Lawford-Smith refers to trans women and trans men in class, calling it “deeply transphobic,” arguing that it conflicts with the inclusive aims of the university and may “constitute gender identity discrimination (‘misgendering’) under the Equal Opportunity Act 2010.” If true, as this is clearly a workplace matter, it seems the university would be within its rights to ask her to stop referring to these groups in disrespectful ways (again the racial analog is instructive; I’ll leave it to you consider it), to investigate any student complaints about this or related issues, or to reconsider her specific teaching responsibilities.
[Lili Elbe – Poplars along Hobro Fjord]
The last thing the authors do is question whether Professor Lawford-Smith should be allowed to teach her views in light of the fact that both Twitter and Medium suspended her accounts because they found her in violation of their “hateful conduct” and “hate speech” policies. I’m sorry, but this is as foolish as “No Conflict, They Said” is transphobic. Are we to take Twitter and Medium as exemplars to follow? Are we to take the decisions of these corporations as precedents for how academia should operate? Should we think their judgments have any relevant evidential value at all? No, no, and no. 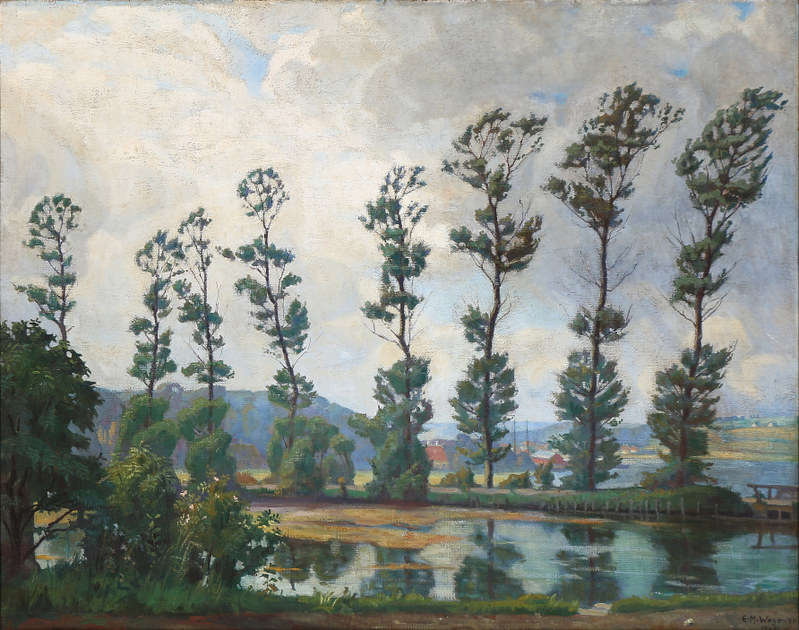 Even if the staff member in question does not intend to use the “stories” they are collecting and publishing for their own research, this amounts to collecting and publishing a publicly available dataset that others may use for the purpose of research. A key responsibility of research integrity is to “consider the dual use of their research”… We are concerned about the lack of clarity around whether this website has been established for use in academic research, or whether it may be perceived as such by members of the public.

For example, about the website, they write:
On Thursday, according to The Sydney Morning Herald, a group of academics and students from the University of Melbourne and other institutions published an open letter about Professor Lawford-Smith’s site to the university’s Vice Chancellor, the Dean of Arts, its Office of Research Ethics and Integrity, and its Inclusion and Diversity Steering Committee. (At the time of this post, it had over 600 signatures.) In the letter, the authors express “concern and dismay” over her website, which they say contains “materials that encourage transphobia,” speculate as to whether views she expresses and language she uses in her feminist philosophy course are transphobic, and argue that she may be in violation of university policy.
The authors of the open letter also object that, apparently, no research ethics “approval” for the website had been sought by Professor Lawford-Smith or granted by the university. Anticipating an objection, they write:
Not being an expert on the Australian context, I’m not in a position to offer a specific recommendation. But I would suggest that we need to be honest about the various aspects of these kinds of cases and the complications that arise from them. Concerns about academic freedom, freedom of speech, transphobia (and racism, sexism, homophobia, etc.), employer control of employees’ personal lives, student welfare, pedagogical effectiveness, professionalism, law, diversity, and other matters grow together into a dense and thorny hedge. If we’re to get through it, we’ll need to be careful.
So what should we do?

We suggest that the content created and promoted by the staff member represent action that contravenes the Appropriate Workplace Behaviour Policy… Section 7 of the Policy regards “Promoting a diverse and inclusive worlplace” and specifies at 7.3 that: “An individual must not directly or indirectly, or incite others to engage in any of the following behaviours, in any circumstance which may have an impact on the workplace” which includes “(i) vilify an individual or group of individuals.”
While it’s true that Professor Lawford-Smith’s website encourages the vilification of trans people, it does not appear that the website was created as part of her work for the university, so it is unclear how it is subject to a policy about appropriate workplace behavior. Further, the University of Melbourne’s “Academic Freedom of Expression” policy states that “scholars are entitled to express their ideas and opinions even when doing so may cause offence. These principles apply to all activities in which scholars express their views both inside and outside the University.” At the same time, Australia lacks an explicit right to free speech, and the courts have supported public institutions in their firing of employees for things like posting homophobic views on social media (for example). It appears, then, that various relevant institutions, policies, and laws do not speak univocally on this matter.
Commenters on this post must use their real names (first and last) when commenting.
Comments are moderated and may take some time to appear.
Please see the Comments Policy.
Also, the claim that the website is research, such that it would need ethics approval, seems to be a stretch. The authors claim that producing something “that others may use for the purpose of research” should itself be subject to research regulations. Surely not, though: simply living one’s life and posting a lot about it on Twitter is “publishing a publicly available dataset that others may use for the purpose of research,” but we don’t (and shouldn’t) take that as a reason to subject one’s everyday personal life to research regulations.
“No Conflict They Said” was set up by Professor Lawford-Smith as a site for cis women to highlight “conflicts of interest” between them and trans women. In its few days of existence (it was created this past Tuesday), it has turned into a gallery of transphobia, much in the way that a website that called for white people to anonymously share complaints about black people would turn into a haven for racism. In both cases, the prejudice is in the blueprints—even reasonable complaints about instances of unfairness, or accurate and unquestionably horrifying stories of sexual assault, cannot neutralize the transphobia of the site, any more than analogous racial examples would validate the racist one.
Holly Lawford-Smith, associate professor of philosophy at the University of Melbourne, has created a website that solicits and publishes anonymous complaints about the presence of trans women in typically women-only spaces.
The site, “No Conflict They Said,” contains anti-trans commentary, misgendering, complaints about gender-neutral language and being asked one’s preferred pronouns, conspiratorial worries about “transing”, expressions of disgust at the expectation to be more inclusive towards trans women, and outrage at institutions which have become trans-inclusive. There are also stories of sexual assault and abusive behavior and speech.