A fellow looper, Nietzsche walked the same routes one hour every morning and three every afternoon, half-blind, dreaming of having a small house of his own someplace solitary and walkable:
A virtuoso of metaphor, he adds:
Even in his exile, even in the agony of his social ostracism and the agony between his temples, Nietzsche never lost sight of how provisional and relative privilege is, how lucky he was to have this lifeline:
In his early thirties, intellectually alienated by an academic world unripe for his ideas, romantically deflated after one too many hasty marriage proposals spurned, Nietzsche was leveled by spells of nausea and increasingly debilitating migraines that left him bedridden in a darkened chamber for days at a time, unable to read or write, his eyes daggers of pain. He found only one remedy — long solitary walks.

In his final book, Nietzsche bequeathed his life-tested advice on the life of the mind and the life of the spirit:
I am far from alone in the reliance on ambulatory solitude as an anchor of creative practice — there is Rebecca Solnit’s lovely definition of walking as “a state in which the mind, the body, and the world are aligned,” and Thomas Bernhard’s insight that “there is nothing more revealing than to see a thinking person walking, just as there is nothing more revealing than to see a walking person thinking,” and Wind in the Willows author Kenneth Grahame’s insistence that solitary walks “set the mind jogging… make it garrulous, exalted, a little mad maybe — certainly creative and suprasensitive,” and of course Thoreau, always Thoreau, who believed that “every walk is a sort of crusade” for returning to our senses.

But hardly any thinker has been shaped and saved by walking more powerfully than Friedrich Nietzsche (October 15, 1844–August 25, 1900).

We do not belong to those who have ideas only among books, when stimulated by books. It is our habit to think outdoors — walking, leaping, climbing, dancing, preferably on lonely mountains or near the sea where even the trails become thoughtful.

Almost everything I write, I “write” in the notebook of the mind, with the foot in motion — what happens at the keyboard upon returning from the long daily walks that sustain me is mostly the work of transcription.

That summer, he composed The Wanderer and His Shadow — the third and final installment in his aphoristic roadmap to becoming oneself — almost entirely on foot, filling six small notebooks with penciled-in peripatetic thoughts. In it, he considered “the wanderings of the reason and the imagination” by which one becomes a truly free spirit — wanderings that, for him, took place with the mind afoot across mountains and meadows. Long before modern science shed light on the role of the hippocampus in how landscapes shape us, Nietzsche became himself in his wanderings.

Sit as little as possible; do not believe any idea that was not born in the open air and of free movement — in which the muscles do not also revel… Sitting still… is the real sin against the Holy Ghost.

By his mid-thirties, he was doing “ten hours a day of hermit’s walking.” This was his personal Golden Age, his decade of walking and writing the books that would leave his immortal trail: Zarathustra, The Dawn, Beyond Good and Evil, The Joyous Science, On the Genealogy of Morality. In one of them, he wrote:

Our first questions about the value of a book, of a human being, or a musical composition are: Can they walk? Even more, can they dance?

When one has walked a long way to reach the turning in the path that discloses an anticipated view, and that view appears, there is always a vibration of the landscape. It is repeated in the walker’s body. The harmony of the two presences, like two strings in tune, each feeding off the vibration of the other, is like an endless relaunch. Eternal Recurrence is the unfolding in a continuous circle of the repetition of those two affirmations, the circular transformation of the vibration of the presences. The walker’s immobility facing that of the landscape… it is the very intensity of that co-presence that gives birth to an indefinite circularity of exchanges: I have always been here, tomorrow, contemplating this landscape.

I am walking a lot, through the forest, and having tremendous conversations with myself. 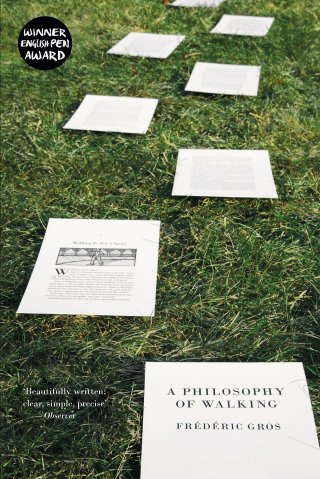 In the summer of his thirty-third year, having exiled himself to a succession of temporary lodgings across Europe, he wrote from amid the pines of the Black Forest:

What my foot demands in the first place from music is that ecstasy which lies in good walking.

I would walk for six or eight hours a day, composing thoughts that I would later jot down on paper.

Good books, Nietzsche believed, are spacious books — books that breathe the same open air in which the ideas set down in them forged; bad books exude the cramped smallness in which they were written — works of “closet air, closet ceilings, closet narrowness.” We write, he believed, “only with our feet.” Having declaimed that “without music life would be a mistake,” he held his most cherished art to the same standard:

And so it comes as no surprise that he made walking a centerpiece of his philosophy, manifested in his most fertile thought experiment — the Eternal Return, or Eternal Recurrence. In A Philosophy of Walking (public library), where Nietzsche’s relationship with the mind in motion figures prominently, Frédéric Gros writes:

During my long walks I had wept too much, and not sentimental tears but tears of happiness, singing and staggering, taken over by a new gaze that marks my privilege over the men of today.

Complement with the great Scottish mountaineer and poet Nan Shepherd on the moving body as an instrument of the mind and Lauren Elkin’s splendid contemporary manifesto for walking as creative empowerment, then revisit Nietzsche on love and perseverance, how to find yourself, why a fulfilling life requires embracing rather than running from difficulty, depression and the rehabilitation of hope, and the power of music, the power of language.