Specifically, Michelin has been working closely with General Motors on an airless tire that could debut with the next generation of Chevrolet Bolt. The advantage of airless tires on an EV is that they’re always at the correct pressure to maximize their efficiency and reduce their rolling resistance. Less rolling resistance means more range without adding more battery and, therefore, more weight. Everybody wins.
The next-gen Bolt is looking increasingly likely to get airless tires.

See the latest cars and automotive trends from supercars to SUVs. Delivered Tuesdays and Thursdays.

While GM hasn’t explicitly confirmed that it’s doing another generation of Bolt, its forthcoming barrage of Ultium-powered electric vehicles will likely contain something that’s approximately Bolt-shaped and relatively Bolt-priced, and it’s this now-hypothetical-affordable-EV that’d get the airless Michelins.
In place of air, the Michelin concept uses flexible ribs to provide structure for the tire, and those ribs are left exposed and open to the atmosphere. A version of this technology where the wheel is integrated into the tire is called the Tweel (tire-wheel, tweel). Whether this Bolt-like vehicle gets a Tweel or a version that has a separate wheel with the airless tire wrapped around it (which Michelin calls the Uptis) remains to be seen, though we expect it’ll be the latter.

Now playing: Watch this: The 2022 Chevy Bolt EUV and Bolt EV: The start of something… 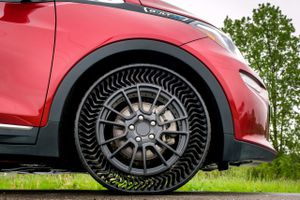