The remedy, of course, is not to bend the reality of an impartial universe to our will. The remedy is to calibrate our expectations — a remedy that might feel far too pragmatic to be within reach in the heat of the collision-moment, but also one with profound poetic undertones once put into practice.
What is true of the poetics of our own body-soul is as true of the poetics of relationship, that beautiful and terrifying interchange between separate body-souls. Little syphons the joy of life more surely than the wasted energy of indignation at how others have failed to behave in accordance with what we expected of them.
Always define or describe to yourself every impression that occurs to your mind, so that you can clearly see what the thing is like in its entirety, stripped to its essence, and tell yourself its proper name and the names of the elements of which it consists and into which it will be resolved. Nothing is more conducive to objectivity than the ability methodically and honestly to test everything that you come across in life, and always to look at things in such a way that you consider what kind of part each of them plays in what kind of universe, and what value it has for the universe as a whole.
You’ll find that none of the people who make you lose your temper has done anything that might affect your mind for the worse; and outside of the mind there’s nothing that is truly detrimental or harmful for you… After all, you even had the resources, in the form of your ability to think rationally, to appreciate that he was likely to commit that fault, yet your forgot it and are now surprised that he did exactly that.

If you carry out every present task by following right reason assiduously, resolutely, and with kindness; if rather than getting distracted by irrelevancies, you keep your guardian spirit unspoiled and steady, as though you had to surrender it at any moment; if you engage with the task not with expectations or evasions, but satisfied if your current performance is in accord with nature and if what you say and express is spoken with true Roman honesty, you’ll be living the good life. And there’s no one who can stop you doing so!
Walt Whitman understood this when, felled by a paralytic stroke, he considered what makes life worth living and instructed himself: “Tone your wants and tastes low down enough, and make much of negatives, and of mere daylight and the skies.” He spared himself the additional self-inflicted suffering of outrage at how his body failed him — perhaps because, having proclaimed himself the poet of the Body and the poet of the Soul, he understood the two to be one. He squandered no emotional energy on the expectation that his suddenly disabled body perform a counterpossible feat against reality to let him enjoy his beloved tree workouts and daily excursions to the river. He simply edited his expectations to accord with his new reality and sought to find his joy there, within these new parameters of being. 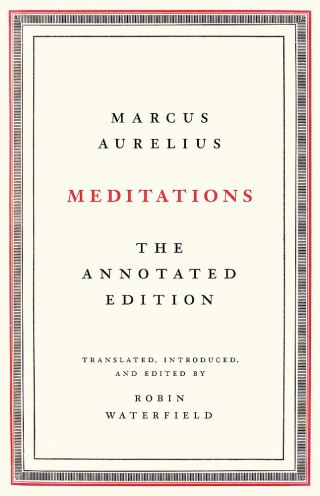 The things of the world cannot affect the soul; they lie inert outside it, and only internal beliefs disturb it.

Clarity of vision, he reminds us, is the basis of rightful action, and while our own rightful action may not be a guarantee of our contentment — or what the Romans shorthanded as “the good life” — it is our only assurance toward it:

Complement with Seneca, another apostle of Stoicism, on the antidote to anxiety and Marcus Aurelius himself, in a different translation of his Meditations, on the key to living with presence, the most potent motivation for work, and how to begin each day, then revisit Ursula K. Le Guin’s magnificent more-than-translation of another ancient classic from the wisdom tradition of a different civilization, the Tao Te Ching. (One thing that has always troubled me about modern translations of ancient classics is that they present an opportunity to calibrate the inclusiveness of these teachings to our present hard-earned sphere of dignity without changing their message — an opportunity very few translators take, for it requires a formidably delicate balance between the rigors of scholarship and the responsibilities of a social conscience. Count on Le Guin, whose meditation on being “a man” remains the finest thing I have ever read on the history of gender in language, to leap at that opportunity and make something soaring.)

Whenever a person’s lack of shame offends you, you should immediately ask yourself, “So is it possible for there to be no shameless people in the world?” It isn’t, and you should therefore stop demanding the impossible. He’s just one of those shameless people who must necessarily exist in the world. You should keep the same thought readily available for when you’re faced with devious and untrustworthy people, and people who are flawed in any way. As soon as you remind yourself that it’s impossible for such people not to exist, you’ll be kinder to each and every one of them. It’s also helpful immediately to consider what virtue nature has granted us human beings to deal with any given offense — gentleness, for instance, to counter discourteous people…

Millennia before William James lit the dawn of modern psychology with the radical assertion that our experience is what we “agree to attend to,” millennia before neuroscience came to locate the seat of consciousness in the qualia of subjective experience, Marcus Aurelius serves that classic Stoic cocktail of simply worded obvious truths that are difficult truths to live up to, earned by a thousand complexities of conduct to be practiced daily:

Epochs before the birth of probability theory, Marcus Aurelius begins with a probabilistic-statistical consolation:

First, don’t be upset. Nothing happens that isn’t in accord with universal nature, and before long you won’t exist at all, just like [your heroes]… Second, fix your gaze on the matter at hand and see it for what it is, and then, keeping in your mind your obligation to be a good man and the demands of your humanity, go right ahead and do it, in the way that seems to you to be most just. But do it with kindness and modesty, and without dissembling.

Reaching across space and time, across cultures and civilizations, Marcus Aurelius prescribes the antidote:
This is but one manifestation of the central preoccupation of the Meditations — the lifelong project of learning to see clearly as the greatest self-defense against mental anguish. So much of our disappointment and rage, after all, stem from the clash between our misperceptions of things and the reality of things — they are the pain of disillusionment, inflamed in those moments when the veil of illusion is lifted or violently pierced to let us, finally, see reality.

Two millennia before the outrage culture of the Internet, the lovesick queer teenager turned Roman emperor and Stoic philosopher Marcus Aurelius (April 26, 121–March 17, 180) addressed this curious self-mauling tendency of the human mind with his characteristic precision of insight and unsentimental problem-solving in the notebooks that became his Meditations (public library) — a timeless book, newly translated and annotated by the British classics scholar Robin Waterfield, which Marcus Aurelius wrote largely for and to himself, like Tolstoy wrote his Calendar of Wisdom and Bruce Lee calibrated his core values, yet a book that went on to stake the pillars of the philosophical system of Stoicism, equipping countless generations with tools for navigating the elemental existential challenges of being human and inspiring others to fill the gaps of its unaddressed questions with exquisite answers of their own.

The vast majority of our mental, emotional, and spiritual suffering comes from the violent collision between our expectations and reality. As we dust ourselves off amid the rubble, bruised and indignant, we further pain ourselves with the exertion of staggering emotional energy on outrage at how reality dared defy what we demanded of it.

From this follows a curious, infuriating fundament of our humanity: that no matter what another person does — to us or at us or near the self-membraned bubble of our being — our inner response to it lives in the realm of feeling, that sovereign source of light over which we alone have agency and dominion. Even more infuriatingly, Marcus Aurelius reminds us, our outrage at some entirely predictable misbehavior by a person known to misbehave is a failure not of the other but of our own powers of reason:

Observing that to explode with rage at the offender would make no positive difference to their conduct and would only further perturb your own soul, he instead offers a two-step process for dealing with the situation, telescoping into the broad existential perspective and then microscoping into your own innermost values: