BULLETS
by Brayden
This is one of them — composed by Brayden, performed by Miracle, and animated by Ukrainian filmmaker and artist Stas Santimov.
If, a century and two World Wars before her, Baudelaire was right — he was — when he observed that “genius is nothing more nor less than childhood recovered at will,” and if it is true — it is — that we need a new kind of moral genius to build a more livable world without the wrongs of violence, then children might hold the building blocks of the building blocks. 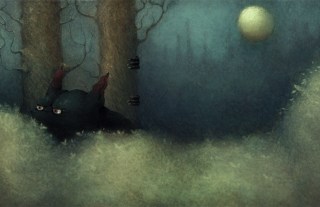 Relax, people. Go to sleep.
After nearly a decade of teaching poetry to young children — and letting children teach her the poetics of reality seen with the clearest eyes — Kangas teamed up with documentary filmmaker Josh Kun in what became their lovely project Preschool Poets, inviting artists from around the world to animate eight of the children’s tenderest and most touching poems.

[embedded content]
As she got to know the children and their families, she also discovered that they were writing their poems with their lives — lives often strewn with hardship and violence and loss, but also irradiated by an innocent gladness and irrepressible hunger for connection, for beauty, for wonder.
“What is essential in the future is that every member of the family, even little children, should learn at whatever cost not to give way to wrong or to co-operate in it,” the pioneering X-ray crystallographer and Quaker peace activist Kathleen Lonsdale wrote as she considered the real building blocks of a livable world a decade into the Cold War.

Fire, eat wood.
After thirty years of working as a librarian and after seeing art education vanish from American schools over the decades, florist and poet Nancy Kangas began leading a poetry program as artist in residence at a preschool in Columbus, Ohio. She was quickly staggered by the plain, poignant ways in which children who could neither read nor write so readily named their hopes and fears — those elemental human longings coursing through the inner child that lives in each of us, deep beneath the strata of self-protective pretense we call adult personhood.
Boundless gratitude to Brazilian artist Daniel Bruson — who animated Tracy K. Smith’s poetic serenade to our human hunger for truth and meaning from the second chapter of The Universe in Verse and who was one of the eight artists selected to animate the preschoolers’ poems — for pointing me to this immeasurably wonderful project, the documentary about which might just be the brightest spot in your day. Or year. (It was in mine.)
Trees, color your leaves.
She discovered that children are silent virtuosi of noticing — both the beauty and the terror that make life life — and noticing is the crucible of all poetry.
Sit down, world
and relax
so you don’t have tornadoes.
Relax, wolves. Lay down by the trees.