At the center of her inquiry is an idea ancient Eastern spiritual traditions, a century of Western neurocognitive science, and epochs of philosophy share: the illusory nature of the self — the self that is always in flux yet rooted in our experience of time, the self we build and rebuild upon a narrative foundation, the self separated from the other by a marvelously permeable boundary, the self of which nature can so easily and profoundly strip us during a solar eclipse, the self into which we fortress our whole sense of identity and from which we peer out to receive our whole view of the world, only to discover again and again that the fortress is an appearance in consciousness filled with what Borges called “the nothingness of personality.”
Harris ends her rigorous reconnaissance mission of the terra semicognita of consciousness studies with the telescopic perspective that is the poetry of possibility:
[…]
[Without a self], consciousness could persist as is, while the character and content change, depending on the arrangement of the specific matter in question. Maybe content is sometimes shared across large, intricately connected regions and sometimes confined to very small ones, perhaps even overlapping. If two human brains were connected, both people might feel as if the content of their consciousness had simply expanded, with each person feeling a continuous transformation from the content of one person to the whole of the two, until the connection was more or less complete. It’s only when you insert the concepts of “him,” “her,” “you,” and “me” as discrete entities that the expanding of content for any area of consciousness (or even multiple areas merging) becomes a combination problem. 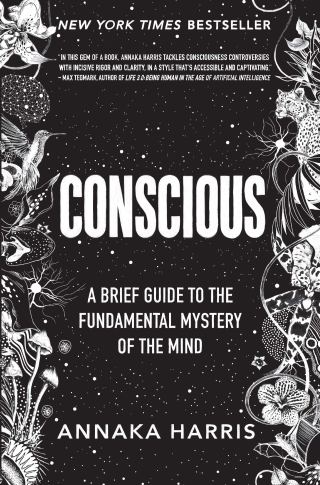 Bucke himself had been greatly influenced by, then befriended and in turn influenced, Walt Whitman — a poet enraptured by how science illuminates the interconnectedness of life, who contemplated the strangest and most paradoxical byproduct of consciousness “lifted out from all else, calm, like the stars, shining eternal”: our sense of self.

“Any live mind today is of the very same stuff as Plato’s & Euripides,” the young Virginia Woolf meditated in her diary two millennia later. “It is this common mind that binds the whole world together; & all the world is mind.”
Drawing on the intricate neurological processes and disorders that shape and misshape our conscious experience, on the behavior-altering effects various parasites have on their hosts, and on her own experience of staggering changes in preference, habit, and temperament on the hormonal cocktail of pregnancy, Harris writes:

Iris Murdoch — one of the most brilliant and underappreciated philosophical minds our species has produced — provided a potent antidote to the combination problem in her lovely notion of unselfing, rooted in the recognition that “the self, the place where we live, is a place of illusion.” In this light, the combination problem becomes decidedly less problematic — without the notion of a subject, a concrete entity to be combined with another concrete entity, there is no combining to be done. Consciousness becomes both the vessel of experience and the content of experience, and transcends both — more field than form.

When I talk about the mystery of consciousness — referring to something I can distinguish and wonder about and attribute (or not) to other entities — it seems highly unlikely that I would ever do this, let alone devote so much time to it, without feeling the experience I am referring to (for the qualitative experience is the entire subject, and without it, I can have no knowledge of it whatsoever). And when I turn these ideas over in my mind, the fact that my thoughts are about the experience of consciousness suggests that there is a feedback loop of sorts and that consciousness is affecting my brain processing.

With an eye to the muddling, misconstrual, and ample misapplications of panpsychism as a framework that could broaden the conversation on consciousness but instead often shuts it down, Harris does the essential and courageous public service of lens-clearing:

After citing research on split-brain patients, in whom mental function and the contents of consciousness can be divided in astonishing ways, Harris writes:
What emerges is the intimation that we are not merely machines that think — after all, many of our machines now “think” in the sense of processing information and adapting it to govern behavior — but machines that think about thinking, lending our biochemical machinery an edge of the miraculous not (yet) explicable by our science, which remains our mightiest technology of thought. She observes:
Coined in the sixteenth century by the Italian philosopher and proto-scientist Francesco Patrizi, whose work inspired Galileo, from the Greek pan (“all”) and psyche (“mind” or “spirit”), panpsychism is the idea that all matter is endowed with the capacity for subjective experience of immaterial quality — the sort of experience we call, in its expression familiar to us, consciousness.

A century ago — a century during which humanity split the atom, unraveled the mysteries of our genetic code, and heard the sound of spacetime for the first time — quantum theory originator Max Planck insisted that “science cannot solve the ultimate mystery of nature… because… we ourselves are part of nature and therefore part of the mystery that we are trying to solve.” In the first year of that century, Lord Kelvin took the podium at the British Association of Science to declare that “there is nothing new to be discovered in physics,” while at the same moment, a young patent clerk in Zurich was incubating the ideas that would converge into his theory of relativity, forever transfiguring our elemental understanding of reality. It is our human nature to consider the inconceivable impossible, again and again mistaking the parameters of the conceivable for the perimeter of the possible. But it is also the nature of the human mind — that material miracle of electrical and poetic impulses — to transcend its own limits of imagination again and again, inventing new parameters of thought that broaden the perimeter of the possible until it becomes real.

Paradoxically, this misunderstanding of panpsychism is often used as an argument against panpsychism itself, not against its misunderstanding. But to actually consider a lichen or a quark endowed with a measure of consciousness is to recognize that its experience cannot, by structural definition, be anything close to our subjective human experience of consciousness — our qualia and their byproduct: the sense of self.

The idea that “I” am the ultimate source of my desires and actions begins to crumble [and] it’s hard to see how our behavior, preferences, and even choices could be under the control of our conscious will in any real sense. It seems much more accurate to say that consciousness is along for the ride — watching the show, rather than creating or controlling it. In theory, we can go as far as to say that few (if any) of our behaviors need consciousness in order to be carried out. But at an intuitive level, we assume that because human beings act in certain ways and are conscious — and because experiences such as fear, love, and pain feel like such powerful motivators within consciousness — our behaviors are driven by our awareness of them and otherwise would not occur.

Where our intuitions break down most dramatically and where the breakdown most disorients us is in what may be the most poorly branded and therefore poorly understood theory of consciousness: panpsychism.

For many scientists and philosophers, the combination problem presents the biggest obstacle to accepting any description of reality that includes consciousness as a widespread feature. However, the obstacle we face here once again seems to be a case of confusing consciousness with the concept of a self, as philosophers and scientists tend to speak in terms of a “subject” of consciousness. The term “self” is usually used to describe a more complex set of psychological characteristics — including qualities such as self-confidence or a capacity for empathy — but a “subject” still describes an experience of self in its most basic form… Perhaps it’s wrong to talk about a subject of consciousness, and it’s more accurate to instead talk about the content available to conscious experience at any given location in space-time, determined by the matter present there — umwelts applied not just to organisms, but to all matter, in every configuration and at every point in space-time.

And yet, she observes, many of the actions we attribute to consciousness and hold up as proof of it could, in theory, take place without consciousness, in a machine programmed to operate by logical sequences resulting in those selfsame actions. (That, after all, is the most thrilling and terrifying question of artificial intelligence.) She posits a curious meta-exception:

Two years earlier, in the first year of the twentieth century and the final year of his life, the uncommonly minded Canadian psychiatrist Maurice Bucke had formalized this notion in his visionary, controversial book Cosmic Consciousness: A Study in the Evolution of the Human Mind, which influenced generations of thinkers ranging from Albert Einstein to Abraham Maslow to Steve Jobs.
Humanity is young, and we’ve barely begun to understand our place in the cosmos. As we continue to look out from our planet and contemplate the nature of reality, we should remember that there is a mystery right here where we stand.