If it were true, therefore, as Christianity assumed, that only love can forgive because only love is fully receptive to who somebody is, to the point of being always willing to forgive him whatever he may have done, forgiving would have to remain altogether outside our considerations. Yet what love is in its own, narrowly circumscribed sphere, respect is in the larger domain of human affairs. Respect, not unlike the Aristotelian philia politikē, is a kind of “friendship” without intimacy and without closeness; it is a regard for the person from the distance which the space of the world puts between us, and this regard is independent of qualities which we may admire or of achievements which we may highly esteem. Thus, the modern loss of respect, or rather the conviction that respect is due only where we admire or esteem, constitutes a clear symptom of the increasing depersonalization of public and social life.
Without being forgiven, released from the consequences of what we have done, our capacity to act would, as it were, be confined to one single deed from which we could never recover; we would remain the victims of its consequences forever, not unlike the sorcerer’s apprentice who lacked the magic formula to break the spell. Without being bound to the fulfillment of promises, we would never be able to keep our identities; we would be condemned to wander helplessly and without direction in the darkness of each man’s lonely heart, caught in its contradictions and equivocalities — a darkness which only the light shed over the public realm through the presence of others, who confirm the identity between the one who promises and the one who fulfills, can dispel. Both faculties, therefore, depend on plurality, on the presence and acting of others, for no one can forgive himself and no one can feel bound by a promise made only to himself; forgiving and promising enacted in solitude or isolation remain without reality and can signify no more than a role played before one’s self.
Trespassing is an everyday occurrence which is in the very nature of action’s constant establishment of new relationships within a web of relations, and it needs forgiving, dismissing, in order to make it possible for life to go on by constantly releasing men* from what they have done unknowingly. Only through this constant mutual release from what they do can men remain free agents, only by constant willingness to change their minds and start again can they be trusted with so great a power as that to begin something new.

The very need for forgiveness, Arendt observes in a chapter titled “Irreversibility and the Power to Forgive,” springs from “the irreversibility and unpredictability of the process started by acting” — a process fundamental to what it means to be alive. We act because we are, but we don’t always act along the axis of who we aspire to be. Aspiration is a sort of promise — a promise we make to ourselves and, sometimes, to the world. Forgiveness is only ever needed, and possible, because of the inherent tension between action and aspiration. Arendt writes:

In this respect, forgiveness is the exact opposite of vengeance, which acts in the form of re-acting against an original trespassing, whereby far from putting an end to the consequences of the first misdeed, everybody remains bound to the process, permitting the chain reaction contained in every action to take its unhindered course. In contrast to revenge, which is the natural, automatic reaction to transgression and which because of the irreversibility of the action process can be expected and even calculated, the act of forgiving can never be predicted; it is the only reaction that acts in an unexpected way and thus retains, though being a reaction, something of the original character of action. Forgiving, in other words, is the only reaction which does not merely re-act but acts anew and unexpectedly, unconditioned by the act which provoked it and therefore freeing from its consequences both the one who forgives and the one who is forgiven. The freedom contained in Jesus’ teachings of forgiveness is the freedom from vengeance, which incloses both doer and sufferer in the relentless automatism of the action process, which by itself need never come to an end.

The discoverer of the role of forgiveness in the realm of human affairs was Jesus of Nazareth. The fact that he made this discovery in a religious context and articulated it in religious language is no reason to take it any less seriously in a strictly secular sense… Certain aspects of the teaching of Jesus of Nazareth which are not primarily related to the Christian religious message but sprang from experiences in the small and closely knit community of his followers, bent on challenging the public authorities in Israel, certainly belong among them, even though they have been neglected because of their allegedly exclusively religious nature.

The possible redemption from the predicament of irreversibility — of being unable to undo what one has done though one did not, and could not, have known what he was doing — is the faculty of forgiving. The remedy for unpredictability, for the chaotic uncertainty of the future, is contained in the faculty to make and keep promises. The two faculties belong together in so far as one of them, forgiving, serves to undo the deeds of the past… and the other, binding oneself through promises, serves to set up in the ocean of uncertainty, which the future is by definition, islands of security without which not even continuity, let alone durability of any kind, would be possible in the relationships between [us].

Arendt observes that punishment is not the opposite of forgiveness but an alternative to it — one enfeebled by the paradox that human beings are “unable to forgive what they cannot punish and that they are unable to punish what has turned out to be unforgivable.” (Yes, do read that again; turn it over in your mind like a Zen koan — I did — until it unfolds its subtle riches of profound wisdom.) She considers the complicated and ofter superficially understood relationship between forgiveness and love — the least public emotion upon which, somehow, the foundation of all public and political life rests:

“To forgive is to assume a larger identity than the person who was first hurt,” poet and philosopher David Whyte observed as he dove for the deeper meanings of our commonest concepts. But, as James Baldwin and Margaret Mead demonstrated in their historic conversation about forgiveness and the crucial difference between guilt and responsibility, Western culture has a confused understanding of what forgiveness really requires of us and what it really gives us — a confusion tangled in the conflicting legacies of Ancient Greek culture, that primordial womb of drama and democracy, with its politically immature notions of justice, and Christian dogma, with its incomplete and psychologically puerile conceptions of love.

Against this backdrop, forgiveness can only ever be a communal experience. More than half a century after Arendt, in a cultural moment so inflamed with reflexive indictment and so clouded with the saccharine delirium of self-righteousness, it is nothing less than an act of countercultural courage and resistance to regard this wisdom with unwincing receptivity. Such courage asks of us what Arendt terms “the good will to counter the enormous risks of action by readiness to forgive and to be forgiven, to make promises and to keep them.” There is, after all, nothing riskier than willingness, and nothing more rewarding.

To disentangle this cultural confusion into a lucid and luminous understanding of forgiveness demands an uncommon largeness of spirit and depth of intellect, an uncommon breadth of erudition and historical knowledge, and an uncommon sensitivity to what it means to be human. That is what the uncommon Hannah Arendt (October 14, 1906–December 4, 1975) accomplishes throughout The Human Condition (public library) — the superb 1958 book that gave us her insight into how we invent ourselves and reinvent the world.

The capacity for forgiveness and the enactment of that capacity in the willingness to forgive is what holds the sphere of human experience together — the private sphere as much as the public sphere, for forgiveness is as vital in our deepest personal bonds as it is in the collective experience of public life. In a sentiment the great civil rights leader John Lewis would echo in his life-earned conviction that “forgiveness and compassion must become more important principles in public life,” Arendt writes:

Forgiving and the relationship it establishes is always an eminently personal (though not necessarily individual or private) affair in which what was done is forgiven for the sake of who did it… It is the reason for the [Christian] conviction that only love has the power to forgive. For love, although it is one of the rarest occurrences in human lives, indeed possesses an unequaled power of self-revelation and an unequaled clarity of vision for the disclosure of who, precisely because it is unconcerned to the point of total unworldliness with what the loved person may be, with his qualities and shortcomings no less than with his achievements, failings, and transgressions. Love, by reason of its passion, destroys the in-between which relates us to and separates us from others… Love, by its very nature, is unworldly, and it is for this reason rather than its rarity that it is not only apolitical but antipolitical, perhaps the most powerful of all antipolitical human forces.

With one of her exquisite pirouettes of logic, Arendt thus delivers us at — and delivers us from — the most dangerous fault line in the Christian model, a fault line that must be sealed and healed before we can have a less confused, more complete and generative understanding of forgiveness: one based not on the emotionally intoxicating but unstable experience we call love but on the ethically and intellectually grounded orientation of respect. She writes:

To live in a world without forgiveness, she intimates, is to make of life an instant fossil record, each imperfect action instantly ossifying us into a failed promise of personhood:

In a passage evocative of Oliver Sacks’s stirring first-hand lesson in choosing empathy over vengeance, she adds: 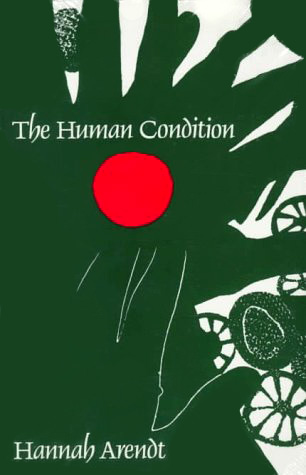 As a secular philosopher and one of the greatest champions of reason amid one of the most unreasonable epochs in the history of our civilization, Arendt observes:
Complement this fragment of Arendt’s enduringly illuminating The Human Condition with philosopher Martha Nussbaum — in many ways an intellectual heir of Arendt’s — on anger and forgiveness, then revisit Arendt herself on love and how to live with the fundamental fear of loss.