That should be a good thing for fans as they work to expand virtual racing series, lean on each other for the NextGen Race Car project, and as NASCAR uses iRacing as a training tool for NASCAR’s Drive for Diversity class. Of course, the coolest part remains real-life race tracks starting life as courses for virtual racers first. That’s just plain awesome.
Climb in the driver’s seat for the latest car news and reviews, delivered to your inbox twice weekly.

The next time the NASCAR series debuts a new race track, it will have come from a video game first — iRacing. On Tuesday, NASCAR announced a new partnership with the sim racing video game iRacing that will see all future race tracks designed virtually within the video game first. Then, the tracks will come to the real world.

Now playing: Watch this: The 3 best wheels and pedal setups for iRacing
The new partnership is actually an extension of past doings between the two entities. NASCAR’s eNASCAR virtual series lives within iRacing, and it’s been over 10 years since the video started licensing NASCAR for virtual racing purposes. In other words, the two are simply growing more tightly knit. 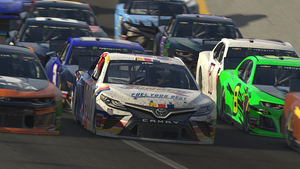