When pressed on what US infrastructure could be improved, Musk suggested better airports, double-decker highways and a tunnel system for electric vehicles — especially as Tesla works on autonomous driving. “But I don’t see a strong effort in this direction,” he said.
Tesla and SpaceX CEO Elon Musk spoke out Monday against CEO roles in companies, also slamming the bipartisan infrastructure bill and calling the government’s expenditure “crazy.” Speaking via video link at the Wall Street Journal CEO Council Summit, Musk also talked about Neuralink brain implants, the Tesla Cybertruck and the SpaceX Starship.

On his own science programs, Musk said the “preposterously difficult” Starship will be “the difference between humanity being a single-planet species and a multiplanet species” — if it works. He reiterated that the Neuralink project is working well in monkeys and that he’s hoping to have it in the first humans, such as quadriplegics and tetraplegics, next year, pending FDA approval.

“If you don’t cut government spending, something really bad’s gonna happen,” he elaborated. “This is crazy. Our spending is so far in excess of revenue. It’s insane. Like you could zero out all billionaires in the country … you still wouldn’t solve the deficit.”
Elon Musk warned Mars travel will be dangerous.
When asked about the federal government’s infrastructure bill, Musk said “you can’t just spend trillion more than you earn every year.”
Speaking to a room full of CEOs, Musk said there are only three titles at a company that mean anything: President, secretary and treasurer. “All these other titles are just basically made up. CEO is a made-up title, CFO is a made-up title, general counsel is a made-up title. They don’t mean anything,” Musk said, pointing out he changed his title to Tesla technoking.
One area where he said government involvement is good is in a strong science program, he added, like a Mars probe.
See the latest cars and automotive trends from supercars to SUVs. Delivered Tuesdays and Thursdays.
Musk also confirmed that Tesla is aiming for Cybertruck volume production in 2023 and that he’ll reveal more during the next earnings call in early 2022. “It may be our best product ever,” he said.
“We don’t have ivory tower management or engineering,” he said, speaking from his new Tesla Gigafactory in Texas. “The management and engineering is as close to the factory as possible. So you can see what’s going on in the factory and just stay grounded.”
Musk criticized provisions for building an electric vehicle charging network across highways, likening them to the government providing support to build gas stations. “There’s no need for this, for supporting a charging network,” he said. “Delete it. Delete. I’m literally saying get rid of all subsidies.”
On the EV purchase tax credit, Musk pointed out that Tesla stopped getting that “like two years ago,” adding that when it comes to innovation and electric vehicles, the government should act as a referee rather than a player on the field. Musk also said he didn’t see the value in the R&D provisions of the bill. 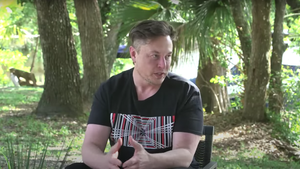