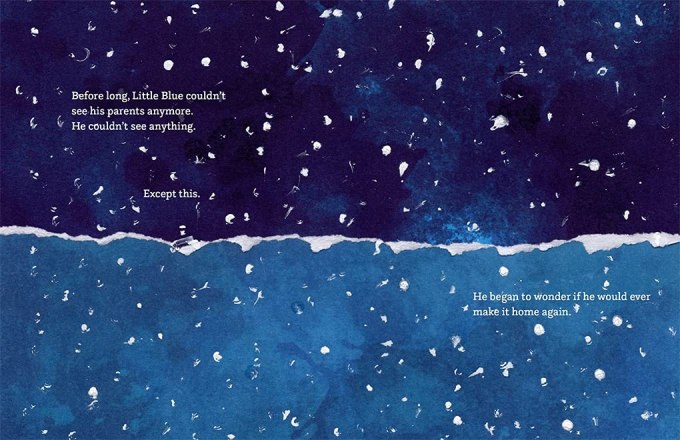 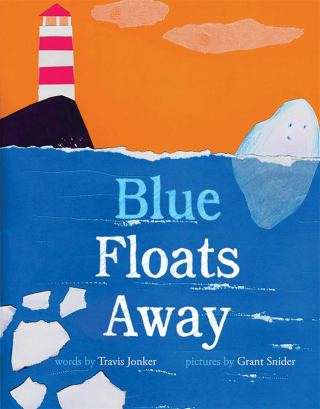 This paradox of transformation comes alive with uncommon tenderness, through a singular lens — the science and poetics of Earth’s water cycle — in Blue Floats Away (public library) by Travis Jonker, an elementary school librarian by day and an author by night, and Grant Snider, an orthodontist by day and an artist (yes, that artist) by night.
New things. 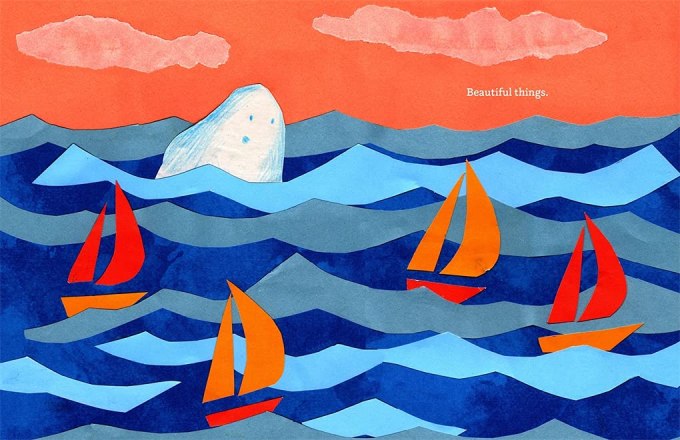 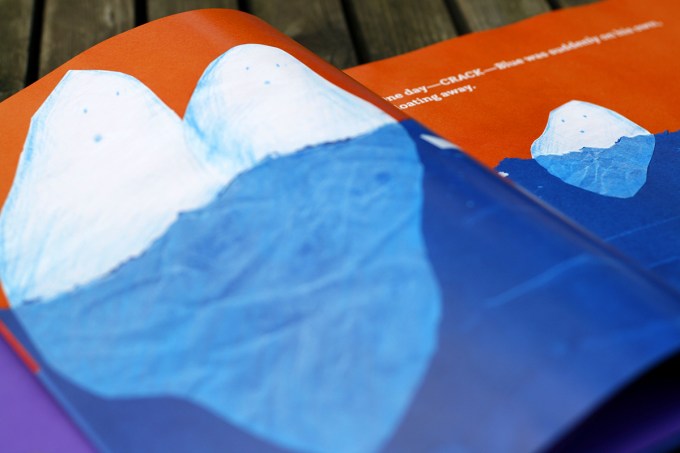 But this might also be the most hopeful aspect of our consciousness — that we know ourselves only incompletely; that the life we have is only a subset of our possible life; that we are capable of having experiences which profoundly transform how we live our lives in this house of sinew and soul, transforming in the process the very texture of who we believe ourselves to be.
Floating far above the ocean, he learns about the compass directions and he marvels at the aurora borealis as he drifts poleward across the night sky. 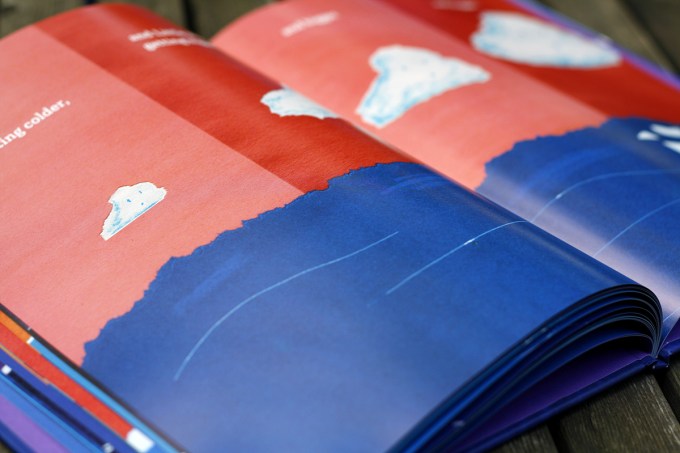 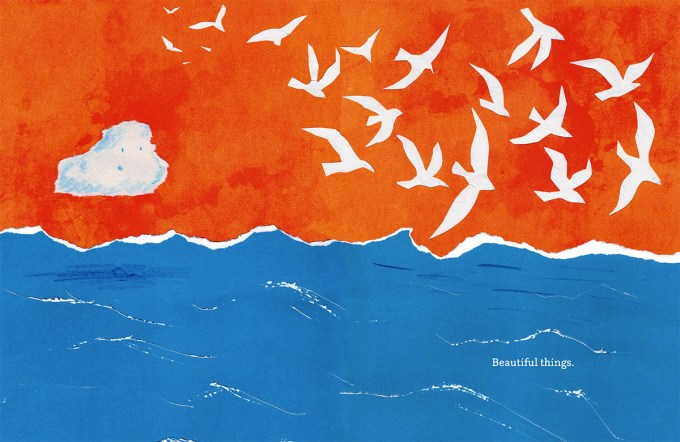 Little Blue is an iceberg youngster suddenly separated from his parents and sent adrift on his own from the North Pole into the wide oceanic unknown.
Although the story ends on the classic happy-ending note of a fairy tale — Little Blue, in his cloud embodiment, is reunited with his parents — Jonker takes care to cast no false enchantment. On the final page, an author’s note details the science of Earth’s increasingly precarious water cycle and urges the young reader to counter climate change with daily actions that even a child could take — those seemingly simple but profound transformations of habit on the individual level that, across the sweep of time and generations, shape the transformation of consciousness on the civilizational level.
And then, as the air grows colder and the latitude higher, Little Blue suddenly starts growing bigger and bigger, until snowflakes begin to shed from him as the winds return him to his original Northern homeland. 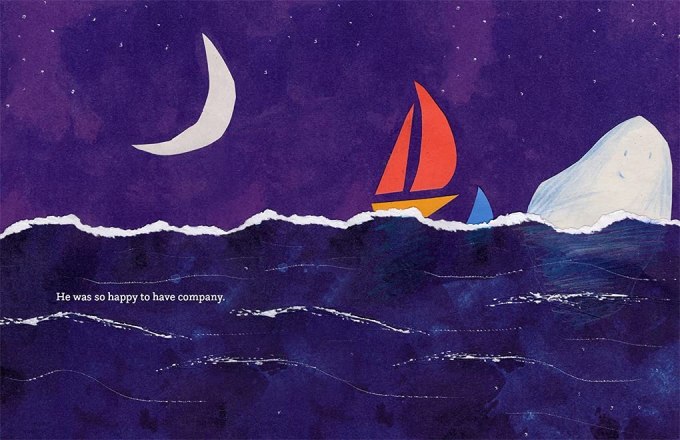 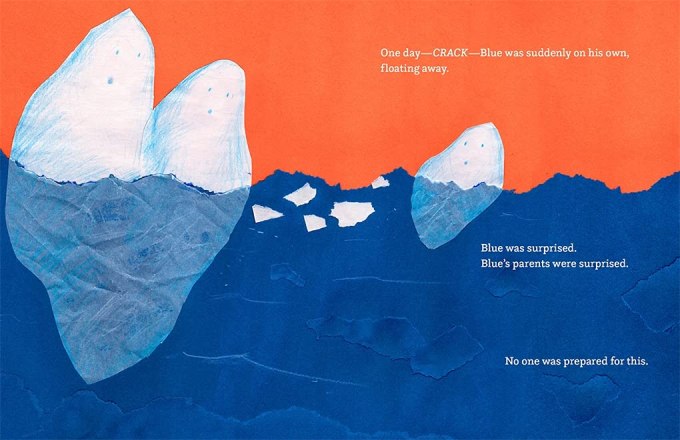 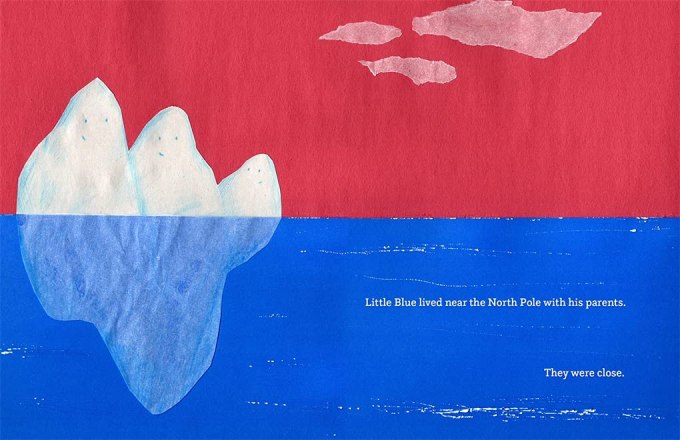 Complement Blue Floats Away with Ellen Meloy on water as a portal to transcendence and What Color Is Night — Snider’s solo serenade to the nocturnal blues — then revisit the world’s most poetic marine biologist on the ocean and the meaning of life.
But just as he begins understanding the currents and devising a way to ride them back home, the unimaginable happens — Little Blue melts into the tropical waters and becomes part of the ocean.

“The things we want are transformative, and we don’t know or only think we know what is on the other side of that transformation,” Rebecca Solnit wrote in her unsurpassable Field Guide to Getting Lost. 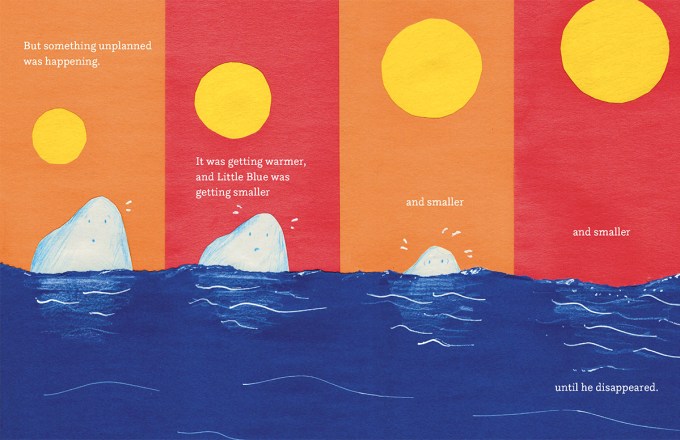 Along the way, Little Blue gets to know the open waters of the world, discovers “new things, beautiful things,” makes new friends with boats and sharks and the Moon.

Beautiful things.
This might be the greatest challenge of our consciousness — that when life beckons us to broaden our inner landscapes of possibility, it calls on us to choose experiences the transformative power of which we might not be able to recognize and desire with the yet-untransformed self, and so we might not choose to have them. (Philosophers have explored this paradoxical blind spot to transformative experiences in an elegant thought experiment known as the vampire problem.) 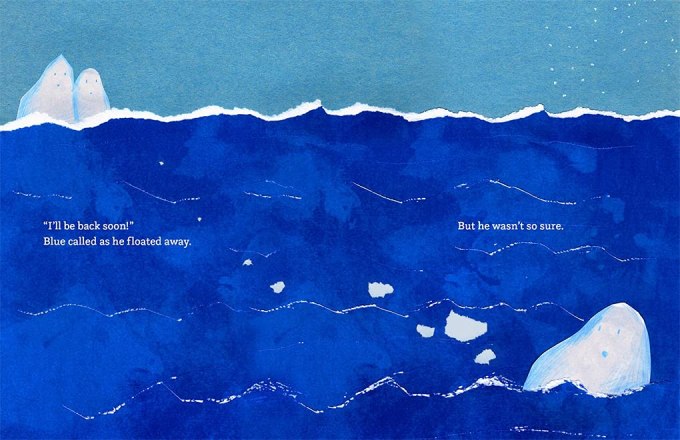 Then, just as unimaginably, as the equatorial heat turns water to vapor, Little Blue is transformed once again — into a joyous little cloud. 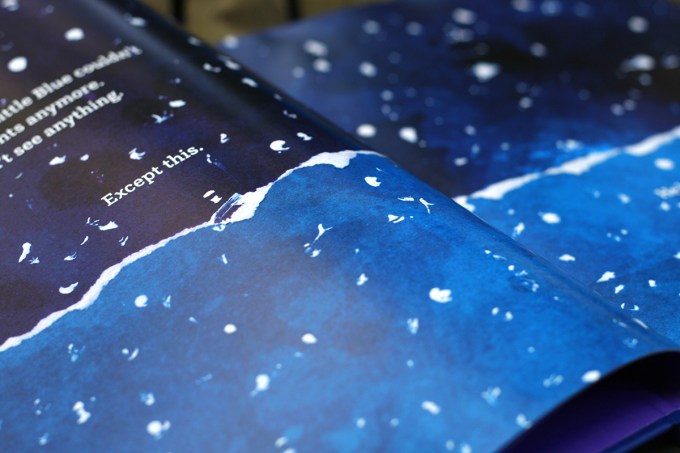 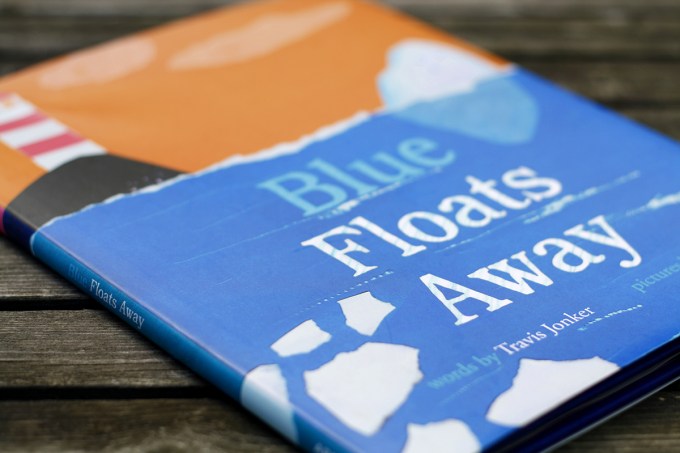 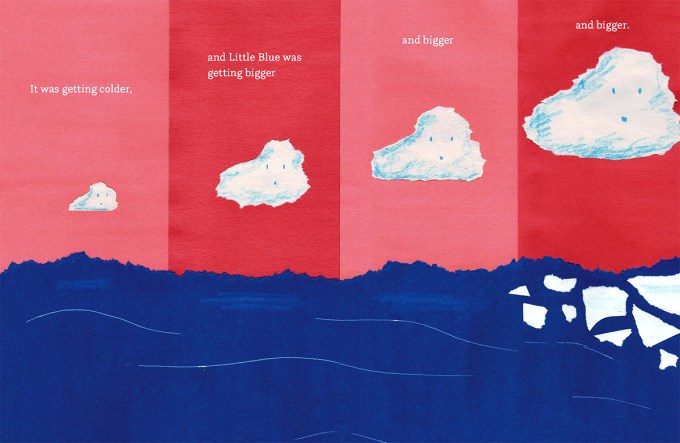