Our anxiety about the finitude of time is at bottom a function of the limits of attention — that great strainer for stimuli, woven of time. Our brains have evolved to miss the vast majority of what is unfolding around us, which renders our slender store of conscious attention our most precious resource — “the rarest and purest form of generosity,” in Simone Weil’s lovely words. And yet, Burkeman argues, treating attention as a resource is already a diminishment of its reality-shaping centrality to our lives. In consonance with William James — the original patron saint of attention as the empress of experience — Burkeman writes:
And so insecurity and vulnerability are the default state — because in each of the moments that you inescapably are, anything could happen, from an urgent email that scuppers your plans for the morning to a bereavement that shakes your world to its foundations. A life spent focused on achieving security with respect to time, when in fact such security is unattainable, can only ever end up feeling provisional — as if the point of your having been born still lies in the future, just over the horizon, and your life in all its fullness can begin as soon as you’ve gotten it, in Arnold Bennett’s phrase, “into proper working order.”
Leaning on Carl Jung’s perceptive advice on how to live, Burkeman makes poetically explicit the book’s implicitly obvious and necessary disclaimer:
Any finite life — even the best one you could possibly imagine — is therefore a matter of ceaselessly waving goodbye to possibility… Since finitude defines our lives… living a truly authentic life — becoming fully human — means facing up to that fact.
A generation after Richard Dawkins made his exquisite counterintuitive argument for how death betokens the luckiness of life, Burkeman offers a fulcrum for pivoting our intuitive never-enough-time perspective to take a different view of the time we do have:

We have different coping strategies for managing the melancholy onus of having to choose. I am aware that my reliance on daily routines, unvaried meals, interchangeable clothing items, recursive playlists, and other life-loops is a coping mechanism aimed at automating certain choices in order to allay the anxiety and time-cost of having to make them afresh each day. Others orient orthogonally to the problem, avoiding making concrete choices and commitments, in life and in love, in order to keep their options “open” — an equally illusory escape from the grand foreclosure that is life itself.
The more you try to manage your time with the goal of achieving a feeling of total control, and freedom from the inevitable constraints of being human, the more stressful, empty, and frustrating life gets. But the more you confront the facts of finitude instead — and work with them, rather than against them — the more productive, meaningful, and joyful life becomes.

Annie Dillard captured this sentiment best in her haunting observation that “how we spend our days is, of course, how we spend our lives” — a poetic sentiment that, on a hectic day, becomes an indictment. What makes our attention so vulnerable to distraction is the difficulty of attending to what is consequential in the grandest scheme — a difficulty temporarily allayed by the ease of attending to the immediate and seemingly urgent but, ultimately, inconsequential. (Who among us would, on their deathbed, radiate soul-gladness over the number of emails they responded to in their lifetime?) “People are drawn to the easy and to the easiest side of the easy,” Rilke admonished a century before social media’s stream of easy escape into distraction, before productivity apps and life-hacks and instaeverything. “But it is clear that we must hold ourselves to the difficult.”

And so we get to the crux of our human predicament — the underbelly of our anxiety about every unanswered email, every unfinished project, and every unbegun dream: Our capacities are limited, our time is finite, and we have no control over how it will unfold or when it will run out. Beyond the lucky fact of being born, life is one great sweep of uncertainty, bookended by the only other lucky certainty we have. It is hardly any wonder that the sweep is dusted with so much worry and we respond with so much obsessive planning, compulsive productivity, and other touching illusions of control.

A decade ago, when I first began practicing with my mindfulness teacher while struggling to make rent and make meaning out of my borrowed stardust, one meditation she led transformed my quality of life above all others — both life’s existential calibration and its moment-to-moment experience:

If you can face the truth about time in this way — if you can step more fully into the condition of being a limited human — you will reach the greatest heights of productivity, accomplishment, service, and fulfillment that were ever in the cards for you to begin with. And the life you will see incrementally taking shape, in the rearview mirror, will be one that meets the only definitive measure of what it means to have used your weeks well: not how many people you helped, or how much you got done; but that working within the limits of your moment in history, and your finite time and talents, you actually got around to doing — and made life more luminous for the rest of us by doing — whatever magnificent task or weird little thing it was that you came here for.

Denying reality never works, though. It may provide some immediate relief, because it allows you to go on thinking that at some point in the future you might, at last, feel totally in control. But it can’t ever bring the sense that you’re doing enough — that you are enough — because it defines “enough” as a kind of limitless control that no human can attain. Instead, the endless struggle leads to more anxiety and a less fulfilling life.

The exercise instantly clarifies — and horrifies, with the force of its clarity — the empty atoms of automation and unexamined choice filling modern life with busyness while hollowing it of gladness. What emerges is the sense that making a meaningful life is less like the building of the Pyramids, stacking an endless array of colossal blocks into a superstructure of impressive stature and on the back of slave labor, than like the carving of Rodin’s Thinker, cutting pieces away from the marble block until a shape of substance and beauty is revealed. What emerges, too, is the sense that the modern cult of productivity is the great pyramid scheme of our time.
Whenever we succumb to distraction, we’re attempting to flee a painful encounter with our finitude — with the human predicament of having limited time, and more especially, in the case of distraction, limited control over that time, which makes it impossible to feel certain about how things will turn out… The most effective way to sap distraction of its power is just to stop expecting things to be otherwise — to accept that this unpleasantness is simply what it feels like for finite humans to commit ourselves to the kinds of demanding and valuable tasks that force us to confront our limited control over how our lives unfold.
After taking a delightful English jab at the American-bred term “life-hack” and its unfortunate intimation that “your life is best thought of as some kind of faulty contraption, in need of modification so as to stop it from performing suboptimally,” Burkeman frames our present predicament:

In consequence, we lose sight of the fundamental tradeoff that the price of higher productivity is always lower creativity. All of it, Burkeman observes, is the product of an anxiety about time that springs from our stubborn avoidance of the elemental parameters of reality. A century and a half after Emily Dickinson lamented that “enough is so vast a sweetness… it never occurs, only pathetic counterfeits,” he writes:

Worry, at its core, is the repetitious experience of a mind attempting to generate a feeling of security about the future, failing, then trying again and again and again — as if the very effort of worrying might somehow help forestall disaster. The fuel behind worry, in other words, is the internal demand to know, in advance, that things will turn out fine: that your partner won’t leave you, that you will have sufficient money to retire, that a pandemic won’t claim the lives of anyone you love, that your favored candidate will win the next election, that you can get through your to-do list by the end of Friday afternoon. But the struggle for control over the future is a stark example of our refusal to acknowledge our built-in limitations when it comes to time, because it’s a fight the worrier obviously won’t win. 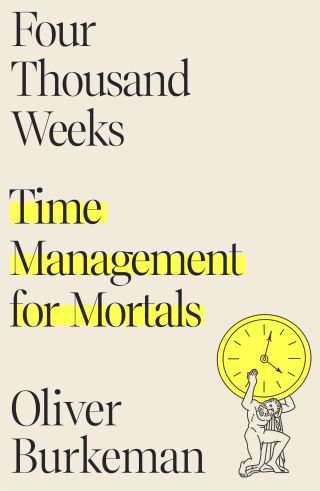 It’s only by facing our finitude that we can step into a truly authentic relationship with life.