“It includes delicate tissues like antennae, mouthparts lined with fine hairs, large compound eyes, and even the gills,” Javier Luque, a Harvard paleontologist and co-lead author of the study, said in a press release.
The tiny crab, Cretapsara athanata, was discovered in Myanmar.

During the Cretaceous period some 100 million years ago, a tiny crustacean crawled out from its marine home and climbed a tree. The crab — only about half the size of a thumbnail — unwittingly become entombed in tree sap. For millions of years, it lay untouched, until it was discovered by miners in the Southeast Asian jungle in 2015.

“This is a big moment for crabs.”
It’s not unusual to find all manner of insect and plant life encased within amber. Ancient flies, mosquitoes and even tardigrades have been discovered within the hardened sap. But a crab? A mostly aquatic creature? While it’s common to see crabs climbing trees today, the fossil record indicated their ancestors started to crawl out of the water about 75 to 50 million years ago.
Unlock the biggest mysteries of our planet and beyond with the CNET Science newsletter. Delivered Mondays.
“The diversity of form among crabs is captivating the imagination of the scientific and non-scientific public alike, and right now people are excited to learn more about such a fascinating group that are not dinosaurs,” Luque said.
In a new study, published in the journal Science Advances on Oct. 20, researchers detail the contents of the palm-sized chunk of amber and the clawed critter within. The ancient crustacean, named Cretapsara anthanata, is believed to be the earliest “modern-looking” crabs ever found and the most complete fossil yet discovered.
The authors of the study write they have limited their investigation to amber specimens procured before 2017 and hope the study will help raise awareness of the ongoing conflict.
Of course, that doesn’t explain how the crab came to be entombed, but the team have crafted a couple of hypotheses. The diminutive size of the crustacean suggests it may be a juvenile from an amphibious species. There’s also potential it was migrating onto land, from water, like the famous red crabs of Christmas Island. However it got there, paleontologists are now reaping the rewards, pulling back the curtain on crab evolution.
The fossil, having been collected in Myanmar and sold at a market in China in 2015, also raises ethical questions. Following a military coup by the Tatmadaw in Myanmar in early 2021, the Society of Vertebrate Paleontology drafted an open letter calling for a moratorium on studies of Myanmar amber specimens obtained after January 2021 but note the Tatmadaw had taken control of the mines back in 2017. 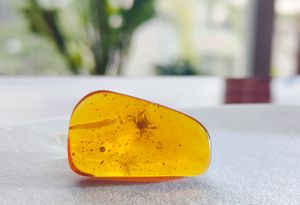