Complement with Virginia Woolf’s literary ecstasy, then revisit the story of how Beethoven made the lawless miracle that is his “Ode to Joy.”
While his litmus test for greatness is aimed at his own art, I find it applies equally to every arena of human creative endeavor:
What separates the good from the great is a question humans have pondered for as long as we have made art. For Tolstoy, it was a matter of emotional infectiousness; for Virginia Woolf, a kaleidoscopic mirror; for Wassily Kandinsky, a kind of harmony; for James Baldwin, a fidelity to life’s discords. For me, no definition has answered this abiding question more simply and more richly than the one the Welsh writer and mystic Arthur Llewellyn Jones, known under the pen name Arthur Machen (March 3, 1863–December 15, 1947), offered in his 1902 book Hieroglyphics (public library | free ebook), composed while he was at last falling in love again, with the woman who would become his second wife, after cancer had widowed him and left him grief-hollowed for years.
The art of literature, [like] all the arts, is quite incommunicable. Many kinds of artifice, even, are unteachable… but art is by its very definition quite without the jurisdiction of the schools, and the realm of the reasoning process, since art is a miracle, superior to the laws. 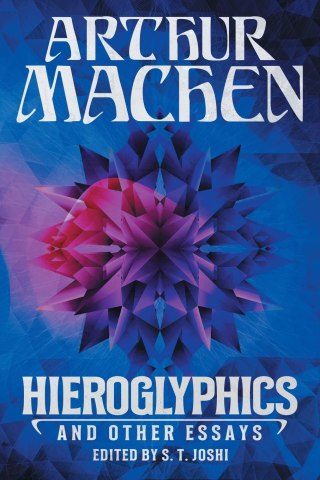 With an eye to his own art — literature — Machen observes that the question of what makes a great work of art is a question of “first principles” and, as such, “asks itself not only of literature, but of life, but of philosophy, but of religion.” He writes:

In this regard, all art is self-help and all art is service. And as Toni Morrison reminds us from the hull of time, “if we serve, we last.”

If ecstasy be present, then I say there is fine literature, if it be absent, then, in spite of all the cleverness, all the talents, all the workmanship and observation and dexterity you may show me, then, I think, we have a product (possibly a very interesting one), which is not fine literature… Substitute, if you like, rapture, beauty, adoration, wonder, awe, mystery, sense of the unknown, desire for the unknown… For some particular case one term may be more appropriate than another, but in every case there will be that withdrawal from the common life and the common consciousness.

Given art’s profoundly partial and human-lensed life in the world, it is a difficult question, an impossible question, maybe even a meaningless question to ask what makes great art. And yet we do ask it, because to begin answering it is to better understand ourselves — to better understand what in us needs nourishing and what calls for communion.

While good art — be it a painting or a poem, a novel or a song — makes our ordinary lives more livable, great art makes them transcendent. It casts a spell of enchantment on the moment and on the epochs, transporting us both away from and deeper into the common plane of living, unlatching some new dimension of consciousness that clarifies us to ourselves.