This story is part of I’m So Obsessed (subscribe here), our podcast featuring interviews with actors, artists, celebrities and creative types about their work, career and current obsessions. “Mason is a little bit like Q from James Bond or Alfred from Batman. He’s the guy that can hook up our hero with everything they need, ” said Fagbenle. “The only difference is there’s a bit of flirting going on, which is curiously absent from Alfred and Q.”
Subscribe to CNET Now for the day’s most interesting reviews, news stories and videos.

O-T Fagbenle is best known for playing Luke on the Hulu series The Handmaid’s Tale. With the fourth season of the Emmy Award-winning series now in the rearview mirror, it’s Fagbenle’s next project that might be his biggest. He stars as Rick Mason opposite Scarlett Johansson as Natasha Romanoff in the Marvel film Black Widow, which opens July 9 in theaters and is available to watch on Disney Plus with Premier Access. It’s the first Marvel Cinematic Universe movie released since 2019’s Spider-Man: Far from Home.

During our lively interview, which you can listen to with the podcast player at the beginning of this story, Fagbenle opened up about set life on The Handmaid’s Tale, what he learned from working with talented and powerful actors like Davis, Johansson and Elizabeth Moss, and how VR can be used to tell stories.
He said that’s where he learned about Obama’s maracas gesture. Over a Zoom video call, Fagbenle acted out the gesture, which involves pretending to hold an invisible maraca. To emphasize a point, instead of pointing a finger, Obama “shook an invisible maraca” as he talked.
For many people, Black Widow will be the first film they see in an actual movie theater since the pandemic started. On CNET’s I’m So Obsessed podcast, Fagbenle acknowledged the hype built up after Black Widow was delayed multiple times during the pandemic. Black Widow is out Friday, and you can watch Seasons 1-4 of The Handmaid’s Tale on Hulu. You can subscribe to I’m So Obsessed on your favorite podcast app. In each episode of CNET’s I’m So Obsessed podcast, Connie Guglielmo or I catch up with an artist, actor or creator to learn about work, career and current obsessions.
Though Black Widow is the biggest film Fagbenle has worked on, his next role might be his biggest. He’ll portray Barack Obama opposite Viola Davis as Michelle Obama in the upcoming Showtime series The First Lady, due out later this year. Aside from exhaustive research and watching numerous documentaries about Obama, Fagbenle also took an offbeat approach to learning more about the former president.
“We’ve all suffered from not having communal experiences. And for us to be able to come together and enjoy a Marvel extravaganza, it’s just so cool,” said an excited Fagbenle. In Marvel’s Black Widow, Scarlett Johansson (left) plays Natasha Romanoff, and O-T Fagbenle (right) plays Rick Mason. Mason is to Romanoff as Alfred is to Batman.
“I’m trying to make a much more sophisticated take on Obama than someone who’s doing a funny impression, because it’s a whole different thing. But really early on when I wanted to get some broad strokes of movement and gesture and voice, I contacted some of his impersonators,” said Fagbenle. 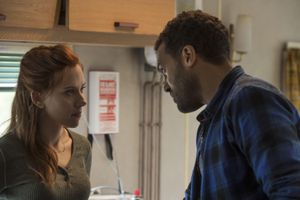