The ruling affirmed a preliminary ruling in August by Chief Administrative Law Judge Charles E. Bolluck, who found Google was in violation of the Tariff Act of 1930. Bolluck, however, didn’t explain what had triggered the infringements.
Google will be barred from importing some products that use technology covered by patents for home audio technology that are owned by speaker maker Sonos.

Get the CNET TVs, Streaming and Audio newsletter

The ruling follows a lawsuit Sonos filed in January 2020, alleging that the search giant stole its technology when the two companies partnered to make sure Google’s music service worked well with Sonos speakers. The Santa Barbara, California-based company alleged that Google infringed on five patents, including tech that lets people listen to audio in different rooms.

The US International Trade Commission issued the ban (PDF) Thursday after affirming a judge’s decision in August that Google infringed on five patents owned by Sonos. However, the decision doesn’t impact current Google products due to modifications made to avoid infringing on the patents.
Become a home entertainment expert with our handpicked tips, reviews and deals. Delivered Wednesdays.
“While Google may sacrifice consumer experience in an attempt to circumvent this importation ban, its products will still infringe many dozens of Sonos patents, its wrongdoing will persist, and the damages owed Sonos will continue to accrue,” Sonos said in a statement.
Sonos applauded Thursday’s decision, calling it an “across the board win.”
Google said that while it disagreed with the decision, it appreciated that the commission approved its modified designs.
“We will seek further review and continue to defend ourselves against Sonos’ frivolous claims about our partnership and intellectual property,” Google spokesperson Jose Castaneda said in a statement.
Sonos won a product import ban in its patent battle against Google. 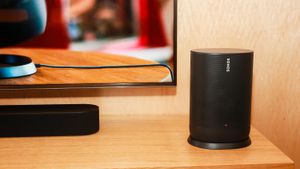