The very practice of legitimization is an act of distortion.
Today, these three spheres — science, music, and magic — appear as self-contained and unrelated disciplines, but in the context of 500 BC, the connections between them were obvious to the leading minds. Anyone who hoped to dislodge magical thinking in a traditional society and replace it with a scientific worldview was forced to address music theory, because it, too, could be conceptualized as either magic or science. Any choice between these two models would have profound implications. And not just for theory: society would be altered by how this matter was decided. Before Pythagoras, songs possessed magical potency. If Pythagoras and his followers hoped to eradicate superstition and elevate a more rational and logical worldview, they were almost forced to redefine all the parameters of musical practice.
But while this reconfiguration of musical practice as a mathematical language advanced the world toward science, it also repressed a central animating force of music — its elemental humanity, ablaze with feeling, sensuality, and a sense of the sacred. Even Schopenhauer, so very German and so unfaltering in his central tenet of the will as the supreme instrument of the human spirit, considered music capable of reaching beyond the reach of will, into “the inner being, the in-itself, of the world”; even Kierkegaard, for all his ceaseless cerebration, his Nordic reserve, and his lifelong virginity, exulted in the unparalleled sensuality of music.

The ratios and proportions that initially helped us grasp songs turned into the rules and constraints that defined them. The strategies and schemas were often seen as the ‘authentic’ music, and the actual sounds only got validation through their allegiance to what was written on the printed page… The eventual result was a conceptualization of music that excluded far more than it allowed.
Greek culture before his arrival revered what we call nowadays Orphic thought (named after Orpheus, the mythical musician, but almost certainly considered a historical personage in those distant days), and believed songs possessed powerful magic. The rise of Pythagorean music theory, circa 500 BC, changed all that by conceptualizing music as a rational science of sounds that could be described in mathematical terms.
Millennia and civilizations earlier, two such visionaries who lived a generation apart, one born the day the other threw herself into the sea — Sappho (c. 630–c. 570 BC) and Pythagoras (c. 570–c. 495 BC) — revolutionized the deepest undertone of modern thought with their repugnant ideas about the most delicate, most beloved, and most elemental of the arts: music.

At every stage in human history, music has been a catalyst for change, challenging conventions and conveying coded messages — or, not infrequently, delivering blunt, unambiguous ones. It has given voice to individuals and groups denied access to other platforms for expression, so much so that, in many times and places, freedom of song has been as important as freedom of speech, and far more controversial.
At the height of the Syrian crisis in 2016, new arrivals would show up on Lesbos almost every day, making their treacherous journey on small boats, rafts, and inflatable crafts… Songs are the possessions most likely to survive long journeys, remaining the property of the newcomer even when everything else has been taken away.
From this foundation laid in the Pythagorean past, Goia leaps across the millennia to the present:

In an era when the most widespread musical instrument was the tetrachord — the Hellenic four-string lyre — and musicians had no standardized system of tuning their instruments, no understanding of the underlying tonal patterns, and nothing more than a vague intuitive sense about how to strum melodies rather than discord, Pythagoras discovered the relationship between musical harmony and the mathematical harmony of numbers. According to his foremost biographer, the fourth-century Syrian scholar Iamblichus, Pythagoras took it upon himself to devise a mechanical aid for musical tuning.
In our time, Pythagoras, known to every schoolchild for his famous triangle theorem, is celebrated as the pioneer who set the golden age of mathematics into motion with the development of numeric logic. Having coined the word philosophy and defined the very meaning of wisdom, he seeded scientific ideas that fomented the later revolutions ushered in by visionaries as far-ranging and far-reaching as Plato, Copernicus, Descartes, Kepler, Newton, and Einstein.
It was Sappho who feathered the other great wing by which music took flight toward modernity, carrying the whole of human culture on its back. Goia writes:

“To create today is to create dangerously,” Albert Camus told a gathering of young people at the peak of the Cold War, shortly after becoming the second-youngest laureate of the Nobel Prize. “The question, for all those who cannot live without art and what it signifies, is merely to find out how, among the police forces of so many ideologies… the strange liberty of creation is possible.” A generation before him, as the world was seething with the ideologies that would soon unworld it in the first global war, the artist Egon Schiele wrote as he faced policing while revolutionizing art: “The ‘many’ are those who are dependent upon each other… The ‘few’ are the direct leaders of the world because they introduce only that which is new and are therefore repugnant.”

Sappho has two obvious concerns, and they dominate her worldview even as they expose a hidden rift in Western thought: the emotional bonds of love, and communal obligations to the gods. In the later evolution of Western music, these two approaches will veer off into their separate traditions and have little to do with each other. You could hardly imagine two music genres with less in common than love songs and religious hymns, but for Sappho these are intimately connected.

And yet while the Pythagorean model of mathematically distinguishing melody from noise liberated music by giving it a new language of codified expression, it also limited music by excluding from the musical canon styles that didn’t conform to these proportionate structures of scales and rhythms — styles like those that emerged from the African diaspora or from my own native Balkans. Goia writes:

Holding up Pythagoras as the most significant figure in the history of music, whose controversial contribution was both a liberation and a limitation, Goia writes:

Still, the Pythagorean conceptualization of music had profound and beneficent consequences, stretching far beyond the realm of music and into the entire landscape of culture: By bringing mathematics to an art-form previously regarded as mystical, it catalyzed the slow shift from a world of superstition and magic to a world of science and reason — a cultural evolution that would unfold on the scale of epochs. Two millennia after Pythagoras, Kepler would spend years defending his mother in a witchcraft trial while revolutionizing our understanding of the universe with his epoch-making laws of planetary motion, drawing on the Music of the Spheres to discover the proportional relationships of planetary orbits.

Looking back to antiquity from our own era, in which algorithms are mediating the relationship between music, feeling, and transcendence, Goia adds:

In a sentiment that calls to mind Iris Murdoch’s astute observation that “tyrants always fear art because tyrants want to mystify while art tends to clarify,” Goia frames his approach:
Although the anecdote may belong to that murky shoreline between the apocryphal and the factual that marks many biographies of genius, Pythagoras did eventually test these ratios on the lyre. They proved to be perfectly predictive of harmony — the first discovery of a mathematical rule undergirding a physical phenomenon, and the basis of what became known as the Music of the Spheres.
One day, Iamblichus’s account goes, Pythagoras was strolling past a blacksmith’s forge and was captivated by the sound of the many hammers pounding in a pattern that suddenly sounded harmonious. He rushed into the forge and immediately began investigating the cause of the harmony, testing the various hammers in various stroke combinations — some producing harmony, others discord. After analyzing the patterns and weighing the hammers, he discovered a simple mathematical relationship between those that produced harmony — their masses were exact ratios of one another’s.

While Pythagoras took the mysticism of music and turned it into a mathematical language, Sappho took the ancient tradition of sacred singing and turned it into a new literary genre of personal poetics. By pioneering the love song and the self-permission for telling our own stories, drawn from our most intimate experiences, she gave the world an immense and abiding gift — the ability to preserve our stories in song as a fundament of identity and survival, from the African spirituals that sustained the souls of the enslaved to the folk ballads by which refugees hold on to culture and community. In fact, Sappho’s home island has always been a nexus of cultures and remains a major portal into Europe for refugees from the Middle East. Goia writes:

The very first algorithm entered Western music with this philosophical rupture that happened more than 2,500 years ago. 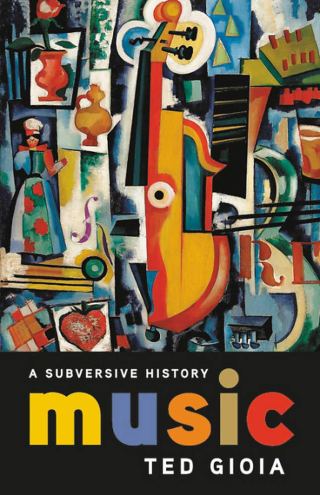 When the Library of Alexandria was burned, the flames consumed the nine-volume set of Sappho’s collected works, leaving only fragments copied by fans and scholars throughout the ancient world. From this handful of surviving ashes, Sappho rose with her lyre and her verse to be remembered as the Tenth Muse, the inventor of the love song and the personal lyric, the first great beacon of women’s right to creative expression, and the first great champion of the right to love whom we love. Unlike Emily Dickinson, who deliberately changed the gender pronouns in her poems to conceal the same-sex passion that fomented her poetry, Sappho kept the female pronouns in the beautiful and heartbreaking odes she wrote to the women she loved. In doing so, she pioneered a radical shift in musical culture — the permission to sing not about the gods, the seasons, and the wars, but about oneself: about the stunning interior universe of subjective human experience. Without Sappho, there would be no Nina Simone to pose in song the central question of consciousness: “I wish you could know what it means to be me.”

In another stroke of radicalism, the Pythagoreans admitted into their school a class of sub-citizens denied education and excluded from the newborn civic system of democracy: women. One of them became the world’s first known female astronomer — Hypatia, who lived her trailblazing life and died her savage death in the city where nearly every trace of Sappho vanished.

But in his time, Pythagoras was very much a radical, a dissident, an intellectual deviant. His progressive views on social reform led him to flee the tyrannical rule of his native Samos. After arriving in the Greek colony of Croton as a refugee, he founded a philosophical school whose disciples, known as the Pythagoreans, devised an unexampled model of the universe, placing at its center a ball of fire more than a thousand years before Copernicus upended the geocentric Ptolemaic system with his heliocentricity.

Complement this fragment of the altogether fascinating Music: A Subversive History with a haunting choral invocation of Sappho’s timeless elegy for heartbreak, then revisit Maurice Sendak on the shape of music as the key to storytelling and some of humanity’s most beloved storytellers on the singular power of music.

The epoch-making contributions of Pythagoras and Sappho come alive in Ted Goia’s altogether wonderful book Music: A Subversive History (public library) — the story of our species told through its most consummate and intimate art-form, traced through the lives of the visionaries and radicals who shaped it, from Pythagoras and Sappho to Bob Dylan and N.W.A.