Illustrations courtesy of Sophie Blackall
With an eye to the dangerous seductions of nostalgia — that longing not for a bygone time but for the bygone selves and certitudes that time contained — she adds: 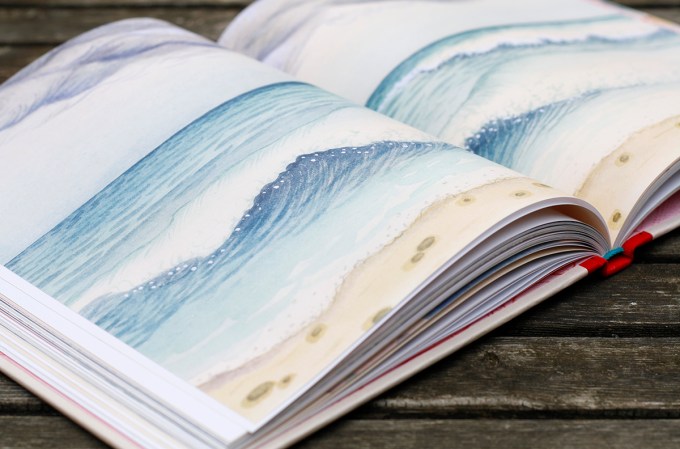 Complement Things to Look Forward to, to which neither screen nor synthesis do service, with Sophie’s splendid animation of Edna St. Vincent Millay’s poem “Dirge Without Music” — a sort of mirror-image counterpart to this elemental awareness that our time, finite and savage with creative force, is all we have — then revisit her illustrated celebration of our shared world.
I tend to put off washing clothes until the last possible day, when I’m reduced to leggings with holes and the mustard top that inspires people to ask if I’m feeling OK, but clean laundry means a whole closet of possibilities. I can dress like a nineteenth-century French farmer or an Edwardian ghost or a deckhand on a whaler off Nantucket. Actually, those are pretty much my three options, but there are many subtle variations.

Pulsating through the book, through the list, through the life is the one thing that saves us all: love — the love of partners and of friends, of children and of flowers, of books and music and list-making and this whole improbable living world. Indeed, the entire book is one extended love letter to life itself, composed of the miniature, infinite loves that animate any given life.

Later, when I met Ed, the man I would fall in love with, I was still a bit blurry, but I saw him in distinct detail. I noticed everything: his beautiful profile, his generous ears, his kind eyes. The way he shoved his T-shirt sleeve up on his handsome shoulder as he talked. His heartbreakingly neat handwriting. The way he was always reading, even when he was walking down the street, underlining without breaking stride. The way he carried everything in a stack: book, extra book, notebook, pen, phone, as though he’d never heard of bags. The way he followed a recipe and put all the ingredients in little bowls. The way his tongue stuck out when he chopped onions or dribbled a basketball or tied a child’d shoe. The way he made all the babies laugh. The way he made me laugh. The way he made my hands tremble.
Wherever we are in the world, we see the same moon. It’s the same moon earliest humans would have seen, waxing and waning, rising and setting. Depending on where we were thousands of years ago, we would look to a full moon to mark time, to tell us when to plant corn, when to lay the rice to dry, and when to expect the ducks back. Now we look to the moon and marvel that men have traveled there in unlikely contraptions and actually set foot on its surface. It is our stepping-stone to the vast universe, and looking at a full moon can make us feel very small and very young. But it can also remind us to make the most of our time here on earth, to pop corn and throw rice and watch for ducks.

I met my husband, Nick, when I was twenty-one, and we moved in together before the year was out. We got married when I was twenty-five, and I had my first child at twenty-six. But I didn’t fall in love, not properly, until I was thirty-six. And it wasn’t with my husband. It wasn’t that Nick and I didn’t love each other. We did. We were best friends. He could play “My Funny Valentine” on his teeth and make anything out of nothing: a 1930s-style playhouse, a shirt out of a vintage tablecloth, Halloween costumes that made the news. He had a blinding temper, but he was as funny as he was angry, so I laughed at least as much as I cried. When we met, he thought he was 5 percent gay. It turned out he was 5 percent straight. But that was enough to make two excellent children, and we thought we were happy.
“How we spend our days is, of course, how we spend our lives,” Annie Dillard wrote in her timeless meditation on living with presence. “Lay hold of to-day’s task, and you will not need to depend so much upon to-morrow’s,” Seneca exhorted two millennia earlier as he offered the Stoic balance sheet for time spent, saved, and wasted, reminding us that “nothing is ours, except time.”

Once a year, he purchases six gray T-shirts and a dozen pairs of black socks and multiples of carefully chosen, unremarkable shirts and pants. On laundry day, his neatly folded piles of clean clothes are so dear and familiar they put a lump in my throat. 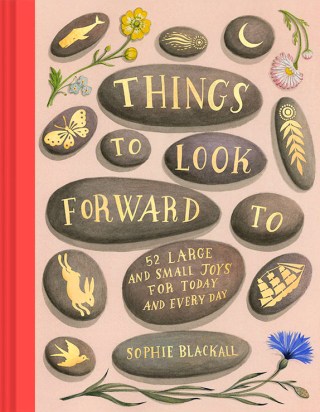 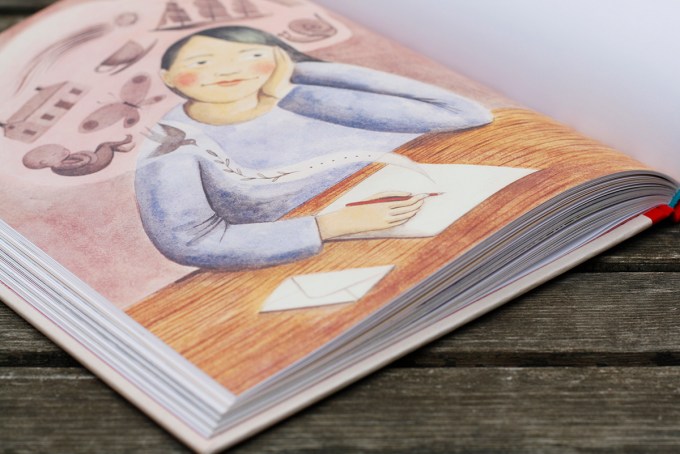 In the thirtieth entry, titled “Clean Laundry” and illustrated with a stack of neatly folded grey T-shirts, Sophie writes:
Tucked between the quiet joys of painting on pebbles and rereading a favorite passage from a favorite book and enfolding a loved one in a simple hug is the unfailing consolation of the cosmic perspective and its simplest, most enchanting guise, which the visionary Margaret Fuller reverenced, a century and a half earlier amid a world torn by revolutions and economic collapse, as “that best fact, the Moon.”

As the list grew and she began drawing each item on it, she noticed how many were things that needn’t wait for some uncertain future — unfussy gladnesses readily available in the now, any now. A century after Hermann Hesse extolled “the little joys” as the most important habit for fully present living, Sophie’s list became not an emblem of expectancy but an invitation to presence — not a deferral of life but a celebration of it, of the myriad marvels that come alive as soon as we become just a little more attentive, a little more appreciative, a little more animated by our own elemental nature as “atoms with consciousness” and “matter with curiosity.”

In the twenty-first entry, devoted to the full Moon, Sophie writes:

My clothes are pre-owned, unruly, and difficult to fold, but my partner wears a uniform. Not the kind with epaulets or creased slacks or his name embroidered on his chest, but a deliberate, self-selected uniform. Ed is a playwright and a teacher, and he heeds the advice of Gustave Flaubert: “Be regular and orderly in your life, so that you may be violent and original in your work.”
What makes the book so wondrous is that each seemingly mundane thing on the list shimmers with an aspect of the miraculous, each fragment of the personal opens into the universal, each playful wink at life grows wide-eyed with poignancy.

Sophie began sharing the illustrated meditations on her Instagram (which is itself a rare island of unremitting delight and generosity amid the stream of hollow selfing we call social media) — each part record of personal gladness, part creative prompt. Delight begets delight — people began sending her their responses to these prompts: unbidden kindnesses done for neighbors, unexpected hobbies taken up, and oh so many sweet strange faces drawn on eggs.
One morning under the hot shower, Sophie began making a mental list of things to look forward to — a lovely gesture of taking tomorrow’s outstretched hand in that handshake of trust and resolve we call optimism.
In the dismorrowed undoing of 2020 — as Zadie Smith was calibrating the limitations of Stoic philosophy in a world suddenly time-warped by a global quarantine, suddenly sobered to the perennial uncertainty of the future — loss beyond the collective heartache besieged the miniature world of my sunny-spirited, largehearted friend and Caldecott-winning children’s book maker Sophie Blackall. She coped the way all artists cope, complained the way all makers complain: by making something of beauty and substance, something that begins as a quickening of self-salvation in one’s own heart and ripples out to touch, to salve, maybe even to save others — which might be both the broadest and the most precise definition of art.

Days with young children can pass by in a blur of drop-offs and pickups, bath time and bedtime, Hot Wheels and carrot sticks and Shrinky Dinks. If you’re in love with your partner I can imagine finding moments to notice each other, managing, even through the blur, to see one another clearly. But if you’re not sure, then you can become kind of blurry yourself.
I have always been a cheerful sort of person, able to find the silver lining in just about any cloud, but 2020 was a son-of-a-cumulonimbus. There was the pandemic, of course, which knocked us all sideways. Like most people, I tried to remain hopeful, counting my blessings, grateful to be alive when so many were dying. But also like most people, I was full of anxiety and fear and grief and uncertainty. My partner, Ed, and I worried about bills, fretted about my aging parents, and missed our kids, who were living away from home. Deciding to downsize, we moved out of the apartment we had happily rented for ten years with our blended family, the longest either of us had ever lived anywhere. We canceled our wedding, because we knew we couldn’t get married without our loved ones. Then in the fall, Nick, the dear, queer father of my children, died in an accident on the other side of the world. The thunderclouds really closed in then, and for a while I struggled to find any rays of hope. I almost lost sight of beauty and wonder and delight. 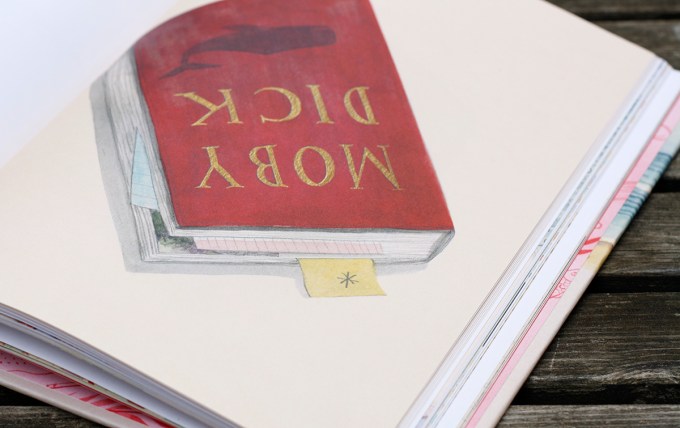 A slipstream of tomorrows hence, her list became Things to Look Forward to: 52 Large and Small Joys for Today and Every Day (public library) — a felicitous catalogue partway between Tolstoy’s Calendar of Wisdom and poet Ross Gay’s Book of Delights, every page of it radiant with the warmth and wonder that make life worth living and mark everything Sophie makes.
I have often found myself romanticizing the Before Times, when we could travel the world and hug our friends and shake hands with strangers, but I have come to the conclusion that it’s better to look forward: to gather the things we’ve learned and use our patience and perseverance and courage and empathy to care for each other and to work toward a better future for all people. To look forward to things like long-term environmental protection and racial justice; equal rights and an inclusive society; free health care and equitable education; an end to poverty, hunger, and war. But we can also look forward to everyday things that will buoy our spirits and make us laugh and help us feel alive and that will bring others comfort and hope.
And I noticed the way he noticed me too. He saw me more clearly than anyone had, ever before. 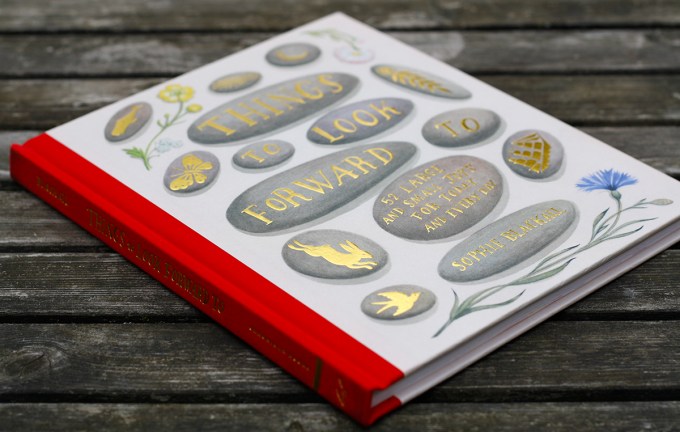 You can relish a rainbow and a cup of tea, sunrise and a flock of birds, a cemetery walk and a friend’s newborn, the first blush of wildflowers in a patch of dirt and the looping rapture of an old favorite song. You can’t tidy up the White House, but you can tidy up that neglected messy corner of your home; you can’t mend a world, but you can mend the hole in the polka-dot pocket of your favorite coat. They are not the same thing, but they are part of the same thing, which is all there is — life living itself through us, moment by moment, one broken beautiful thing at a time. 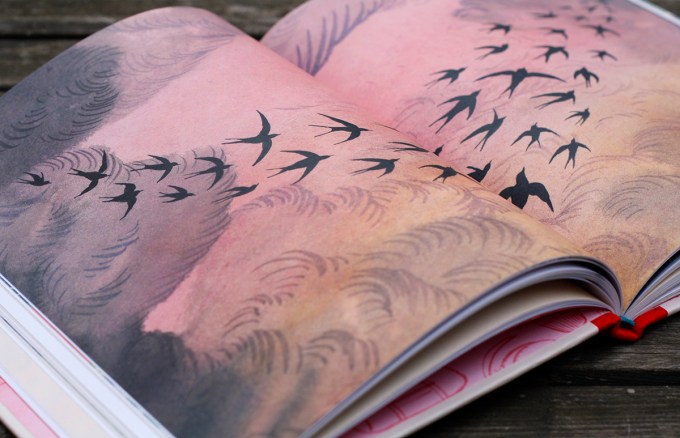 And bit by bit, I realized that I’d previously had no idea, no idea on earth, what it was to be in love and to be loved in return. Those were heady days. Fourteen years later, they still are. The point is, of course, that you can look forward to falling in love with the love of your life, day after day. If you haven’t found love yet, or found it and lost it, then it can find you, perhaps when you least expect it.