My grandmother Wenonah Bond Logan was the most beloved friend of my childhood. She grew up in the racially segregated U.S. South in the early part of the twentieth century, mostly in Alabama. Her family moved to Washington, DC, when she was a teenager; the nation’s capital was also then the segregated South.
“Books feed and cure and chortle and collide,” Gwendolyn Brooks wrote in her 1969 love-poem to reading, after the love of books — the reading of them, the making of them — had made her the first black poet to with the Pulitzer Prize. “Books are meat and medicine and flame and flight and flower.”
Long before she was my grandmother she was a girl with two long, thick braids who used to roller skate to the embassies a few miles from her home and sit on the steps “to imagine the rest of the world was there,” as she’d one day tell me. She’d then continued to stoke her imagining of elsewhere, skating to the public library on Mount Vernon Place to take out stacks of books. She liked to read about other places so she could imagine them, she told me. Most of her friends stayed forever in Washington — nothing wrong with that. But my grandmother’s reading made her dream. Her girlfriends gathered at the train station and wept as they waved her off to storied points north and the hopes of further education, more books.
She writes:

In the 1920s she wrote to a university in Denmark: I am what is known as an American Negro, and I imagine you have never known one. Will you invite me to come and study at your school? This was one of my favorite of her stories. Why Denmark, I would ask her, entranced by her tales of smorgasbord, the puzzle ring she brought back from a suitor that one day became mine, and the sari she began to wear after being mistaken for Indian. Because when I was a teenager I read about the statue of the little mermaid being built, in Copenhagen harbor, and I wanted to see it for myself.

Elizabeth Alexander tells the story of her grandmother’s literature-fomented dreams and their far-reaching tendrils of possibility in her lovely contribution to A Velocity of Being: Letters to a Young Reader (public library) — that labor-of-love collection of 121 original illustrated letters to children about why we read and how books transform us, composed by some of the most inspiring humans in our world, whose character has been shaped by their love of reading: poets and physicists, cellists and entrepreneurs, artists and astronauts.
Meanwhile, seven hundred miles southeast, a seven-year-old girl with a flaming love of reading was asking her grandmother to tell again the story of the most daring dream that had animated her own childhood. That girl would one day become a poet herself — a poet who would one day welcome America’s first black president to the presidency with a stunning poem, only the fourth in the history of a young nation to be read at a presidential inauguration; a poet who would one day herself become president of America’s largest supporter of the arts and humanities, founded the year Brooks penned her poem — the first woman to preside over it and the first woman of color to preside over any large philanthropic organization. 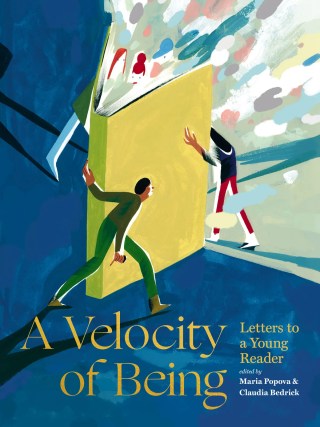 For other voices from the choral serenade to the power and pleasure of reading that is A Velocity of Being, savor Rebecca Solnit on books as repair-kits for life, Anne Lamott on reading as the antidote to loss of perspective, Jane Goodall on how a book fomented the childhood dream that became world-changing reality, Alain de Botton on reading as an empathic bridge between othernesses, Debbie Millman on books as testaments to selflessness, Jacqueline Woodson on reading as a gesture of kindness, Ursula K. Le Guin’s playful and poignant poem about reading, David Whyte on reading to taste the thrill of discovery, and the 101-year-old Holocaust survivor Helen Fagin on how a single book saved a dozen young women’s lives.

My grandmother’s much older sister Carrie was given the privilege of choosing her baby sister’s name. She chose Wenonah because she had read it in a book, in Longfellow’s poem “Hiawatha.” In that poem — which I most remember with the phrase, “On the banks of the Gitchee Goomee” — was found the name for the treasured baby sister who would grow to read books, imagine worlds far beyond her own, and then go out to find them. The unusual beauty of that most apt name was only to be found in the pages of a book.