This is what I saw, now coupled with a perfect soundtrack courtesy of Joan as Police Woman: “Run for Love” from her superb new live record.
In February 2018, I found myself on a friend’s fruit farm in Kauai, having gratefully escaped the short bleak days of Brooklyn winter to finish Figuring. Each day, being a creature of loops and routines, I did my daily sprints along the exact same stretch of gravel by a blooming grapefruit tree on the edge of the farm.
For more snail splendor, savor these stunning 19th-century illustrations from the world’s first pictorial encyclopedia of shell-dwelling creatures.
One morning, just before Valentine’s Day, I halted my stride abruptly to avoid something peach-colored and lovely that the evolutionary triumph of my peripheral vision had registered in my path: two splendid rosy wolfsnails (Euglandina rosea), about to engage in the instantaneous courtship the human version of which has evolved to involve roses and love songs. I knelt on the gravel, sweaty and wondersmitten, to film these slow sensorial lovers with my already antique smartphone for as long as my knee could stand it.
This is how it happens: When a snail finds a partner, the two face each other, gently touching their tentacles together to feel if they like each other. And if they do, they glide their bodies alongside one another in a slow double embrace, until their baby-making parts fit together like puzzle pieces. Then, they gently pierce each other with tiny spears called “love darts,” which contain their genes — the building blocks of bodies. Genes are like tiny seeds your parents plant in the garden that becomes your body — your special combination of seeds is what makes you you, what makes your body-garden unlike anyone else’s. Genes are how life talks to the future.
When artist Ping Zhu first began working on the paintings that would eventually become the illustrations for the book, I giddily sent her the footage of the two rosy wolfsnails, which went on to inform and inspire her soulful interpretation of this wondrous evolutionary dance.
[embedded content]

The privilege of witnessing this love-dance at such intimate range inspired the central metaphor with which I met the greatest conceptual challenge with this children’s book predicated on the romance of reality — the portion of the story about how snails beget snails, tasked with accurately conveying concepts of science and sexuality to young readers who might not have the frame of reference for either: 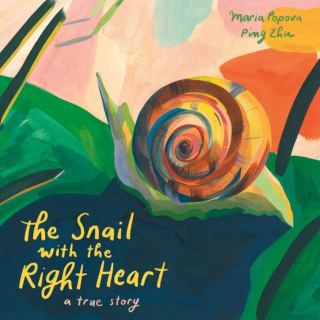 At the time, I had just begun incubating the idea that eventually became The Snail with the Right Heart. As I composed the manuscript over the following months, I kept thinking about these tender creatures, learning about the science behind their mating, and chuckling at the thought of what the perfect soundtrack to their dance might be.
For a poetic PG counterpart, here is the incomparable Sir David Attenborough narrating the almost otherworldly mating dance of the snail’s unshelled cousin, filmed with far superior cinematic technology (if scored with an inferior soundtrack):
[embedded content]