There is poetry in Turing’s insight, poetry and cultural defiance, evocative of the protestation Ada Lovelace had issued a century earlier as she composed the world’s first computer program: “Invert the order!” she had demanded of the cultural hierarchy that ranked, and still ranks, science below poetry and philosophy in poetic and philosophic potential. But it was another young man of countercultural vision who took Turing’s insight and turned it into actual music.
Out of Turing’s uncommon orientation to possibility arose one his most profound and undersung contributions to the modern world: the birth of digital music. Envisioning the computer’s potential as a musical instrument, Turing became the first to compose a computer program for playing notes — the greatest contribution to the universal language since Pythagoras first radicalized music with mathematics.
The perceptual limitation of the eye-brain processor makes us perceive a hummingbird’s wings as an infinity-shaped blur of motion — a misperception that rendered the hummingbird’s flight a thing of magic for millennia, until the invention of the camera and the stroboscope in the 1830s revealed tiny wings moving at sixty distinct beats per second. So too the perceptual limitation of the ear-brain processor blurs the clicks of the hoot command, when repeated rapidly thousands of times per second, into the illusion of a continuous note.

There is no god to save the Queen, to save the kweens, to save any of us and all of us from ourselves — only love and truth, be they manifested in music or in mathematics. Auden, who had escaped the same persecution by little more than luck, knew this when he wrote that “we must love one another or die,” before making making his disillusion postwar revision to “we must love one another and die”; Virginia Woolf knew this when she wrote, while Turing was saving humanity from itself at Bletchley Park, that “there is no Shakespeare… no Beethoven… no God; we are the words; we are the music; we are the thing itself.”
It is a travesty of history that while “God Save the King” was unspooling from the national airwaves in 1951, the King was authorizing orders to criminally prosecute Alan Turing for the natural octave of his love — that elemental symphony of aliveness. A year after the recording was made, after being subjected to chemical castration by the government, this hero of state died vilified by church and country.
In Turing: Pioneer of the Information Age (public library), philosopher and Turing Archive for the History of Computing director B. Jack Copeland writes: 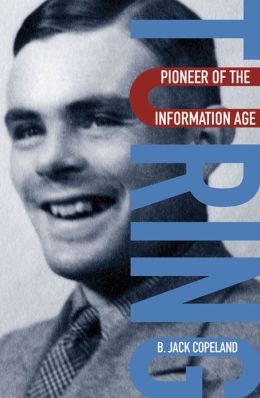 “All truth is comprised in music and mathematics,” Margaret Fuller wrote in the middle of the nineteenth century as she was changing the fabric of the time. Exactly one hundred years after her untimely death, another tragic hero of another century, whose mind would shape the epochs to come, united these twin truths in a single, rapturous force-field of possibility on the pages of a programming manual containing the first instructions for how to compose music on a computer — a foundational marriage of technos and tenderness.

Christopher Strachey (November 16, 1916–May 18, 1975) was thirty-five when he walked into Turing’s Manchester lab. A passionate pianist trained as a mathematician and physicist, he had grown up in Bloomsbury, surrounded by visionaries like Virginia Woolf and John Maynard Keynes, and had gone to King’s College, where he met Turing before the war. Like Turing, Strachey was a young gay man living in a culture of condoned bigotry and criminalized love — a culture still haunted by the ghost of Oscar Wilde, who a mere generation earlier had died for loving whom he loved. In this atmosphere of persecution, Strachey had suffered a severe mental breakdown during his third year at King’s College and had barely graduated. He must have found consolation in code, with its dual gift of programmable predictability and absolute freedom of imagination, for he devoured Turing’s programming manual as soon as it was published, then showed up at his lab, invigorated by the potential of turning binary code into the fluid splendor of music.
The computer’s ‘hoot instruction’ (which he named/V, pronounced ‘slash vee’) worked like this. There was an electronic clock in the computer that synchronized all the operations. This clock beat steadily, like a silent metronome, at a rate of over 4,000 noiseless ticks per second. Executing the hoot instruction a single time made one of these ticks come alive with sound (emitted at the loudspeaker), but the sound lasted only for as long as the tick, a tiny fraction of a second. Turing described the sound as ‘something between a tap, a click, and a thump’. Executing the hoot instruction over and over again resulted in this brief sound being produced repeatedly, on every fourth tick: tick tick tick click, tick tick tick click, and so on.
In 1951, if you were to walk into Turing’s Manchester Mark I computer — for it was a room-sized poem of metal and mind, stacked on post office racks — you would find a loudspeaker hooked to the colossus, emitting a shrill electronic beep whenever the machine ran aground and needed attention. Turing realized that with some imaginative code, this “hooter” could be programmed to sound notes on the musical scale, then become music.

While the world saw early computers as oversized calculators, Alan Turing (June 23, 1912–June 7, 1954) was asking whether a computer could make you fall in love with it. Only those rare artists of the possible can look at something on the cusp of becoming and see what it can be, not as an incremental evolution of the extant and the familiar but as a leap toward the unexampled and the unimagined.
Turing, ecstatic and laconic, pronounced: “Good show.”
Sixty years later, on the other side of the digital epoch Turing had sparked, he would receive posthumous pardon from that King’s daughter, coronated in the final year of Turing’s life; the British government would issue a formal apology for the unpardonable murder of one of humanity’s most visionary and sensitive-souled minds, upon whose ashes the modern world is built.
Turing, in turn, was intrigued by Strachey’s passionate enthusiasm and by the twenty pages of code he had brought with him — fortyfold the longest program to have run on a computer by that point. Turing sat the code-composer down at the colossal machine one evening and left. When he returned in the morning, Strachey’s program was already running and blasted, out of the bewildered blue, a tinny rendition of “God Save the King” — Britain’s national anthem.

After the end of the war — the war he helped end by cracking the Nazis’ Enigma machine and saving inestimable lives by terminating what might have been an interminable war — Turing had moved to Manchester to begin programming his colossal computer, affectionately known as Baby. From the start, he conceived of it not as a calculating device but as a universal machine capable, with sufficient imagination encoded in its native language, of approximating the capabilities of the human mind. When the BBC heard of the pioneering creation, they dispatched a broadcast unit equipped with a portable acetate disc cutter to record the music and stream it into the world’s ear. Turing and Strachey played three pieces for them — “God Save the King,” “Baa Baa Black Sheep,” and Glenn Miller’s “In the Mood.”
The magic by which these ticks became music was a function not of the capabilities of Turing’s machine but of the incapacities of the human mind — the mind that is both instrument and computer; the mind that, for all of its astonishing complexity, still has processing limits.
Sixty-five years later, audio archivists performed a feat of digital detective virtuosity to restore this landmark recording of the world’s first computer music, pitch-warped beyond recognition by time and acetate erosion: