2:17
VW’s caption for the image says “concept car,” but there are too many differences from the original 2017 concept for this sketch to be of anything less than a close-to-production prototype. Thankfully, the shape of the ID Buzz remains extremely faithful to the concept, with a bluff front end that looks just like the one on the original Microbus. We were worried that VW might need to give the Buzz more of a “real” bumper or protruding hood for production, but that doesn’t seem to be the case — the front end has a bit more of a bump to it, but not enough to ruin the styling. It also retains that glorious greenhouse and the quarter windows at the A-pillars, though the pillars do look thicker than the concept’s.

Climb in the driver’s seat

The ID Buzz is inching closer to production.

Alright, back to the autonomous stuff, because it is actually a big deal. Volkswagen says it will introduce autonomous systems for use in real-life traffic by its commercial vehicles in 2025, and field trials are beginning this year in Germany. The self-driving system is developed by Argo AI, which VW made a major investment in last year (alongside Ford), and VW’s aim is to create an autonomous ride-hailing service using the ID Buzz. Said service will be available to regular people in the middle of the decade in “select cities,” likely all in Europe.
Subscribe to Roadshow’s newsletter for the latest car news and reviews, delivered to your inbox twice weekly.
The headlights have more of a rounded, elongated shape that matches that of the ID 4 crossover, instead of the angular units of the concept, and they extend onto the front fenders. The taillights are larger, too, and also extend onto the body side. There’s no more metal trim around the body and front end to give that classic two-tone look, but a line across the body side in the sketch suggests that the production Buzz will still be offered with retro color schemes. Another tell that this is the production model are the intakes in the front bumper, which look far more functional and feasible than the concept’s.

Looking at the Volkswagen ID Buzz concept never gets old 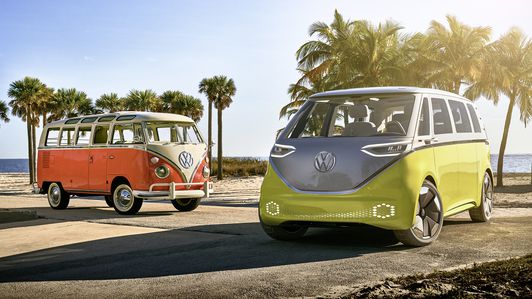 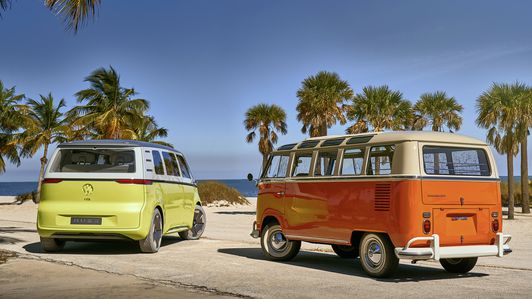 While VW’s commercial vehicle division is using Argo AI’s systems, the company is handling self-driving development for road cars in-house, with Waymo as the benchmark. Volkswagen is also investing billions of dollars in the Car.Software Organisation, which is developing Level 4 autonomous systems for the private mobility sector.
The 2017 ID Buzz concept.

Now playing: Watch this: Get a closer took at the Volkswagen ID Buzz Cargo van