Interestingly, the National Ignition Facility is not primarily meant as a tool for fusion energy development, but rather for nuclear weapons research. Chittenden says the result should spur on other efforts focused on creating clean power.
Remarkably, that’s about 6% of the total energy of all the sunshine striking Earth’s surface at any given moment, although the powerful burst only lasted for 100 trillionths of a second. Even in that minuscule timeframe, though, scientists observed a big breakthrough: The hotspot was able to ignite a self-sustaining chain reaction, fusing more hydrogen atoms together and continuing the process of energy generation, like an internal combustion engine burning through one molecule of fuel after another to keep going.
The experiment took place at the National Ignition Facility, which takes up the space of three football fields at the campus of the Lawrence Livermore National Laboratory on the eastern edge of the San Francisco Bay metroplex. Powerful lasers there were focused onto a target the size of a BB, resulting in a reaction that threw off over 10 quadrillion watts of power.

The target chamber at the National Ignition Facility.
Lawrence Livermore National Laboratory reports that while a final analysis still needs to be peer reviewed, the initial data showed that the results yielded eight times the energy output of experiments done earlier this year and 25 times that seen in 2018.

This month’s experiment was still a net negative in terms of energy in versus energy out, but it puts the science on the threshold of breaking even.
Achieving this ignition point is a key milestone in the roadmap to fusion power. “For reference this [is] about 1000x more energy output than we were getting when I joined the project 10 years ago,” project physicist Jayson Luc Peterson added on Twitter.
For an almost imperceptible fraction of a second on Aug. 8, massive lasers at a government facility in Northern California re-created the power of the sun in a tiny hot spot no wider than a human hair. The result is a significant step forward in the pursuit of nuclear fusion, a long-sought-after panacea for many energy and environmental challenges.
“This phenomenal breakthrough brings us tantalizingly close to a demonstration of ‘net energy gain’ from fusion reactions — just when the planet needs it,” said Arthur Turrell, physicist and author of The Star Builders: Nuclear Fusion and the Race to Power the Planet, in a statement.
For decades now, dozens of facilities have been experimenting with different methods. The challenge isn’t just to achieve fusion, but to do so in a way that doesn’t require more energy to create the reaction than is produced as a result.
From the lab to your inbox. Get the latest science stories from CNET every week.

Nuclear power plants today are fueled by the reaction from nuclear fission, the process of splitting atoms to create energy. Fusion is just the opposite: merging hydrogen atoms into helium the same way the sun does, releasing gobs of energy in the process. Fusion is a sort of holy grail, because theoretically it would provide a limitless source of clean energy with fewer safety and waste concerns compared to fission reactors.
“We have now proven it is possible to reach ignition, giving inspiration to other laboratories and start-ups around the world working on fusion energy production to try to realize the same conditions using a simpler, more robust and above all cheaper method.”
Jeremy Chittenden, co-director of the Center for Inertial Fusion Studies at Imperial College London, said in a statement that improvement in fusion energy output has accelerated over the past year, “suggesting we may soon reach more energy milestones, such as exceeding the energy input from the lasers used to kick-start the process.” 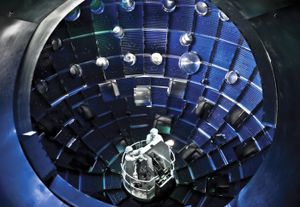