Brown — a woman of uncommon genius and nonconformity — begins with things that seem obvious, even banal. But her singular sensibility quickly becomes apparent: In telling us that the most important thing about the grass is its greenness, she lists among its other attributes the uncommon perception, stated as a common fact, that the grass is “tender,” imbuing so indifferent a life-form with so essentially human a quality. Instantly your mind bursts with scenes of lovers kissing in the grass and children playing in the grass — a single word-choice, and suddenly a universe of feeling. 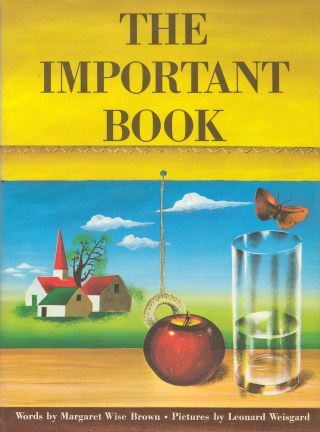 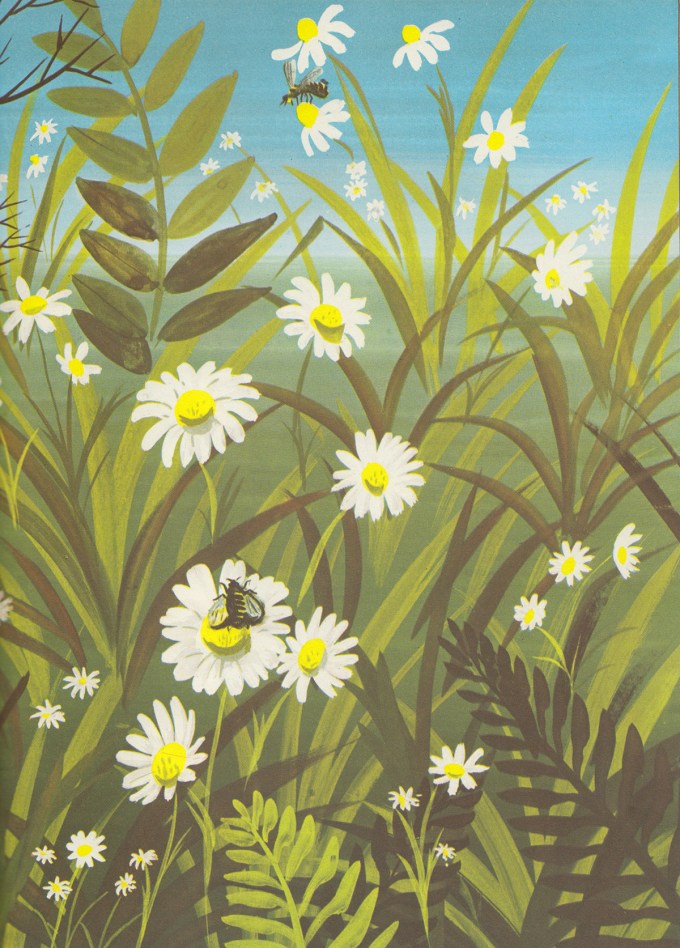 “What is essential is invisible to the eye,” Antoine de Saint-Exupéry wrote as he contemplated the meaning of life in one of humanity’s greatest works of philosophy disguised as a children’s book.
About the snow — which is, most importantly, white — she observes with the same matter-of-factly nonchalance the poetic truth that it has “the shape of tiny stars.” 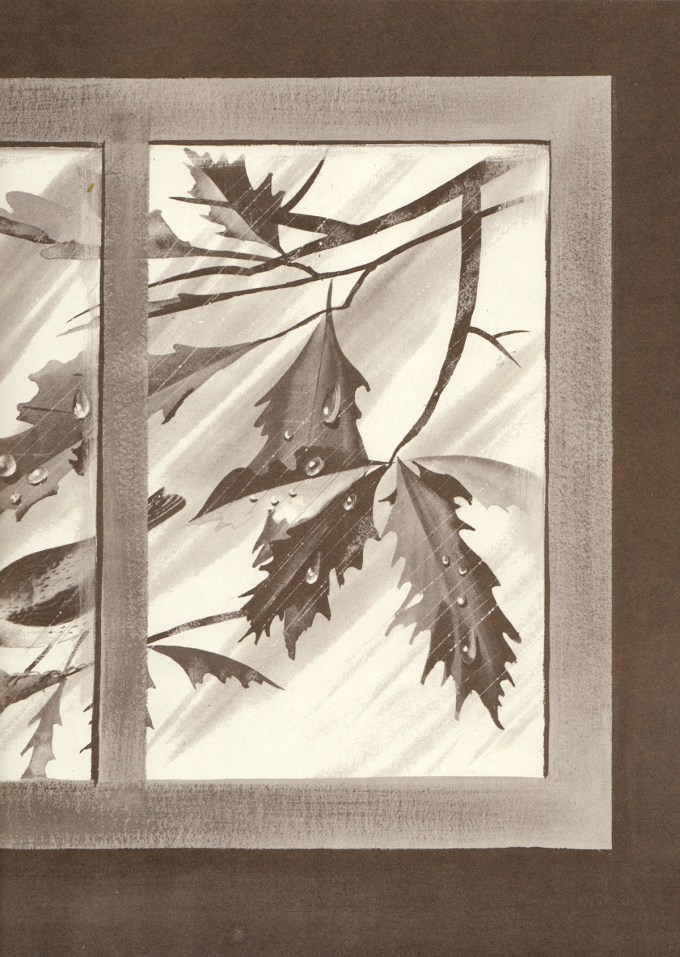 Whatever changes you might undergo in your growth and becoming, Brown intimates, the important thing about you remains the same:
But to me (being the particular person I am) the loveliest and most important thing about The Important Book, radiating the essence of Brown’s personhood, is what appears on the back flap in place of the standard author and artist “about” text:
The challenge, of course, is that what is essential — about the totality of life, as about every littlest thing in it — is not easily visible, largely because nothing is actually reducible, or should be reduced, to an essence: to a single point of truth, a particular attribute or quality that makes it what it is.
Brown ends the book with the ultimate question of essences, which has puzzled philosophers since the ship of Theseus in Aristotle’s day: what makes you you — a constellation of atoms made of the selfsame stardust as every other person, yet singular, irreducible, unrepeated in any past configuration of matter and unrepeatable in any future.
All prejudice is at bottom essentialism: Some animals are more equal than others because it is their essential nature to be oppressor or oppressed; all entitlement is at bottom essentialism: I am owed something just by virtue of being me. 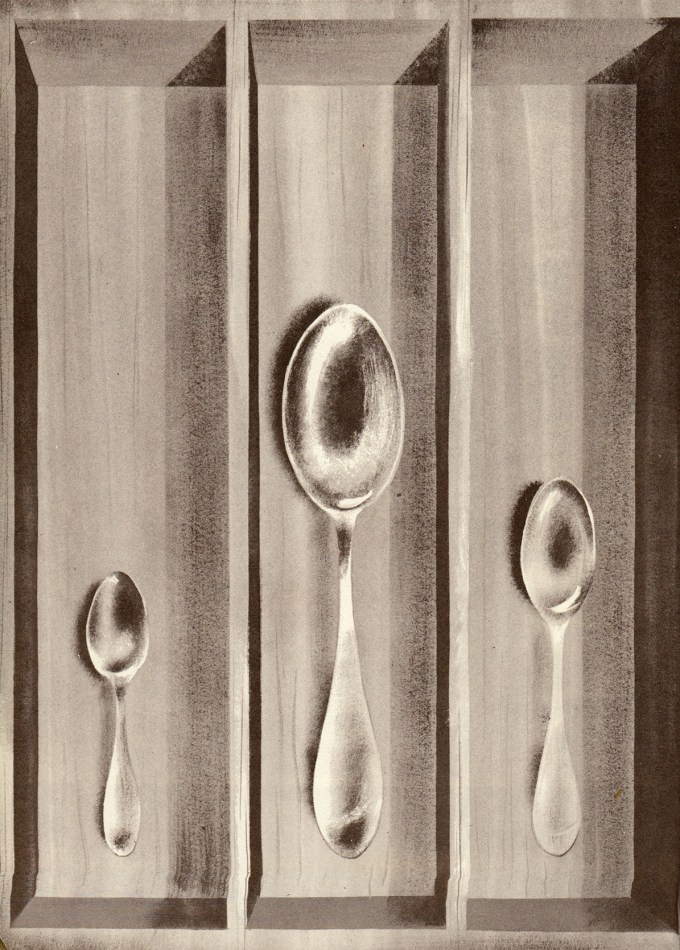 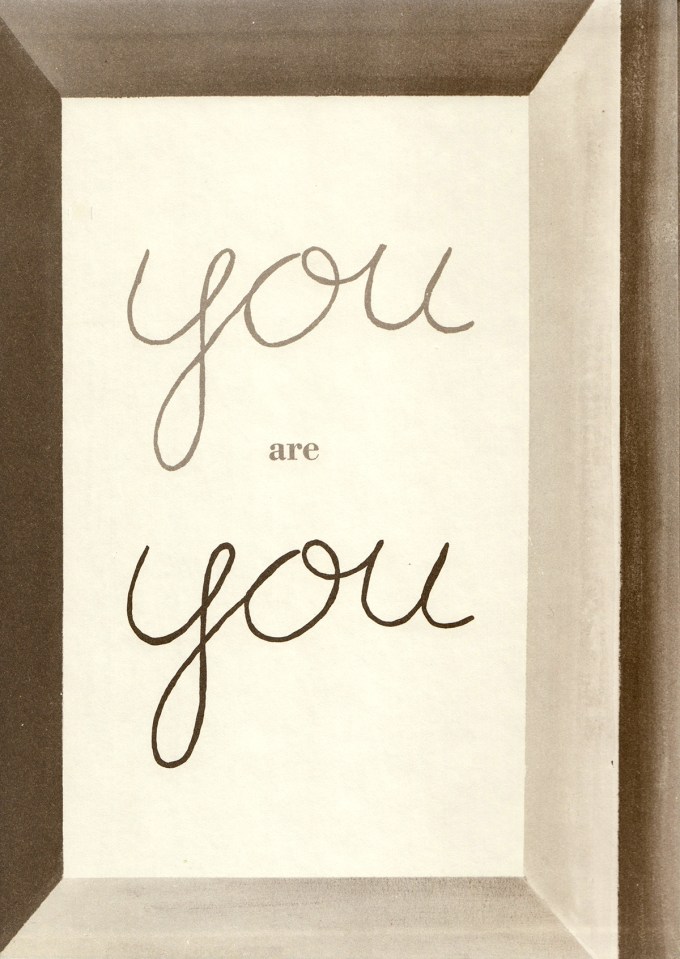 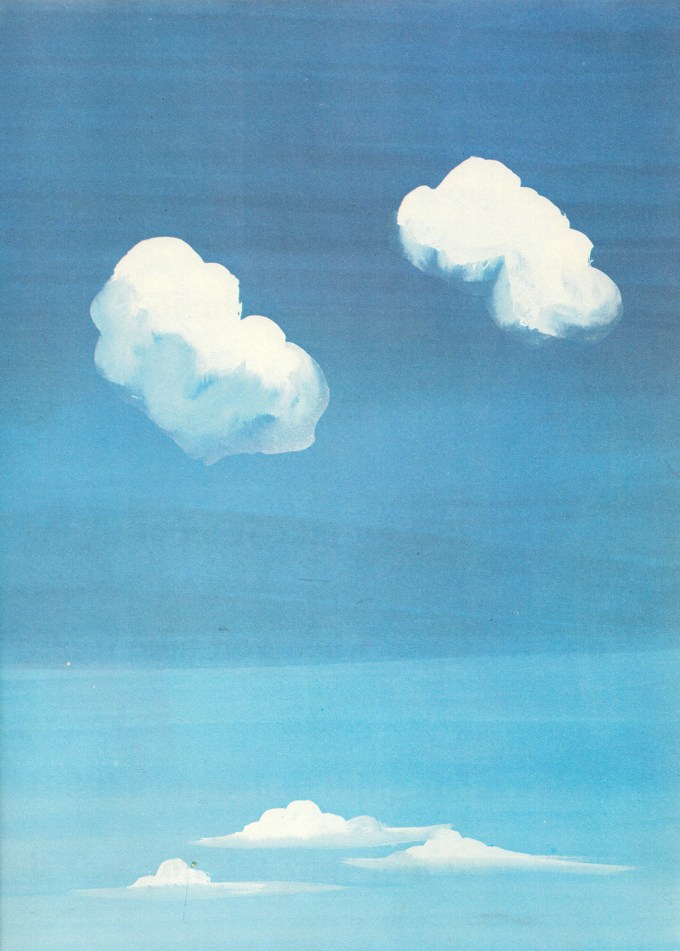 While Saint-Exupéry’s Little Prince was making his otherworldly way into our mutable and multifarious world, Margaret Wise Brown (May 23, 1910–November 13, 1952) was taking up the question of what is essential from a very different angle in The Important Book (public library) — a minimalist, subversively conceptual, maximally delightful inquiry into the essence of a thing.
And yet we have betrayed the complexity of life with our longing for the shorthand of essences at least since Ancient Greece. The crucible of democracy was also the crucible of its antipode in essentialism — the idea that everything has an innate potentiality, which predetermines (and therefore limits) its possible development, and that, no matter what external forces are exerted on it, this innate essence remains immutable.
The important thing about X is Y.
X is also A, B, and C.
But the important thing about it is Y.
It must have been a comfort to her, to write these words in 1949, as her longtime lover Blanche — a poet and playwright, who wrote under the masculine pen name Michael Strange — was dying of leukemia.
She moves through the most essential things about other common objects and phenomena: a spoon, an apple, the wind. But as the book progresses, there arises the strange and lovely awareness that you are being guided through the ordinary world by an extraordinary mind who sees the commonest things in uncommon ways.
Essentialism is the human animal’s faulty coping mechanism for the fact that the world and everything in it is multifaceted and mutable, often dizzyingly so — something Chinua Achebe captured in his astute observation that “there is no one way to anything,” because nothing is one thing only, to be grasped by only one dimension and to serve only one possible purpose. 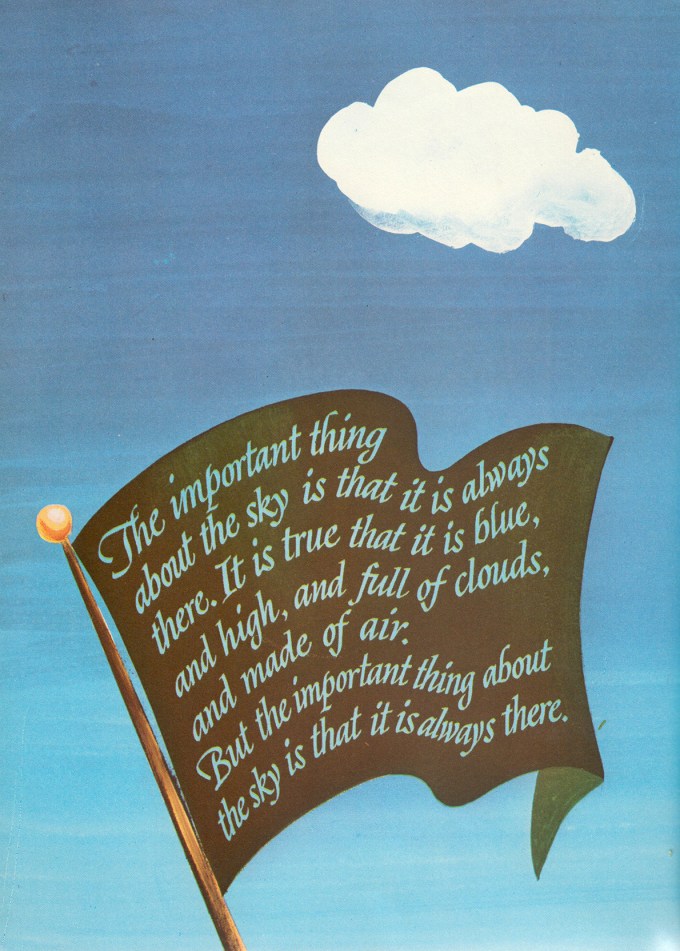 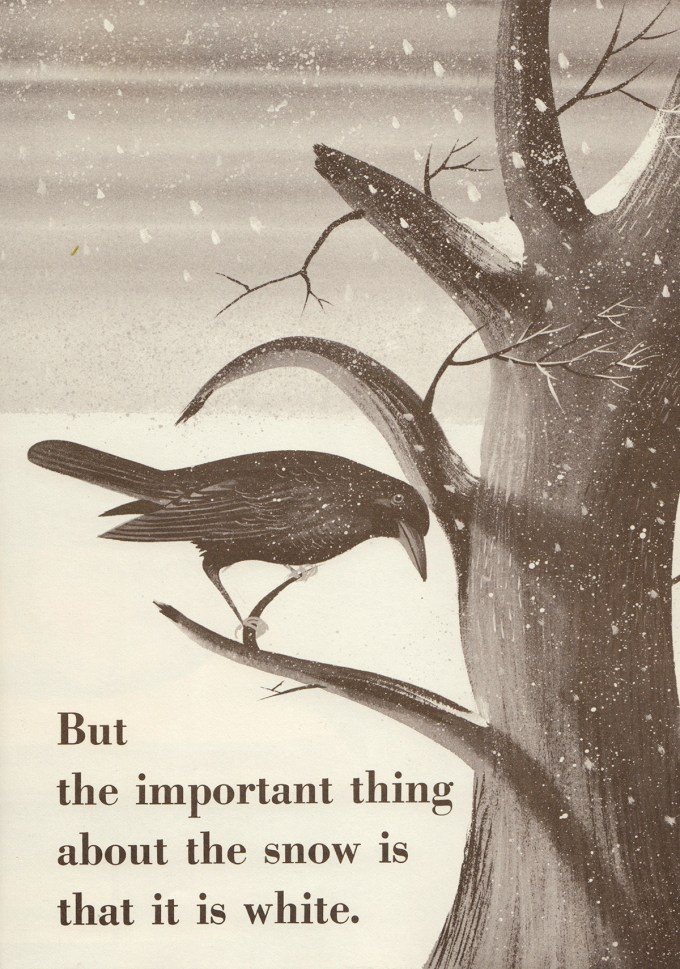 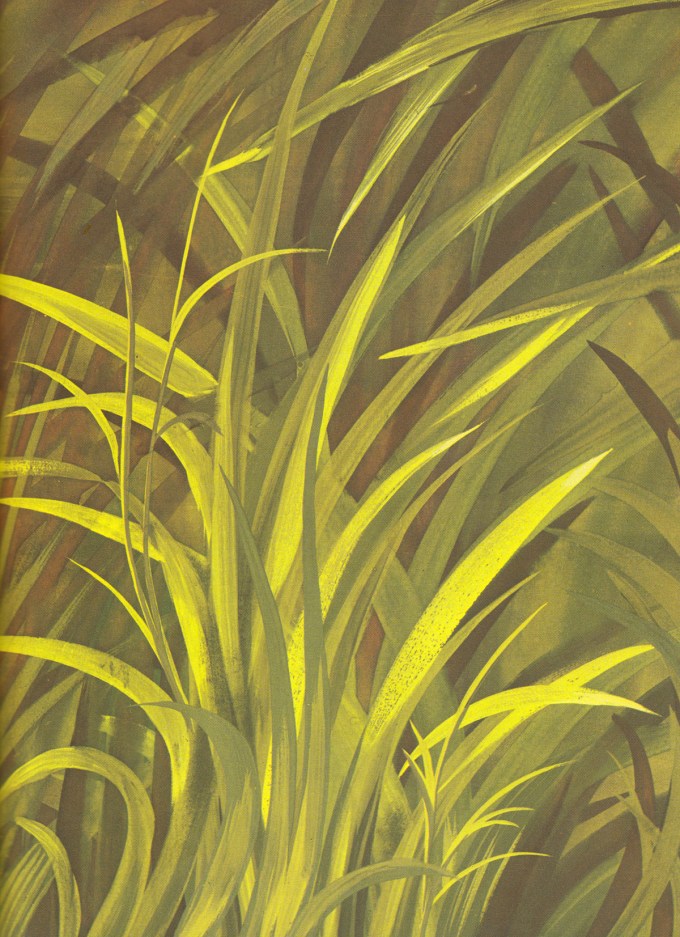 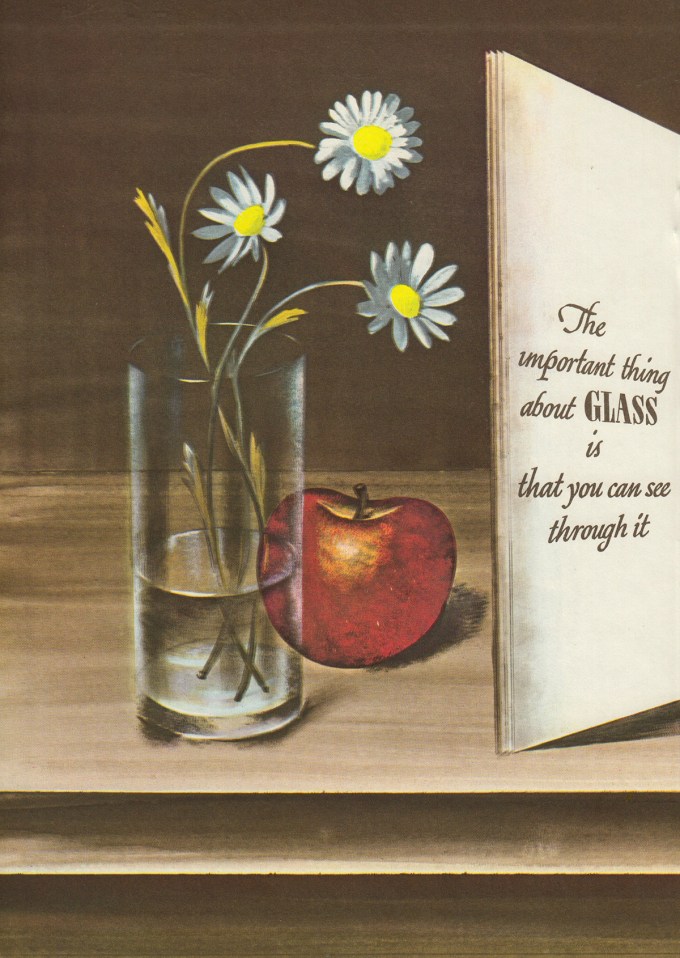 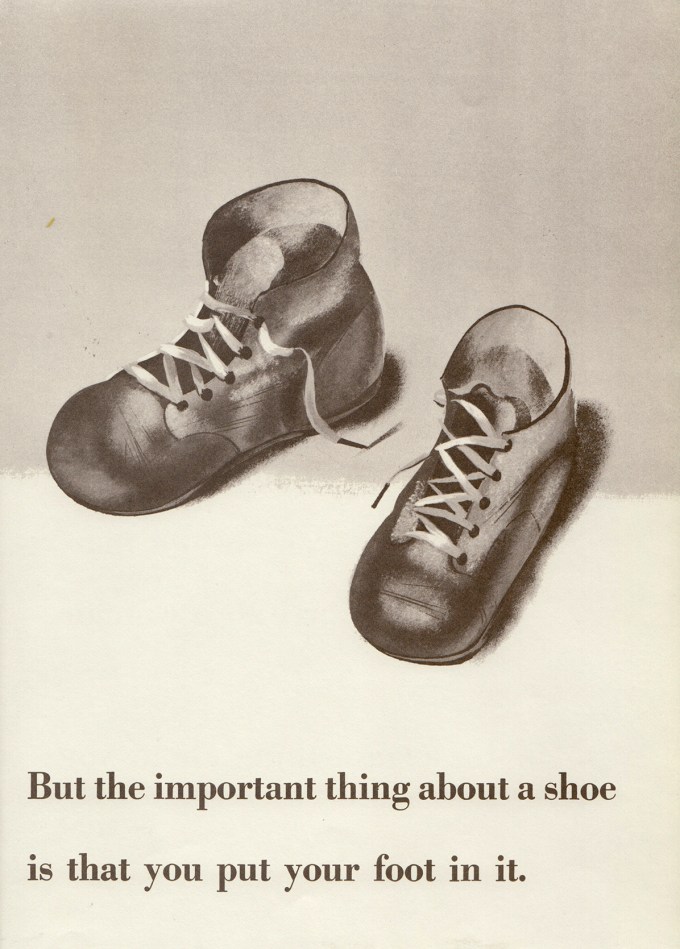 By the time Brown arrives at the sky, she chooses as its most important attribute not the standard attributes — its blueness, its airy expanse — but that “it is always there.”

Published two years after Brown’s iconic Goodnight Moon and illustrated by the prolific Leonard Weisgard (December 13, 1916–January 14, 2000) — who had reimagined Alice in Wonderland that same year and who would go on to illustrate Brown’s final books before her untimely death a couple of years later — the book unfolds as a spare, poetic catalogue of everyday things (spoons and daisies, the rain and the snow, the grass and the sky), each occupying a single spread, each following the same conceptual formula: