The calm deposition of the rings (rosy pink spring wood ending in the sudden dark band of summer wood) has gone on millimeter by millimeter for millennium after millennium — advancing ripples in the tide of time.
The Giant Sequoia’s grandeur is not only one of scale but also one of astonishing fertility. In the centuries-wide prime of its life, a single tree bears hundreds of thousands of cones, each blazing with hundreds of seeds — hundreds of potential majesties, most of which will perish in the gauntlet, giving life to colonies of ants and flocks of birds, giving testament to the elemental fact that all we know of life and all that remains of it are shoreless seeds and stardust.
Peattie considers the humble origins of that incomprehensible grandeur of space and time:

Crowning the Giant Sequoia — Sequoiadendron giganteum, also known as Mammoth-tree and California Bigtree Sierra Redwood — king in the kingdom of plants, Peattie captures its temporal majesty in his lyrical prose: 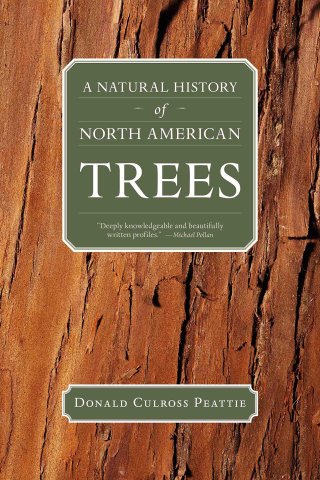 In that lovely way awe has of giving rise to wonder, then to wonderment, he adds:

If a seedling survives its first year, it may face the centuries with some confidence.

From the outset, this tiny sprouting seed must overcome myriad possible destructions — must “oppose the Worm” and “elude the Wind,” to borrow from Emily Dickinson’s timeless ode to the resilience of living things — in order to stake its tender root into the ground, to comb out the gossamer root hairs that draw water from the soil so that it may eventually shoot up its fragile, fierce sprout into the sky. From then on, the gauntlet of survival continues — cutworms below and wood ants above, finches and chipmunks and ever-greedy squirrels by the legion. With the quiet largeness of heart that pulsates through his prose, Peattie writes:

All this semieternal life, all these tons and tons of vegetation, come from a flaky seed so small that it takes three thousand of them to make up 1 ounce. The kernel is but 14 inches long, and inside it lies curled the embryonic monarch. There are commonly from 96 to 304 seeds to a cone, and the cones themselves are almost ridiculously small for so mammoth a tree. They do not mature till the end of the second season, and not until the end of the third, at the earliest, do they open their scales in dry weather and loose the seeds, which drift but a little way from the parent tree. Their method of transport is not only weak, but their viability is low; perhaps only half of the seeds have the vitality to sprout. And long before they do so, they are attacked, in the cone and out of it, by untold multitudes of squirrels and jays. Many do not fall upon suitable ground — mineral soil laid bare — but are lost in the duff of the forest floor. Of a million seeds on a tree in autumn, perhaps only one is destined to sprout when the snow-water and the sun of the late mountain spring touch it with quickening fingers.
So we might say that Bigtree lives long because fire and parasites seldom succeed in storming its well-defended citadel. We might say all this and more, yet there remains some quantum of the inexplicable, and in the end we are forced to admit that Sequoias come of a long-lived race — whatever that means — and so outlast the very races of man.
Why, out of a world of trees, do these live longest? Why is a Cottonwood decrepit at seventy-five years of age, why does the Oak live three hundred summers? And since it can do so, why does it not endure a thousand? How does the Giant Sequoia go on growing, without signs of senility, until literally blasted from the earth by a bolt from heaven, a consuming fire, a seismic landslide, or a charge of dynamite?

“A tree is a little bit of the future,” Wangari Maathai reflected as she set out to plant the million trees that won her the Nobel Peace Prize. But a tree is also an enchanted portal to the past — a fractal reach beyond living memory, beyond our human histories, into the “saeculum” of time.

Something awakens in us then — the magnified understanding of our own souls that Whitman saw in trees, the magnified understanding of the kinship between souls that Ursula K. Le Guin saw, the broadened portal to aliveness that Anna Botsford Comstock saw. We see, too, that this majestic and mysterious something is made of the selfsame stardust that makes us, and in that knowledge — in that splendid fact of science, which is the native poetry of reality — we find the plainly hidden treasure of the miraculous.

One answer may lie in the very sap, for that of the Bigtrees contains tannic acid, a chemical used in many fire extinguishers. Though fire will destroy the thin-barked young Sequoias, when bark has formed on the old specimens it may be a foot and more thick and practically like asbestos. The only way that fire can penetrate it is when inflammable material becomes piled against the base and, fanned to a blowtorch by the mountain wind, sears its way through to the wood. Even then fire seems never to consume a great old specimen, no matter how it devours its heart. And the high tannin content of the sap has the same healing action that tannic acid has on our flesh when we apply it to a burn. The repair of fire damage by a Bigtree is almost miraculous. It begins at once, and even if the wound is so wide that it would take a thousand years to cover it, the courageous vegetable goes about the business as if time were nothing to it.
Complement with Katherine May on how the science of trees illuminates the psychology of self-renewal, Hermann Hesse’s century-old love letter to trees, and Italian artist Bruno Munari’s mid-century existentialist tree-drawing exercise, then revisit the poetic science of chlorophyll.
That is what the poetic botanist Donald Culross Peattie (June 21, 1898–November 16, 1964) — who did for trees what Rachel Carson did for the sea — explores in his mid-century masterpieces on the natural and cultural history of trees, which began (like Carson’s prose poetry of science) on the pages of The Atlantic Monthly, grew into smaller separate books, and were eventually collected many tree-rings later in the single volume A Natural History of North American Trees (public library), illustrated with gorgeous woodcuts by the artist Paul Landacre, born in the final years of the nineteenth century in a long lineage of scientists.

[…]
Up into the light and air grows the princeling. The youthful leaves are soft, glaucous blue green; the bark is still smooth and gray with no hint of red about it. The stocky shape of childhood gives way to a conical outline, and the young tree stands clothed to the base in boughs that droop gracefully at the tip, of wood strong yet supple… In the second century of life, the trees begin to assume a “pole form” — that is, with strong central trunk clear of branches for a long way, and a high peaked crown. Gone now are the drooping limber boughs of youth. In their place great arms begin to appear, leaving the trunk at right angles and then, bending up as if at elbows, lift leafy hands in a gesture of hosanna. The soft blue green foliage is replaced by metallic green. The smooth gray cortex gives way to the richly red bark of maturity. At last it is furrowed thicker than the brow of Zeus, and in the gales its voice begins, these years (and hundreds of years), to take on the deepest tone in the world’s sylva.