After the board ruled, Trump laid into Facebook, as well as Twitter and Google, on a newly started blog.
Former President Donald Trump still can’t return to Facebook, and people are divided over whether that’s a good thing.
“I do not believe a public corporation has the authority to be judge and jury on a 1st amendment issue regardless of your rules and regulations. Your rules and regulations are simply too complex, wordy and to many, very boring,” wrote Hal Terrell.

Here is a brief sample of some of the comments submitted to the board:
“We have what’s called free speech, any attempt to squash this is wrong and unlawful. Facebook should not be given the choice to remove or block posts in any way as it stifles free speech. President Trump did nothing wrong,” wrote Jerry Johnston.

Stay in the know. Get the latest tech stories from CNET News every weekday.
Former President Trump called the social media companies that banned him a “total disgrace.”
“What Facebook, Twitter, and Google have done is a total disgrace and an embarrassment to our Country,” Trump wrote. “Free Speech has been taken away from the President of the United States because the Radical Left Lunatics are afraid of the truth, but the truth will come out anyway, bigger and stronger than ever before.”
CNET Daily News
Many members of the public agreed with Facebook’s suspension of Trump’s account, though many others found it wrong.
The oversight board also solicits public opinion on cases and received 9,666 responses, a volume so great it was forced to postpone its decision. By comparison, a previous case drew 12 comments.

“I fully support the ban that Facebook imposed on Trump’s account. It should continue indefinitely. It is crystal clear that Trump incited violence as a last resort to overturn the election, ignoring basic democratic rules,” wrote Denis Van Dam.
“Trump is a divisive, racist, traitor, and criminal. I support free speech but he incites violence and encourages domestic terrorism. Social media is not equipped to police his criminality,” said Gia Murray.
The oversight board that reviews Facebook’s content moderation decisions spoke out on its toughest case on Wednesday, weighing in on whether the social network was justified in banning former President Donald Trump. The case, unsurprisingly, provoked heated responses.
“I am disheartened by your lack of empathy for sides that you don’t agree with and only want is your interest. What a disgrace your company turned out to be,” wrote Jennifer Vogel.
He called the social media companies “corrupt” and said they would pay a “political price.”

A conservative organization submitted a statement on Trump’s behalf before the oversight board ruled in the case. The American Center for Law and Justice, as well as a page administrator, said, “It is stunningly clear that in [Trump’s] speech there was no call to insurrection, no incitement to violence, and no threat to public safety in any manner.” Trump’s posts “called for those present at and around the Capitol that day to be peaceful and law abiding, and to respect the police,” the center wrote.
The board, which includes journalists, lawyers and professors, found the social network was justified in suspending Trump from his Facebook and Instagram accounts amid concerns he could whip up more violence after the Capitol Hill riot on Jan. 6. But it asked Facebook to reexamine the open-ended nature of the suspension, which isn’t addressed by the social network’s rules. 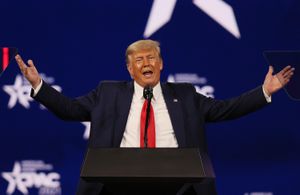