The Hebrew philosophical manuscript is not a mere container of text; more than anything else, it is a site of engagement. Aside from a few notable exceptions, scholarship of philosophy in Hebrew is still focused on a relatively small number of major thinkers and works. Manuscripts are often stripped of their particularity and employed only for the sake of producing critical editions. The story of the silent, nameless majority—who enabled philosophical activity by tirelessly editing, studying, translating, revising, and producing the material Hebrew philosophical corpus we have today— has yet to be told.
In the Middle Ages, philosophical activity undertaken in Hebrew was not conducted within an institutionalized environment. There were no universities, regulated curricula, or professors, but only small circles of scholars, most of whom we know nothing about. These scholars had to obtain their own copies of the works they wished to explore, sometimes even copying them themselves or with the help of others. Heavily involved in the production of the materials they were using, they often interfered with the texts they were studying, offering corrections, working notes, glosses, comparisons, and observations. As a result, the corpus of philosophical writings in Hebrew is incredibly diverse, and rarely is one copy similar to another. In this challenging landscape, the individual copy is our main entry point for understanding how Hebrew philosophy took place in the real world. 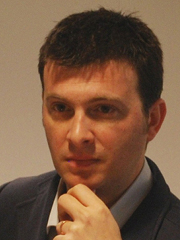 HEPMASITE is the first project to tackle the corpus of medieval Hebrew philosophical manuscripts in order to unravel the hidden history of Jewish philosophy enveloped within them. By employing narrative philology and a historiography of engagement—novel research methodologies that embrace textual particularity and fluidity—HEPMASITE will revolutionize the understanding of Jewish philosophy as it took place in the real world and as it was studied by actual people.
Here’s the abstract for Dr. Meyrav’s project, “Hebrew Philosophical Manuscripts as Sites of Engagement” (HEPMASITE):

The grant is a late addition to the previously announced list of “Starting Grants” awarded by the European Research Council (ERC). You can see the previous post announcing the other philosophical projects among the ERC Starting Grants winners here.

Yoav Meyrav, a research associate at the Maimonides Centre for Advanced Studies at the University of Hamburg, has been awarded a €1.5 million (approximately .58 million) grant for work on medieval Hebrew philosophical manuscripts.