While the artwork radiates the aesthetic of the Golden Age of Illustration that Arthur Rackham had ushered in fifteen years earlier with his revolutionary edition of Alice’s Adventures in Wonderland, it also radiates Lathrop’s singular sensibility — lines as consummate as Rackham’s, but with a greater and more dreamlike elegance of movement; stunning dramas in black and white, evocative of Aubrey Beardsley but unfolding with greater subtlety and tenderness.
In the final stretch of World War I, having earned a degree from the Pennsylvania Academy of Fine Arts in an era when under 4% of women graduated college, Dorothy Pulis Lathrop (April 16, 1891–December 30, 1980) was commissioned to illustrate a book of experimental imagist poems by a young American poet who would win the Pulitzer Prize two decades later. She never received her commission — the publisher went bankrupt. But her art captured the attentive imagination of the prolific English poet and novelist Walter de la Mare, who asked her to illustrate a fairy tale he had written a decade earlier. So began a lifelong friendship and Lathrop’s own prolific career. In her nine decades of life, she illustrated nearly forty books for children and wrote several, most of them celebrating her love of animals and the subtle beauties of the natural world. She become the first person to win the Caldecott Medal — the Nobel Prize of illustration.
In 1922, Lathrop illustrated De la Mare’s Down-Adown-Derry (public library | public domain) — a collection of fairy poems for children, to which she brought her uncommon imagination and her delicate, scrumptiously detailed pen.

Complement with Arthur Rackham’s stunning illustrations for The Tempest and a starker dreamscape in Harry Clarke’s illustrations for Poe’s Tales of Mystery and Imagination from the same era, then revisit another take on enchantment in the Nobel-winning Polish poet Wisława Szymborska’s superb short meditation on fairy tales and the importance of being scared. 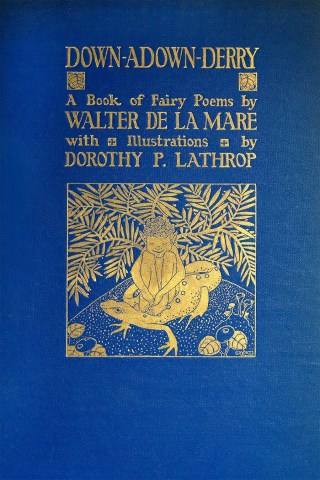