A generation after him, Maya Angelou observed that “you only are free when you realize you belong no place — you belong every place — no place at all.”
It has always been hard for me to understand myself, to know why I work and love and live. Yet it is fortunate that such matters find a way of caring for themselves. I came to Alaska because I love the North. I crave snow-topped mountains, dreary wastes, and the cruel Northern sea with its hard horizons at the edge of the world where infinite space begins. Here skies are clearer and deeper and, for the greater wonders they reveal, a thousand times more eloquent of the eternal mystery than those of softer lands.
Contemplating the existential pull beneath it all — the rippling, resonant why of our wanderlust — Kent adds:
“Man* is by Nature a migratory animal,” the elderly Frederick Douglass reflected in an 1887 speech about his global travels. “It does not appear that he was intended to dwell forever in any one locality. He is a born traveler.”

These are salutary words to read a century later, as our own world is only just shaking off its straitjacket of two-year terror and becoming wanderable again.

We are part and parcel of the big plan of things. We are simply instruments recording in different measure our particular portion of the infinite. And what we absorb of it makes for character, and what we give forth, for [our art].

Partway in time between Douglass and Angelou, the painter, printmaker, and philosopher Rockwell Kent (June 21, 1882–March 13, 1971) captured this vital interplay between freedom and belonging, between nature and human nature, in the preface to Wilderness (public library) — the exquisite record of the seven months he spent on a remote Alaskan island with his young son in the gloaming hour of the Spanish flu pandemic and the First World War, at the dawn of his artistic life.

In a new preface to his journals, penned in the final year of his life, Kent looks back on the wanderlust of his youth — the roaming restlessness that had shaped his spirit, the spirit from which his art sprang, the art that established him as one of the most celebrated creators of his time — and exhorts the generations of wanderers to come:

Wander where you will over all the world, from every valley seeing forever new hills calling you to climb them, from every mountain top farther peaks enticing you. Always the distant land looks fairest, till you are made at last a restless wanderer never reaching home — never — until you stand one day on the last peak on the border of the interminable sea, stopped by the finality of that. 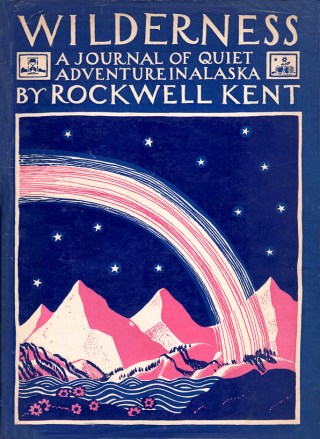 We each have a particular style of wanderlust, pulled by particular types of nature that best speak to our own — those places where we most freely lose ourselves and, in consequence, find ourselves. For some, they are the austere open space of blue skies and red canyons. For me, they are the mossy old-growth forests of New Zealand and the American Pacific Northwest. For Kent, it was the severe majesty of the Great North: