In ‘Life on the Edge’, we are exploring a key question in quantum biology. While time as we experience it only flows forwards, at the scale of quantum physics, time is reversible—with processes making just as much sense when viewed forward or backwards through time. However we also know that many complex processes are irreversible. How these irreversible processes emerge from smaller reversible building blocks is not fully understood, but may have implications for our understanding of life itself. 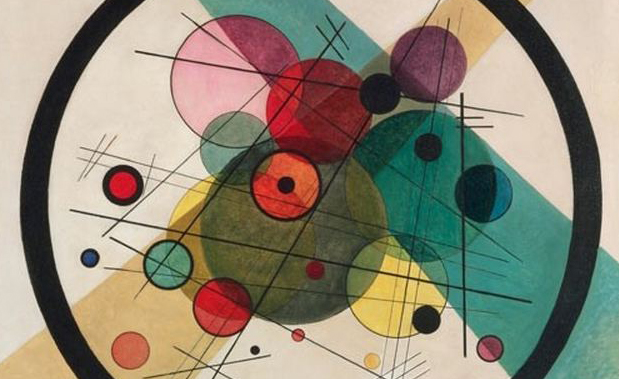 An interdisciplinary team of scientists and philosophers has won a million grant to support a project on time and quantum biology called “Life on the Edge.”

The team, led by Jim Al-Khalili and Andrea Rocco of Surrey University, includes, among others, philosophers Simon Saunders (Oxford), Karim Thébault (Bristol), Eddy Keming Chen (UCSD), scientists Clarice Aiello (UCLA), Paul Davies (Arizona State), and Chiara Marletto (Oxford).
The million grant is from the John Templeton Foundation.
Here’s their description of the project:
You can learn more about the project here.
[Wassily Kandinsky, “Circles in a Circle” (detail)]
The emerging field of quantum biology seeks to understand whether quantum mechanics plays a role in biological processes. There is growing evidence from recent research that phenomena such as photosynthesis, respiration, bird navigation—and even the way we think—are all influenced by quantum mechanics.
We will investigate the complex interrelationship between the nature of time and the distinct ways in which the passage of time and quantum physics manifest in inanimate objects compared to living organisms. Expanding the theoretical and philosophical frameworks used to understand the ‘arrow of time’ and reversibility, the project will encompass three theoretical investigations, an experimental approach using live cells, and a philosophical exploration of the deeper meanings of time.