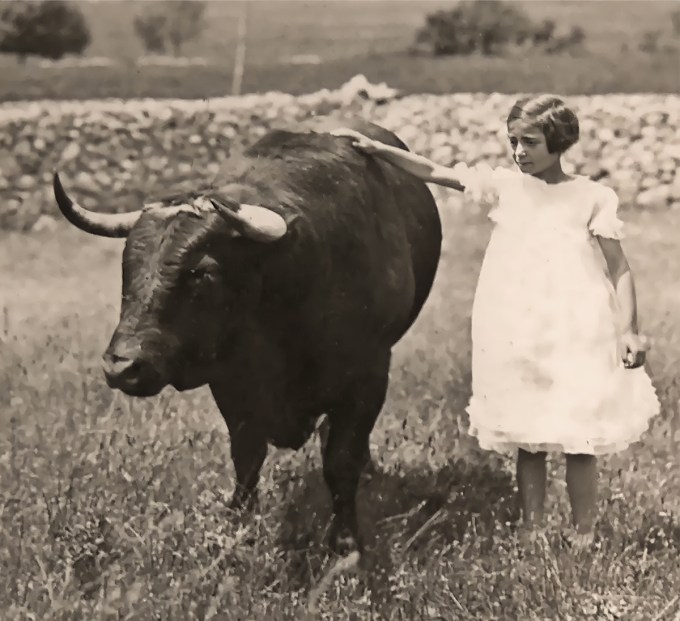 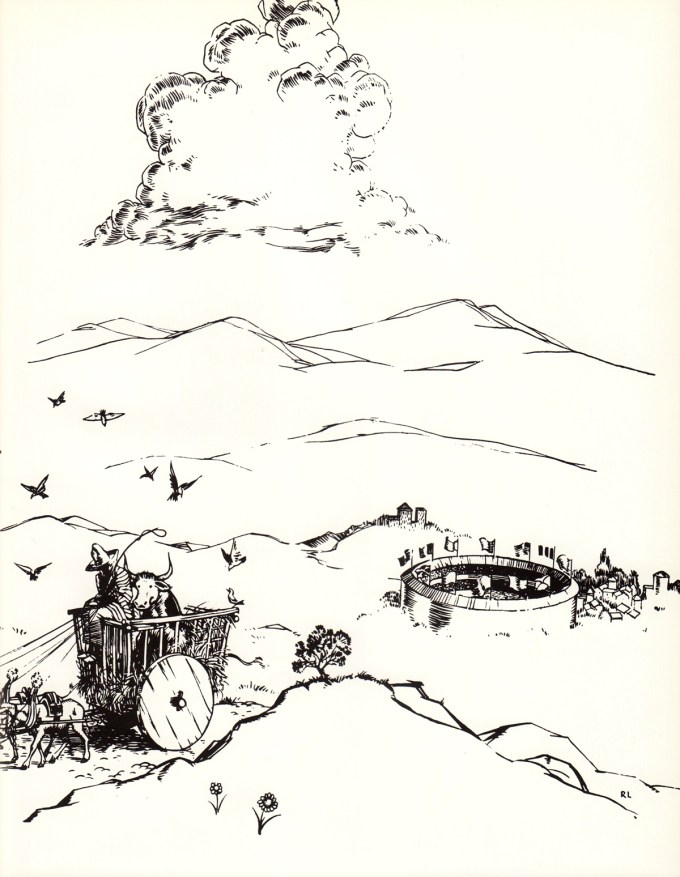 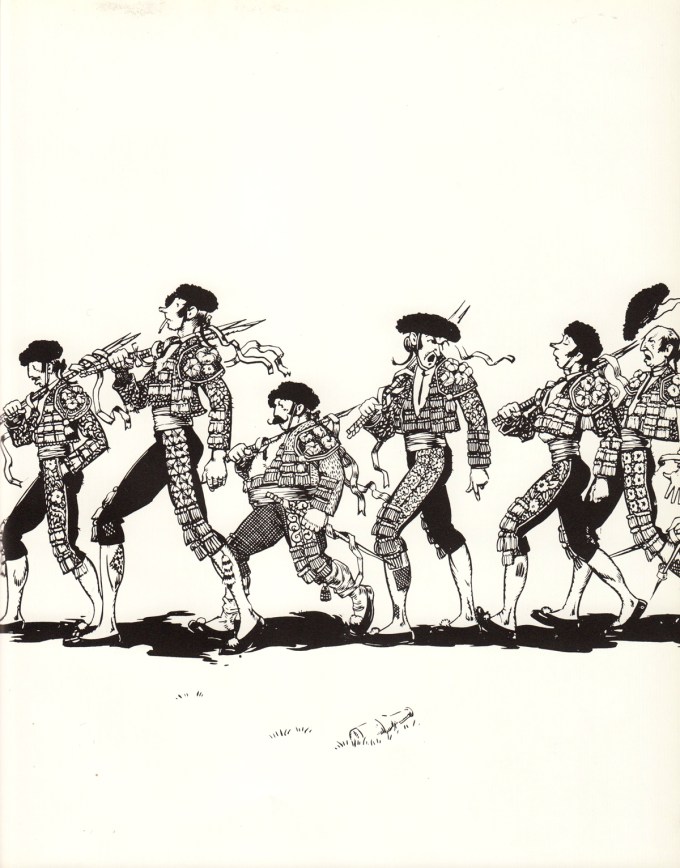 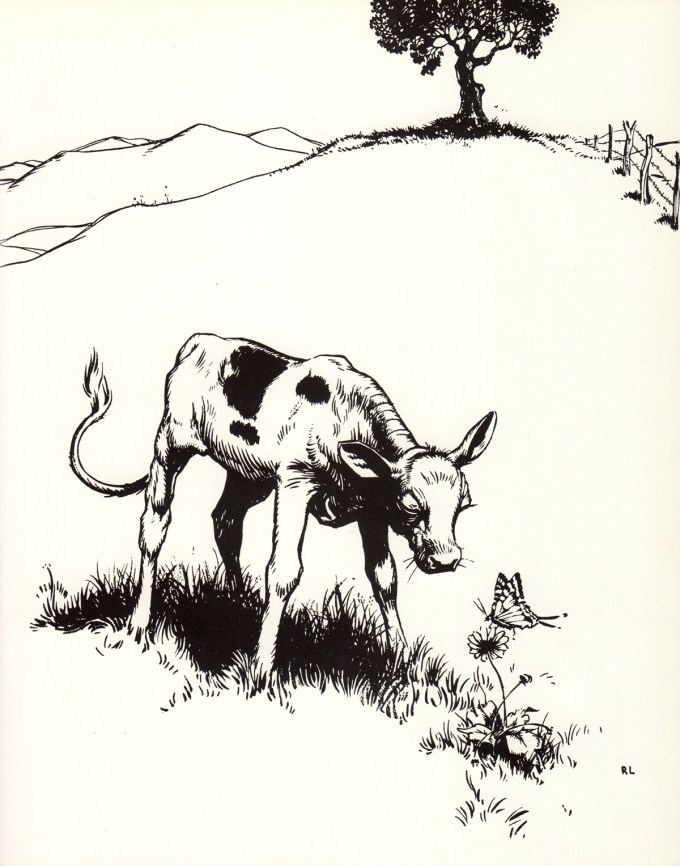 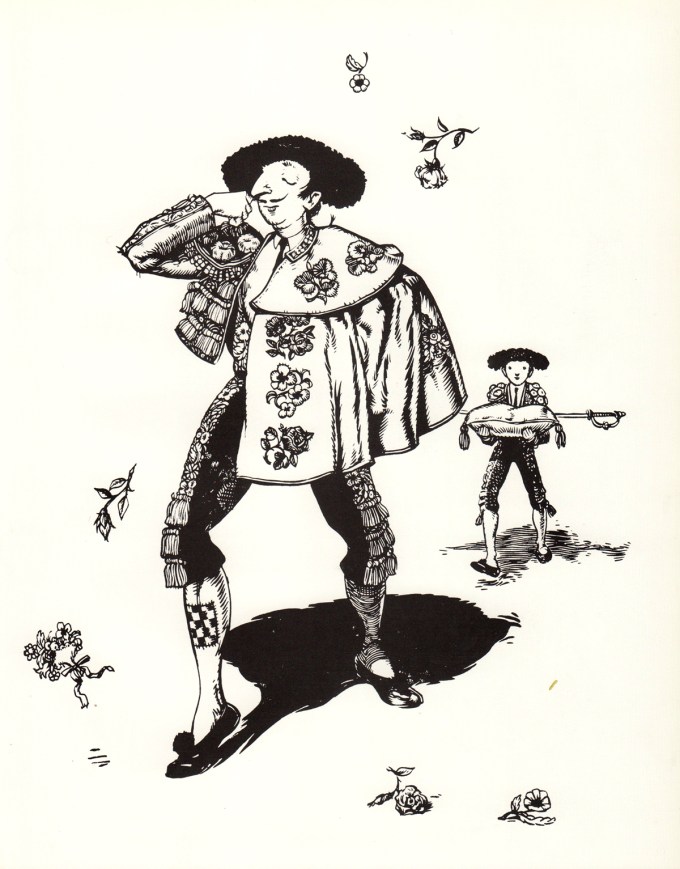 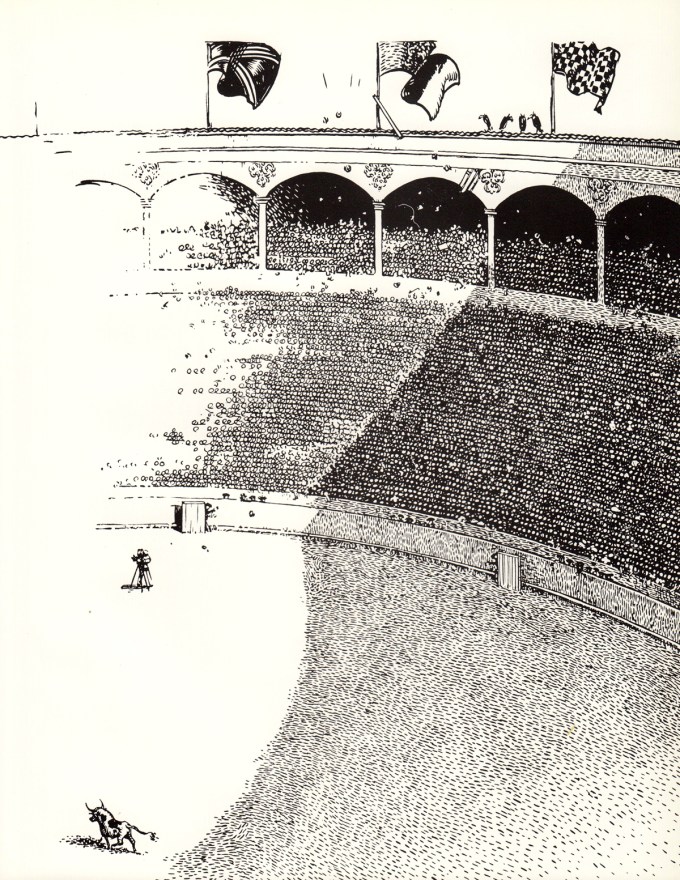 Civilón was taken from his bucolic paradise, carted to Barcelona, and released into the arena packed with thousands of scintillated spectators who had come to see what would happen to the famous furred pacifist under the bloodthirsty threat they took for entertainment. 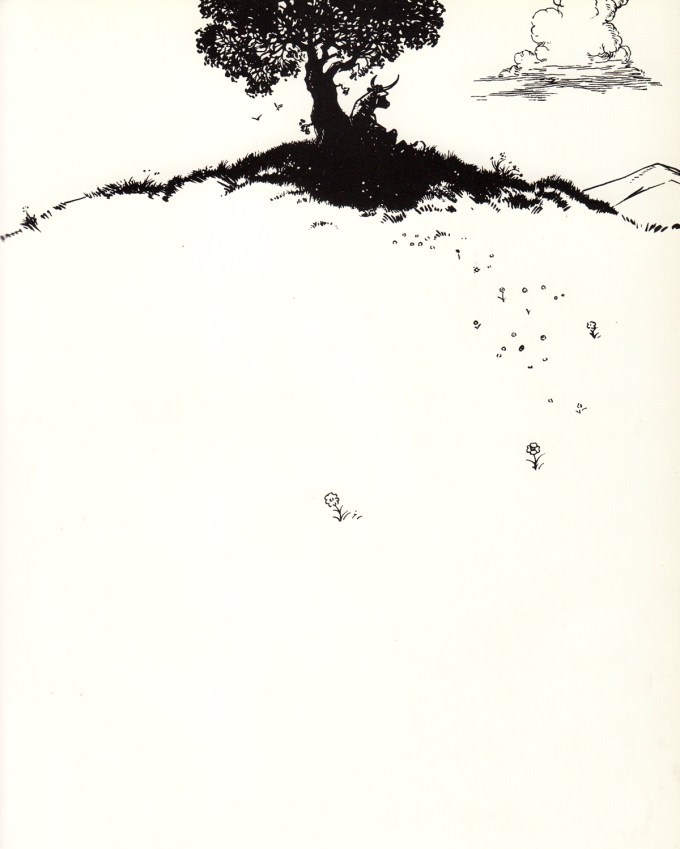 It was such a powerful moment — the people acting as a people, acting human — that the president waved his orange handkerchief, granting the pardon. Civilón, mobbed by photographers and fans, was sent to the city stables to recover before being sent home to his peaceful pasture.
“And for all I know,” Munro Leaf writes in the final pages, “he is sitting there still, under his favorite cork tree, smelling the flowers just quietly.” 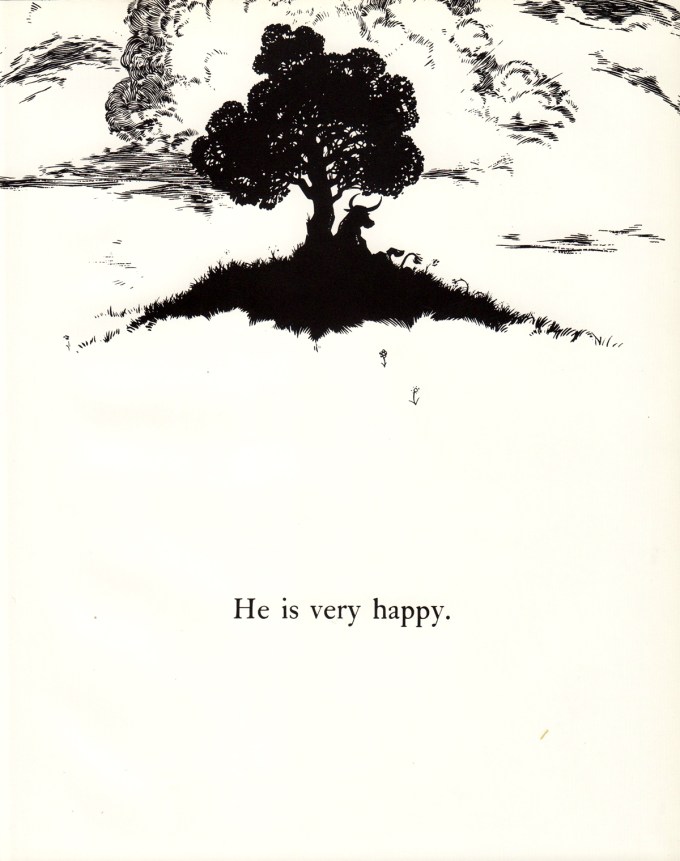 The day he is taken to the bull ring, he models for the violence-hungry crowd — as he would for millions of readers in the century since — a saner way of being in an insane world.
Like Winnie-the-Pooh — a book published a decade earlier, inspired by a real-life rescue baby bear its author had visited with his son at the London Zoo — The Story of Ferdinand has its roots in the true story of a real bull in the Spanish countryside.
Six weeks before my grandmother was born on the other side of the world, the Brooklyn Daily Eagle announced the publication of a book described only as “a children’s story of a bull,” sold for .
The spectators were so moved by this a supreme manifestation of the bull’s natural nobility, known as nobleza, that when the famous matador strutted into the arena with his sword to deliver the barbaric finale of the spectacle, a woman cried out for un indulto — that rare “indulgence,” or pardon, by which a bull is spared death in recognition of his bravery and nobility. Other voices immediately joined her. The crowd rose to its feet as one and began chanting its unified demand for indulto.
Don Juan Cobaleda had been a rancher all his life, but he had never seen what he saw one morning in the mid-1930s: Carmelita — his seven-year-old daughter — was petting his blackest bull, bred as a toro bravo for bullfighting; the beast was eating flowers out of the little girl’s hand.
Wilbur Monroe Leaf, better known as Munro Leaf (December 4, 1905–December 21, 1976), wrote the story in the first year of his thirties, on a yellow legal pad, in half an hour, as a creative prompt for his friend Robert Lawson (October 4, 1892–May 27, 1957) — he wanted to give the illustrator something to tickle his artistic imagination out of a lull.
Their collaborative creation went on to become one of the most beloved children’s books of all time — cherished by Eleanor Roosevelt and Gandhi, adapted by Disney into an Oscar-winning film, translated into sixty languages, continuously in print for nearly a century. 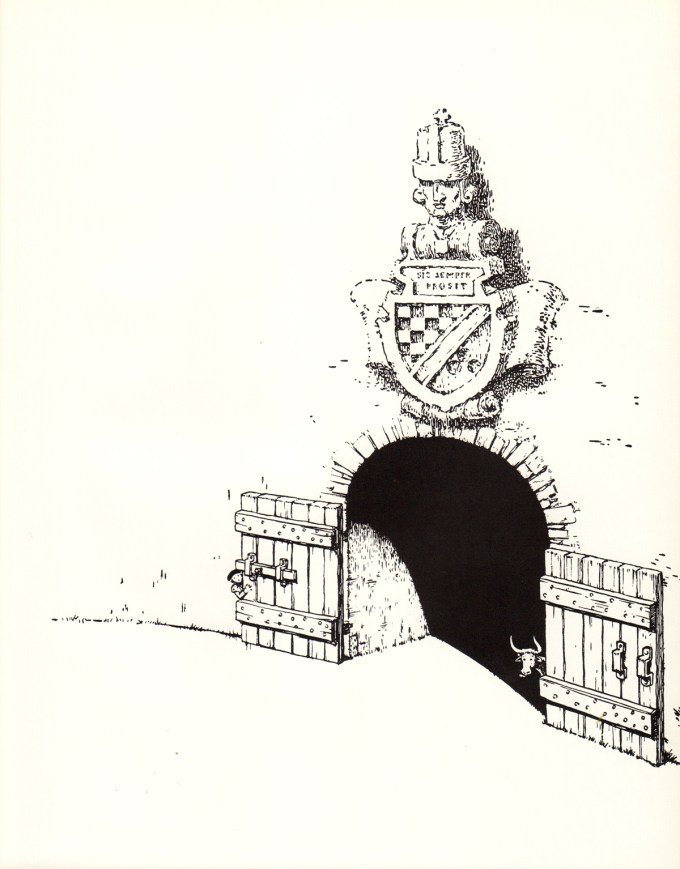 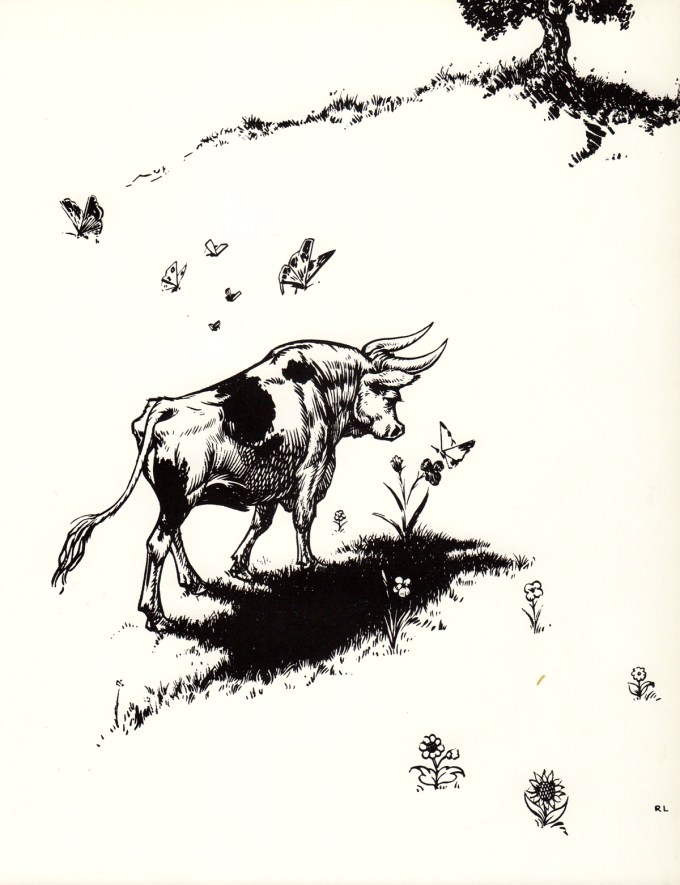 In the story’s alternate universe, the peaceful bull’s peacefulness does save his life — he makes it home unharmed, modeling a different way of being for a savage world, embodying the power of personal resistance that Eleanor Roosevelt knew furnishes the cumulative force of cultural change.
The Story of Ferdinand was published three months after the Spanish Civil War began. The great Spanish cellist Pablo Casals would live through it to emerge with his impassioned insistence on our shared duty “to make this world worthy of its children.” 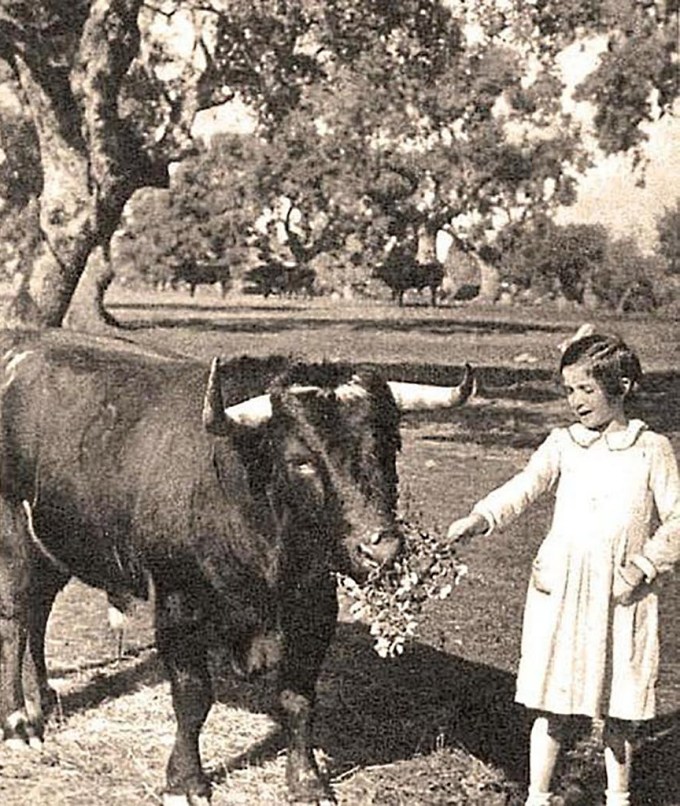 And so he does. 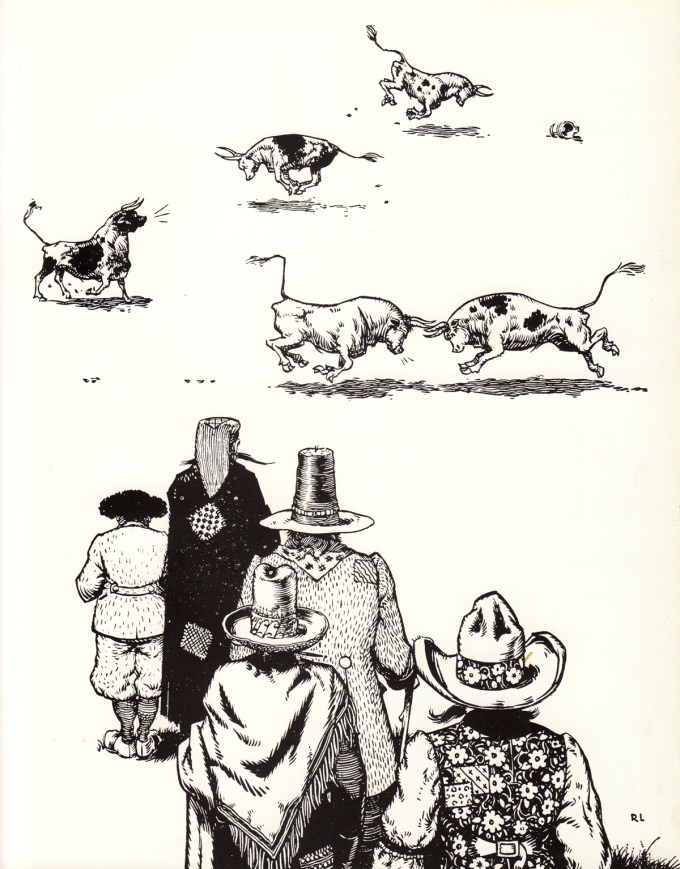 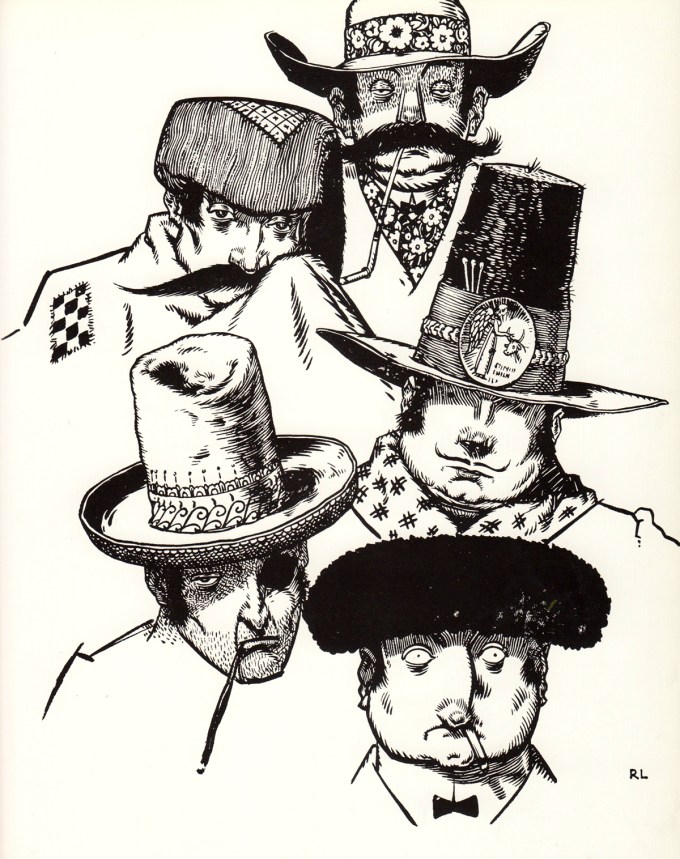 “The Adventure of Civilón in Barcelona’s Bull Plaza,” announced the headline. “The Women Saved Him,” declared the subtitle. 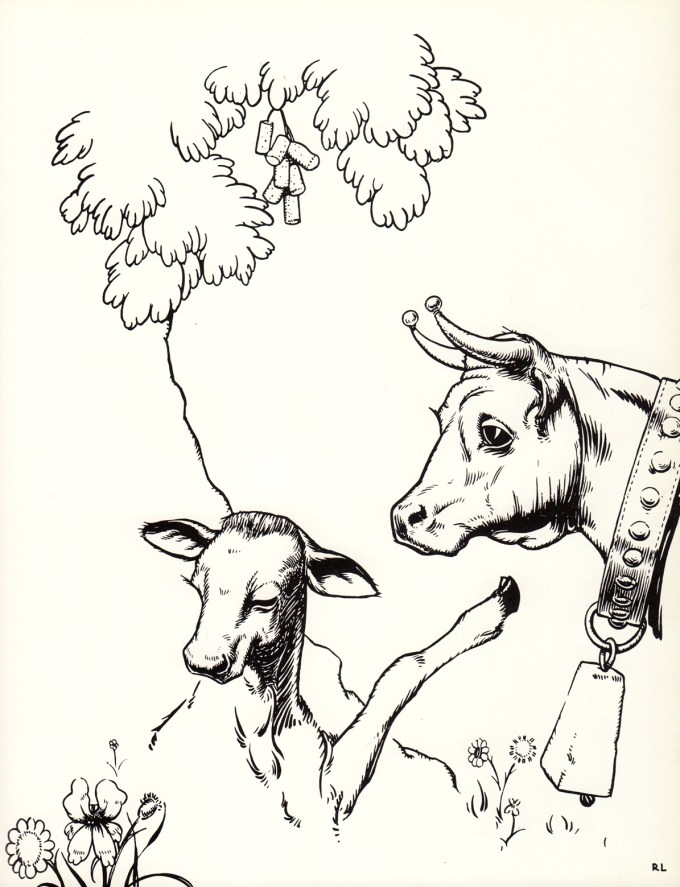 Ferdinand grows up to remain entirely himself.
Soon, other children were flocking to the farm with bouquets of wildflowers and succulent grass for Civilón to eat from their hands as photographs of him populated the human interest sections of Spanish newspapers.
Like The Little Prince — a book published eight years later and inspired by its author’s wartime experience in the desert — The Story of Ferdinand has its roots in the lived experience of its creators. Both Leaf and Lawson had seen the world come undone in its first global war. When drafted, Lawson had joined the U.S. Army’s first camouflage unit. As the young artist Franz Marc was painting his extraordinary hill-wide canvases across the French countryside in another army’s camouflage unit, Lawson was putting on plays and music shows for French children. We have always survived history’s dark patches by making our own light and meeting brutality with beauty. 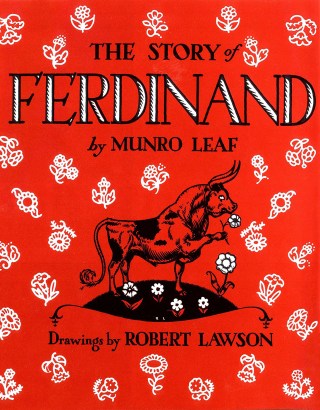 In The Story of Ferdinand (public library), a gentle-souled young misfit sits out the perpetual head-butting by which his peers hone their bull-skills, choosing instead to smell the flowers under his favorite cork tree in solitude. His mother, at first worried about his bullness, recognizes her son’s difference and trusts that he would find his way.
It is a “children’s book” in the same way that The Little Prince is — a miniature work of philosophy, delivered with simplicity and warmth, radiating immense and eternal ideas about the meaning of human life. Like a great poem, it can be read many different ways and taken to mean many different things — a story about otherness that can speak to modern-termed styles of otherness like queerness and neurodivergence; a story about the quiet power of nonconformity; a story about the world-shifting power of personal example.
In mid-July, with Civilón still in Barcelona, Franco’s militiamen burst through the city gates. In their looting and ransacking, they broke into the stables, killed Civilón, butchered him and ate him for breakfast before the resistance drove them away that evening. The July day Civilón was murdered is the day the Spanish Civil War began in full force, maiming the country for three years and stirring in Europe’s bosom the violent passions that soon erupted into the next World War.