Diego Luna, in particular, fails to convince as an icy assassin, but that could also be because his soulful eyes are just soooo dreamy.
Faithfully brushing up against the Star Wars saga, Rogue One nonetheless takes us places in the universe we’ve never seen before. It may not have the joyous spark of adventure as the classic films, but it’s still a thrilling glimpse into the street life of a galaxy far, far away.

Fortunately, Rogue One avoids the tacked-on ending of Force Awakens and it’s in the final third that the new spin-off bursts into life like a Star Destroyer exploding into flaming carnage. The ending battle sees director Gareth Edwards diving headfirst into the Star Wars toy box, pitting lumbering walkers and swooping X-wings against each other in no-expense-spared combat. And there’s a climactic sequence that may be one of the best moments in any of the Star Wars films.
When Obi-Wan Kenobi brought Luke Skywalker to a place called Mos Eisley a long time ago in a galaxy far, far away, he said, “You’ll never find a more wretched hive of scum and villainy.” Now playing: Watch this: ‘Rogue One’ review: Street-level Star Wars

1:55
Despite being a concoction of motion capture and CGI, Alan Tudyk’s droid K-2SO is one of the most lifelike of the characters. That’s a compliment to his hilarious performance, but it also shows how the rest of the talented cast is left short-changed by the script. The film sets up a range of interesting characters — Whitaker’s extremist rebel, for example, or Ahmed’s guilt-ridden Imperial pilot — but doesn’t fully commit to its intriguing ideas.
And as interesting as the individual characters are, they don’t spark the kind of chemistry that between Rey, Finn and Poe carried us through the far sillier Force Awakens.
Technically, it’s a prequel — slotting into the saga in the wind-up to the 1977 original and therefore stuffed with references for fans to enjoy. But from barren labor camps to occupied desert cities to minor military outposts, the focus stays on bit-part players who drive the action when the big names are off addressing galactic government, wooing royalty and practising their lightsaber swing.
Felicity Jones leads the ensemble cast as Jyn Erso, a petty criminal drawn into the Rebellion against the evil Galactic Empire. She’s surrounded by a dust-streaked crew of small-time rogues and renegades played by Forest Whitaker, Riz Ahmed, Jiang Wen and Mads Mikkelsen. Among them, Donnie Yen is the stand-out as a blind monk who’s a dab hand at roughing up Stormtroopers even without a lightsaber.
But Rogue One: A Star Wars Story finds a few. And while the heroes of the original Star Wars hopped in the Millennium Falcon to leave the wretched scum behind and blast off into galaxy-spanning space opera adventure, there’s always something of the street about Rogue One.
Rogue One is the first spin-off from the main Star Wars saga. It expands the story beyond the epic films we’ve seen so far, revealing what it’s like to live in the Star Wars universe when your name isn’t Skywalker.
Speaking of villains, Rogue One repeats a mistake of last year’s The Force Awakens, leaning a little too hard on CGI to bring one of the main villains to life.

The shadow of the Dark Side looms over the film with appearances from familiar villains, but Rogue One is in many ways a look at the banality of evil, of the workaday compromise and low-level corruption that keeps the cogs of galactic tyranny grinding.

On the opposite side of the Force is the sneering Director Krennic, played with pantomime relish by Ben Mendelsohn. Like the heroes, Krennic is really a minor character in the Star Wars saga, a footnote in galactic history. He’s a petty bureaucrat, an ambitious opportunist blindly serving men who take advantage of his short-sighted ego to show what evil really is.
Back in 2016, Lucasfilm released the first Star Wars movie that wasn’t part of the Skywalker saga — Rogue One: A Star Wars Story. One of the films stars, Diego Luna, is about to get his own show in Andor, streaming on Disney Plus from Sep. 21. So Disney is re-releasing Rogue One in IMAX theaters on Aug. 26, with a sneak peek at Andor footage. To celebrate, here’s our original review of Rogue One from 2016. 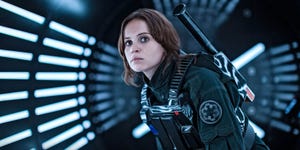