[…]
“Envy those who see beauty in everything in the world,” artist Egon Schiele wrote in contemplating why visionaries tend to come from the minority. Artists are so often those whom society paints as other by some hue of identity and belonging, and yet they are also the ones who, in seeing how and what most people don’t see, teach us what it takes to be ourselves, what it feels like to be someone other than ourselves, and what it means to be a human being.
No two human beings ever experience two sensations, experiences, feelings, or thoughts identically.
We are human and we “understand” beauty.
Haring explores this question with uncommon thoughtfulness and tenderness throughout his diary, posthumously published as Keith Haring Journals (public library) — the wondrous cathedral of creative vitality rising at the intersection of the intimate and the universal that gave us Haring’s impassioned insistence on the love of life even in the face of death.

In the early autumn of 1978, having just left Pittsburgh to begin his brave new life as an artist in New York City, the twenty-year-old Haring finds himself sitting in Washington Square Park — a microcosm of the city’s vibrant polyphony of life. He takes out his journal and begins composing a long stream-of-consciousness meditation on art and life, at the heart of which is the sentiment that would come to define his creative ethos:
Haring would devote the remainder of his short life to using art as a celebration of difference and an empathic bridge for coming as close as we can ever come to the way a consciousness other than our own is experiencing reality.

“Art”… is at the very basis of human existence. The need to separate ourselves and connect ourselves to our environment (world) is a primary need of all human beings.
We make art with everything we are, the doom and the glory of it. We make art to know ourselves, to locate ourselves in the web of being, to make ourselves more alive. We make art that, at its best, helps other people locate themselves and live.
Art becomes the way we define our existence as human beings. This has a perverse air to it, I admit. The very idea that we are so different from other beings (animals) and things (rocks, trees, air, water) is, I think, a great misconception, but if understood is not necessarily evil. We know that “humans” determine the future of this planet. We have the power to destroy and create. We, after all is said and done, are the perpetrators of the destruction of the Earth we inhabit. No matter how slowly this destruction is occurring, no matter how “natural” this de-composition is, we are the harborers of this change.

All artists know this and feel this, consciously or not, but few have contemplated that knowledge more deeply and articulated it more beautifully than Keith Haring (May 4, 1958–February 16, 1990), whose largehearted art has touched countless lives and helped generations of humans — this one included — live.

I am interested in making art to be experienced and explored by as many individuals as possible with as many different individual ideas about the given piece with no final meaning attached. The viewer creates the reality, the meaning, the conception of the piece. I am merely a middleman trying to bring ideas together. 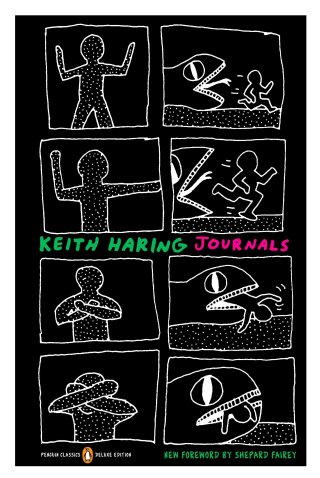 In an entry penned years later, not yet knowing his own consciousness is soon to meet its untimely end, he revisits the question of the ultimate function of art in human life — life inextricable from the larger web of life, the destructive unweaving of which had colored Haring’s childhood as the modern environmental movement was coming awake:

Iris Murdoch found in this the ultimate evidence of why art is essential for democracy; in it, James Baldwin recognized the titanic dual task of the artist as society’s essential destabilizing force and its “emotional or spiritual historian,” whose job it is “to make you realize the doom and glory of knowing who you are and what you are.”

And yet even against this backdrop, Haring defies the easy defeatism of painting our species and our civilization as purely evil, of classing human nature as an antagonist of nature rather than its function and functionary, just as replete with the capacity for destruction as with the capacity for beauty — like nature itself. What dignifies us, what redeems us, what saves us from ourselves, is the animating impulse of art. He writes:

Complement with Virginia Woolf’s exquisite epiphany about what it means to be an artist and the childhood encounter in which Pablo Neruda found the ultimate metaphor for why we make art, then revisit Drawing on Walls — poet Matthew Burgess and muralist Josh Cochran’s picture-book biography of Haring, inspired by his altogether ravishing journals.