Constantly this way and that
The flowering branch flails in the wind,
Constantly up and down
My heart flails like a child
Between bright days and dark,
Between wanting and renouncing.
Until the flowers have blown away
And the branch is covered in fruit;
Until the heart, sated with childhood,
Has its rest
And confesses: it was full of pleasure, not for nothing,
This restless game of life.
It always delighted and impressed me how stubbornly my little beech held on to its leaves. When everything else was long since bare, it still stood clad in its withered leaves — through December, January, February; storms tore at it, snow fell on it and dripped off again, and the dry leaves, at first dark brown, grew ever paler, thinner, silkier, but still the tree would not let them go, they were needed to shield the young buds. Then at some point or another every spring — and every time it was later than you expected — the tree would one day have changed. It would have lost its old foliage and instead put out tender new buds dabbed with moisture. This time, I was witness to the transformation. It was an afternoon hour around mid-April, soon after the rain had made the landscape fresh and green; I had still not heard the cuckoo that year, not seen any daffodils in the meadow. Only a few days earlier I had stood there in a hard north wind, shivering, raising my collar, and watched with amazement as the beech stood indifferent in the wrenching wind, dropping barely a leaf. Tough and brave, hard and stubborn, it kept hold of its old bleached leaves.
After the heroism of editing the first-ever complete edition of Hesse’s writings writings, scholar Volker Michels has culled the finest sylvan musings from this immense body of work and curated thirty of Hesse’s own drawings to illustrate them in the slender gem of a book Trees: An Anthology of Writings and Paintings (public library).

What had this surprising and touching performance revealed to me? Was it death: the easy, willingly undergone death of the winter leaves? Was it life: the urgently striving, celebratory youth of the buds making space for themselves with a suddenly roused will? Was the performance sad or cheering? Was it a sign that I, an old man, should let myself flutter and fall as well, a warning that I might be taking up space needed by the younger and stronger? Or was it a call to hold on, like the beech leaves — to stay on my feet and brace myself and defend myself as tenaciously and as long as I could, because then, at the right moment, my farewell would be easy, serene, and joyful? No, like everything we see it was the great and eternal made visible: a confluence of opposites, their fusing together in the fire of reality. It meant nothing, was a call to nothing; or, rather, it meant everything — it meant the mystery of existence and it was beautiful, it was happiness and meaning, a gift and a discovery for anyone who saw it, like an earful of Bach or an eyeful of Cézanne. These names and these interpretations were not part of the experience, they came later: the experience itself was nothing but appearance, miracle, mystery, as beautiful as it was serious, as fair and propitious as it was unrelenting and merciless.
FLOWERING BRANCH

The [willow’s] long delicate silky tired branches hung so dense and deep all around that being inside them was to be in a tent or temple, where despite the eternal shade and twilight a muted constant warmth brooded.
To be human is to see in the rest of nature not what it is but what we are. If we are lucky enough, if we are wakeful enough, we might see both — but never only reality unselved. Because we are the seeing, we are also the seen — this is the price of consciousness. In another piece penned in another spring nearly half a century and a Nobel Prize later, in the winter of his life, Hesse sees in trees an analogue for his own experience of the final life-stage, looks to them for a model of the stubborn dignity he yearns for — we all yearn for — in facing death.
Complement the cover-to-cover delight that is Trees: An Anthology of Writings and Paintings with some defiantly delightful photographs of women in trees across Hesse’s homeland in the final years of his life, his compatriot Paul Klee on how an artist is like a tree, their no less visionary yet forgotten American contemporary Anna Botsford Comstock on winter trees as a portal to aliveness, and the Harlem Renaissance prodigy Helene Johnson’s poem “Trees at Night” read by Rebecca Solnit, then revisit Hesse on the wisdom of the inner voice and solitude, the value of hardship, and the courage to be yourself.

And yet the loss only makes him love the little tree more.

[Now] the people whose grandfathers had planted the plane trees in ramrod-straight lines, and pruned and shaped them with judgment and discretion, now visited those trees with their own children and were happy that the long period of desolation had turned the allées into a forest, where sun and wind could linger and birds could sing and people could indulge in their thoughts and dreams and desires.

And then he realizes that he is only rediscovering a truth he had discovered long ago, in one the poems he penned in the summer of life:

He describes a beech sapling that had somehow planted itself in the thorny hedge bordering his garden some years earlier — at first “a little shrub from a seed flown over from the woods,” intruding on his ideas about garden design, now a thriving young tree that brings him immense delight — delight now bittersweet as he realizes that the “old mighty beech” from which the seed most likely flew, his most beloved tree in the nearby forest, had been cut down.Heartache drips from his words — a heartache Thoreau too knew, and I have known, in seeing a beloved tree cut down — as he reflects on the fate of the mother-tree: “Massive segments of its trunk, sawn apart, still lie there heavy and oversized like rubble from an ancient column.”

“Whoever has learned how to listen to trees,” Hermann Hesse (July 2, 1877–August 9, 1962) wrote in what remains one of humanity’s most beautiful love letters to trees, “no longer wants to be a tree. He* wants to be nothing except what he is. That is home. That is happiness.”

An epoch before we understood the poetic science of why leaves change color and fall — itself a metaphor for how every loss reveals what we are made of — Hesse writes:
Intuiting what we now know — that trees are Earth’s emissaries of immortality, and that their wintering is our blueprint of resilience — he sees in the little tree the same lens on the meaning of life that Rachel Carson saw in the ocean, and adds:
But this century-old classic, part meditation and part manifesto, is far from Hesse’s only contribution to the reliquary of our species’ tender kinship with trees — those “slim sentinels” watching over our existence, recalibrating our sense of time, fomenting our richest metaphors and our finest poems, speaking deeply to every deep-thinking, deep-feeling person and enchanting every noticer (which is the other word for artist). Trees strew Hesse’s novels and essays, his letters and diaries, his poems and paintings — all that survives of a life so clearly and mirthfully animated by them, from his Black Forest childhood to the Swiss mountain village of his old age.

From a distance [the copper] looked dark brown, almost black. But when you got closer, or stood under it and looked up, all the leaves on the outer branches, penetrated by the sunlight, burned with a low warm purple fire shining with a solemnly subdued glow like a church’s stained-glass windows.
It is through this portal of beauty that Hesse enters a realm of elemental truth that would take science two more human generations to catch up to. Nearly a century before Canadian forester Suzanne Simard’s epoch-making discovery of how trees communicate demonstrated the ecological reality beneath the poetic truth of Hesse’s existential reckoning, he considers our ambivalent relationship with nature — its punitive history and its possible future — through the lens of the urban park: 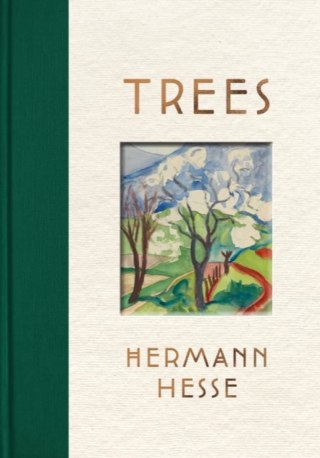 Long before the modern concept of rewilding, he adds:

At one time, the regularly laid out pleasure garden had been a rigorous work of art. But a time came when people grew tired of arduous waiting and tending and pruning, and no one cared about laboriously planted grounds, and the trees were left to fend for themselves. They had struck up friendships with one another, they had forgotten their artificially isolated roles, they had remembered in their crisis their old forest homeland, leaned on one another, flung their arms around one another for support. They had covered the paths straight as arrows with thick foliage and drawn those paths to themselves, with their long, grasping roots, transforming them into nourishing forest floor; their crowns had clasped one another and grown tightly intertwined; and they saw an eagerly upward-striving population of new trees grow under their protection, filling the emptiness with smoother trunks and lighter-colored leaves, conquering the fallow soil, making the earth black and soft and rich with their shade and fallen leaves, so that mosses and grass could now thrive more easily too, and little shrubs.
And now, today, as I broke pieces of wood by my fire in the gentle calm warm air, I saw it happen: a soft breeze blew up, just a breath really, and the leaves saved for so long simply drifted off, by the hundreds and thousands — noiselessly, easily, willingly, tired from their long perseverance, tired of their stubbornness and fortitude. What had resisted and endured for five or six months now succumbed to a puff of air, a nothing, because the time had come and their furious persistence was no longer needed. Away they flew and fluttered, smiling, without a struggle, ready. The tiny wind was much too weak to carry the little leaves far no matter how light and thin they were, so they drizzled down like a light rain and covered the path and the grass at the foot of the little tree, which was now showing a few buds already broken open and green.

In a piece penned in the spring of 1905 — the year Hesse formulated his timeless prescription for living with presence — Hesse recounts a visit to a long narrow park in the city, full of sunny lawns and prim flower beds. Standing apart from the copse of young fir trees, apart from the “stately elm, maple, and plane trees,” he notices two trees “rising in the warm and cheerful freedom of the grass, conspicuous and alone” — a weeping willow and a “mighty copper,” both of which he serenades with the full force of his luscious prose. He writes of the willow: