beyond
the globby flap
of blame
and past
the mono-sulk
of pain.
“Love your heart. For this is the prize,” Toni Morrison wrote in an exquisite passage from Beloved as she considered the body as an instrument of sanity, joy, and self-respect a century after William James asserted in his groundbreaking work on how our bodies affect our feelings that “a purely disembodied human emotion is a nonentity,” lending the fledgling credibility of a young science to Walt Whitman’s poetic insistence that “the body includes and is the meaning, the main concern and includes and is the soul.”
That is what English poet Christy Ducker explores with uncommon sensitivity and lyric splendor in “A Scientist’s Advice on Healing.” A fine poet and a fine scholar who earned her Ph.D. while composing poems about the Victorian lighthouse keeper Grace Darling, Ducker embodies the animating spirit of The Universe in Verse and stands as a testament to Ursula K. Le Guin’s lovely insistence that “science describes accurately from outside, poetry describes accurately from inside, [and] both celebrate what they describe.”

The poem appears in Messenger (UK edition) — a slim collection of Ducker’s poems exploring “how we wound and how we heal,” drawing on the science of immunology in a collaboration with York’s Center for Chronic Disease, and featuring visual poetics by Sweeney, who also animated poet Linda France’s magnificent “Murmuration.”
Your body’s talk
is loose as lymph —
it’ll have you open out
as a tree,
or sneak up on pain
as assassin,
sidekick,
or wolf.
A SCIENTIST’S ADVICE ON HEALING
by Christy Ducker
Encourage this
for healing won’t come at you
straight.
Embrace the lack of heroics —
this isn’t Hollywood,
it’s you,
in a plot
that may
or may not resolve.

Change the subject,
before it’s too late.
Sketch out
what health
you do possess,
what signal-cascades,
what flotilla of cells
circumnavigate you,
[embedded content] 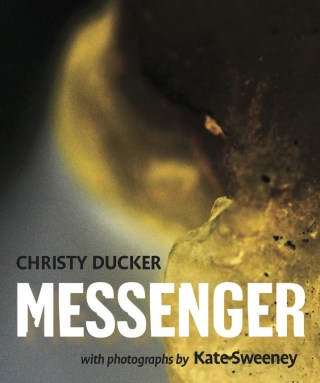 In this enchanting animated poem, Ducker joins visions with artist Kate Sweeney to deliver a soulful prescription partway between science and metaphor, between organ and instrument, as palliating to the physiology of illness as it is to the psychology of heartbreak:
then move
Couple with “Antidotes to Fear of Death” — astronomer and poet Rebecca Elson’s stunning cosmic salve for our creaturely tremblings of heart — then revisit Epictetus’s 2,000-year-old Stoic strategy for surviving heartbreak.
then draw yourself back
together again,
in a language
of your own.
When we speak of the heart breaking, we are speaking metaphorically, and yet anyone who has lived through heartbreak — that is, anyone who has lived at all — knows intimately the awful way in which the psychological condition of loss takes on the quality of physical pain. It is hardly surprising, then, that the body and the soul heal in consanguinity — the heart-as-metaphor heals the same way the heart-as-organ does.

There is such fertile ground for sensemaking in this space between biology and metaphor that we have always used our bodies as sensemaking instruments for the soul. But no part of the body has taken on more metaphorical meaning than the vital organ depicted in millennia of literature and song as the seat of love.
Try to accept
this fat red hurt
is your starting point,
in the way a pen must be put to paper
in one particular spot,