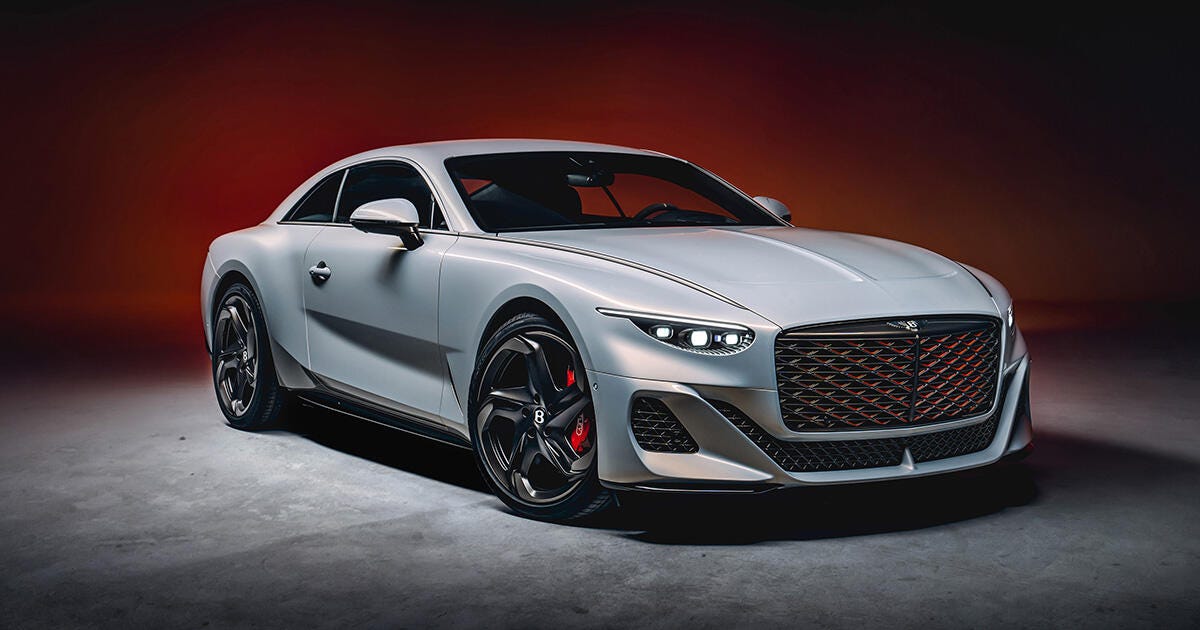 It’s harder to modify the interiors of modern coachbuilt cars — blame those pesky safety regulations — so the Batur’s cabin doesn’t differ too much from the Continental GT, but Mulliner is able to do a lot of wild stuff when it comes to the details. The Batur uses a number of sustainable materials like low-carbon leather from Scotland, carpets made from recycled yarn and a new carbon-fiber alternative Natural Fibre composite. The interior brightwork can be made from titanium, and some components, like the climate control organ stops, can be made from 3D-printed 18-karat gold.
Despite its totally custom body, the Batur is still limited by the constraints of the Continental GT’s platform. But electric platforms allow for a lot more freedom in terms of proportion and design, and the Batur’s styling themes will translate well to a number of different body styles and themes. What Mulliner will be able to do with future coachbuilt projects will be even more impressive, too. It’s a good time to be a Bentley customer.

This Batur combines Beluga leather with the low-carbon hide in a new Hyperactive Orange color, and there’s matching Dinamica suede throughout. The seats have the Batur’s signature chevron motif in Snap Orange to match the grille, which also contrasts with white threads. The dashboard and door panels have Piano Black trim that fades into a lighter, matte Fine Brodgar finish, and the fascia has a laser-etched sound wave that represents the W12’s exhaust note. Most components are made from anodized aluminum and satin titanium, and the 12 o’clock mark on the steering wheel and the rotary drive mode selector are 18-karat gold.
The Bonneville Pearlescent Silver paint is lovely.

The Batur has a seriously huge, more upright rectangular grille with a slightly rounded top edge, and the innards have a super complex diamond pattern with gradiented, colorful chevron accents. Instead of being round like pretty much every Bentley of the Volkswagen era, the Batur’s headlights are rounded at the bottom but feature an LED “brow” at the top, adding to the menacing look. There are large intakes in the lower bumper that give the Batur a sort of smile, and the hood has nicely integrated vents near the leading edge. Running along the length of the hood and flowing into the window trim is the “endless bonnet” line, which serves to visually elongate the profile of the car.
The Batur has a hatchback rear opening.

Bentley is only going to make 18 of the Batur, all of which have already been spoken for at a starting price of a skosh under million. Because the Batur is coachbuilt by hand at Mulliner’s facility in England, owners can pick from a basically endless list of paint colors, interior upholsteries and trim options, even working with Bentley’s designers on totally custom designs and finishes. First deliveries will start in the middle of 2023.
From some angles, the Batur’s greenhouse makes the car look a little stubby and tall — there’s a lot of mass over the rear wheel — but the rising lines that start from the triangular fender vent help the Batur achieve that tiger-like stance. The 22-inch wheels have a directional design that’s unique to each side, so the design points the same way no matter what side of the car you’re looking at, an expensive touch. The Batur’s rear end is nicely sculpted, with slim taillights that are the same shape as the headlights but elongated, a winged Bentley logo protruding from the tapered point of the tail, and an active spoiler at the base of the rounded hatch. I’m not so sure about the large swath of Black Crystal paint that makes up the bumper and the diffuser on this particular Batur; it should look more cohesive in a different finish or when paired with a different paint color. The Bonneville Pearlescent Silver body paint is superb, though.
More cars need gold trim. 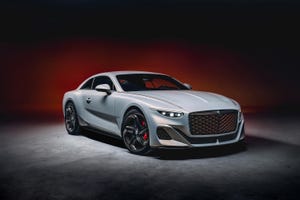